Steel in tune for acoustics 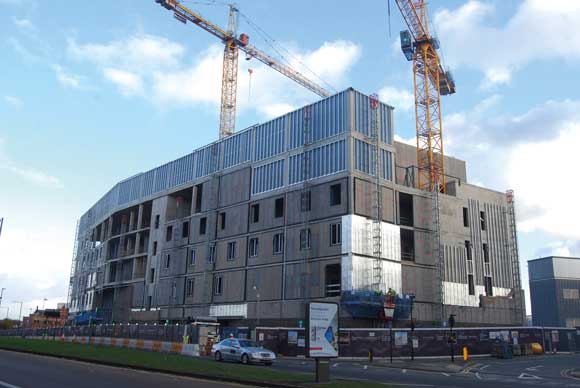 The frame is up and the cladding nears completion

FACT FILE
Birmingham Conservatoire
Main client: Birmingham City University
Architect: Feilden Clegg Bradley Studios
Main contractor: Galliford Try
Structural engineer: WYG
Steelwork contractor: Mifflin Construction
Steel tonnage: 450tFor the first time in nearly 30 years a music conservatoire (a college teaching classical music) is being built in the UK and, according to those involved in the project, it may well be the last for quite some time.

As well as being the kind of project that only comes along once in a working lifetime, unlike a regular college building, the construction and design of a conservatoire can be fiendishly difficult and challenging.

“Acoustics are the main driver for this project, being a conservatoire and not an ordinary college,” explains Galliford Try Senior Project Manager Keith Lilley. “All of the major performance spaces need to be totally isolated from each other and using structural steelwork was the ideal solution.”

To achieve the required acoustics, the design for this project involves the performance spaces being housed in five individual steel-framed boxes, each one independent from each other and from the surrounding main frame. Each box varies in size, but is based around columns spaced at 6m centres and importantly all of them are on acoustic pads. 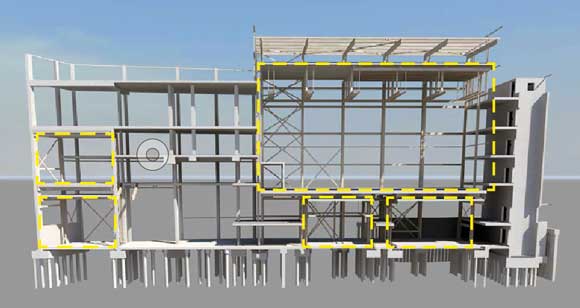 The biggest box houses the 400-seat Adrian Boult Hall [ABH], which will also accommodate a full orchestra. This is positioned above two smaller boxes accommodating a recital hall and an experimental music space. At the other end of the building, the other two boxes housing jazz and organ rooms are stacked on top of each other.

“Cost and buildability led us to choose a steel-framed option for the boxes, as initially the design was for a completely concrete-framed building,” says WYG Senior Engineer Ian Gill.

“The construction sequence is much easier to coordinate with steel as we have multiple steel columns in some locations, as close as 20mm in places, all on pads and supporting individual boxes.”

The project’s construction sequence for the steel boxes initially involved setting-out the acoustic pads and the base plates for the columns to be bolted down to. Once each of the individual steel frames was up, the lids, which are either formed with precast planks or metal decking, were then installed. The holding down bolts were then removed leaving the box just resting on the acoustic pads.

In this way the team has achieved the desired box within a box design whereby all the spaces are individually isolated from each other, as each steel-framed space is separated from its neighbour by insulation and a void of at least 20mm.

“We had to carefully sequence the erection process around the precast planks for the box roofs,” says Mifflin Construction Project Director Nigel Jones. “The steelwork is very complex with many columns extremely close to each other and so we always had to make sure there was enough space for the planks to be lifted into position.” 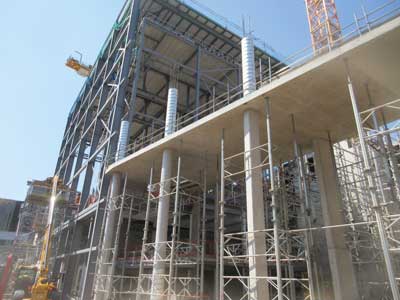 The ABH features a 400mm thick floor, while the ground floors of the other performance spaces have 200mm thick precast planks with a 100mm concrete topping. Above the metal decking or precast planks each space has a 300mm-thick insulation layer.

One of the reasons for the performance space being in a stacked layout was the desire for the ABH to have a high ceiling. The only way it could have its 17m-high floor-to-ceiling height was to stack it on top of other performance space boxes.

The lid/roof of the ABH is formed with precast planks supported by a series of 18m-long lattice girders that span the hall. Lattice girders were specified in the design as they will also support lighting and other equipment which will be slung from the steelwork’s bottom boom.

For convenience and ease of transportation, Mifflin brought the lattice girders to site piece small and assembled the elements on the ground before erecting them as complete members.

When the project team came to install the floor slab above the organ box roof it was discovered that there was little room for formwork so the design was quickly changed to a composite metal decking option.

“Space was so tight that the formwork could have been installed but, once the floor was cast, it would have been impossible to get it out,” comments Mr Lilley.

Wrapping around the ABH performance space there is an outer steel frame that supports the Conservatoire’s roof and is formed by a series of 30m-high 610UB columns. Acting as wind posts, these columns are positioned within millimetres of the box steelwork and form the walls of the main structure in conjunction with the reinforced concrete frame of the remaining parts of the building. These main steel columns are connected to the reinforced concrete frame and are also bolted directly to the project’s foundations as opposed to being on acoustic pads.

“These state-of-the-art facilities will offer current and prospective students unrivalled teaching provision. During its long history our world-renowned Birmingham Conservatoire has earned an international reputation for the excellence of its music teaching, research and performances. This new building, designed by leading architect Feilden Clegg Bradley Studios, provides us with a glorious opportunity to build on our proud history and continue to develop world-class music facilities for future generations,” sums up Birmingham City University Vice-Chancellor Professor Cliff Allan.

The project is scheduled for completion in July 2017.