The building forms the first phase of the Bothwell Exchange that will also include a second speculative commercial office block – currently in the planning stage – on the northern portion of the site.

Until it was demolished in 2007 the Albany Hotel, that was once famously dubbed Glasgow’s home to the stars, stood on the site. More recently a Holiday Inn occupied some of the plot, although today both of these concrete structures are long gone and only parts of the basement retaining wall remain where the second building will eventually stand.

Located at the gateway to Glasgow’s Central Business District, 122 Waterloo Street will provide 13,900m² of space over the basement, ground and the eight open-plan upper floors, all of which will extend to circa 1,700m².

HFD Property Group Managing Director Stephen Lewis says: “HFD is committed to sustainable development and 122 Waterloo Street aims to achieve an A rated EPC and a BREEAM ‘Excellent’ rating, making it one of the most energy efficient and sustainable buildings delivered into the Glasgow office market.”

The project is being funded by a combination of HFD’s own equity and development funding from Bank of Scotland. Alan Brennan, Relationship Director for Bank of Scotland Commercial Banking’s real estate team, says: “We have worked closely with HFD’s team for many years to support their growth ambitions and so we are pleased to be helping them bring forward this landmark development. 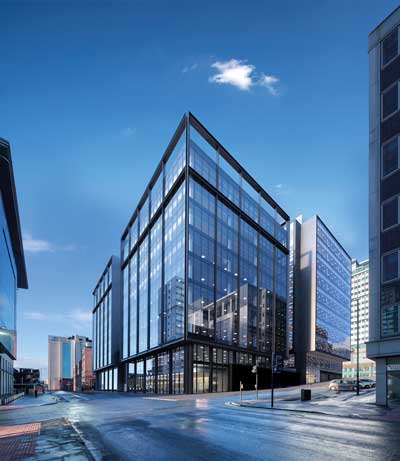 Steel design model showing the extensive use of cellular beams

“Bothwell Exchange is an important scheme for the city that underlines its status as a location of choice for leading international corporates.”

As with most high-profile, modern and desirable commercial schemes, 122 Waterloo Street features long clear column-free spans on all floors.

Michael Laird Architects’ Project Architect Tim Griffin says this was one of the main reasons for choosing a steel framing solution for this job.

“Steelwork has helped us obtain the required long flexible spans with no internal columns, while the use of cellular beams has integrated the services within the structural floor zone negating the need to increase the height of the building.”

A series of 17.25m-long UB sections, spaced at 6m centres, form the office floorplates. For the required efficiency and to accommodate all of the building’s services within the structural void, steelwork contractor BHC has fabricated service penetrations into these long-span beams.

To further maximise the column-free office space, the structure’s three precast cores have been offset along the north elevation, instead of being placed in a more traditional position towards the centre of the building.

Adding some extra useable space to the upper floors is a 1.5m-wide cantilever along the main south elevation overlooking Waterloo Street that extends upwards from the second floor

“Working in conjunction with the cores, the cantilevering front façade has portalised connections for added stability,” explains Woolgar Hunter Project Engineer Peter Hendry. “This forms a rigid frame along this entire elevation.”

All of the steel erection has been carried out with the site’s two tower cranes, with the heaviest steel lift being two 9t columns that extend upwards from the basement to the first floor.

Many of the loads from the building’s cantilever are directed down to the foundations via these two columns that are positioned either side of the cores.

“As well as the structural steelwork, we are also supplying and installing the precast elements for the cores together with the metal decking flooring,” says BHC Project Manager Eddie Brown.

To help speed up the erection process and allow the other follow-on trades to get started early, the project team has devised a sequential construction programme.

This has initially involved BHC erecting the steelwork for the entire footprint up to the second splice level, which is at floor five. Once this level was reached the metal decking was immediately installed and the floor cast to provide a safe working platform for the steel erection to continue for the uppermost levels.

Creating an architectural top to the building, the roof level is surrounded by what the team describes as a ‘crown detail’. Formed by a series of columns spaced at 6m centres this steelwork is not connected to the main steel frame, but is instead bolted to the concrete upstand as this provides better waterproofing.

The 4m-high columns are all connected by secondary members and support a black powder-coated aluminium cladding system.

“Surrounding the entire top of the building the crown feature gives the structure a distinctive standout skyline,” explains Mr Griffin.

122 Waterloo Street is due to be complete by October.