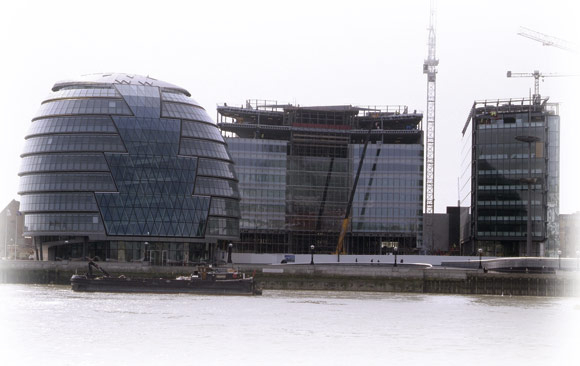 Plot 3 and 4 More London on the Southwark riverside (All photos: KS Photography)

Two steel framed structures are the latest buildings to be added to the burgeoning More London development. Martin Cooper reports.

Masterplanned by Foster and Partners, More London has planning consent for more than 280,000m² of business space which will include up to 186,000m² of Grade A offices accommodating nearly 20,000 workers.

As well as the Mayor of London, a number of high-profile firms have also moved their headquarters to the site, with more to follow as two new office blocks are nearing completion. 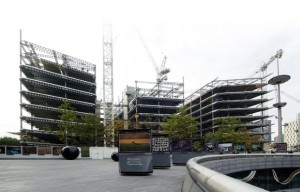 The larger Plot 3 will incorporate a glass covered atrium 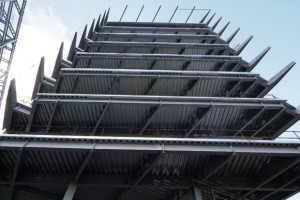 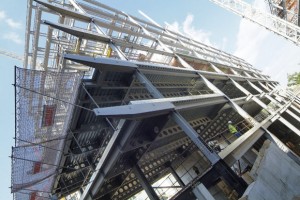 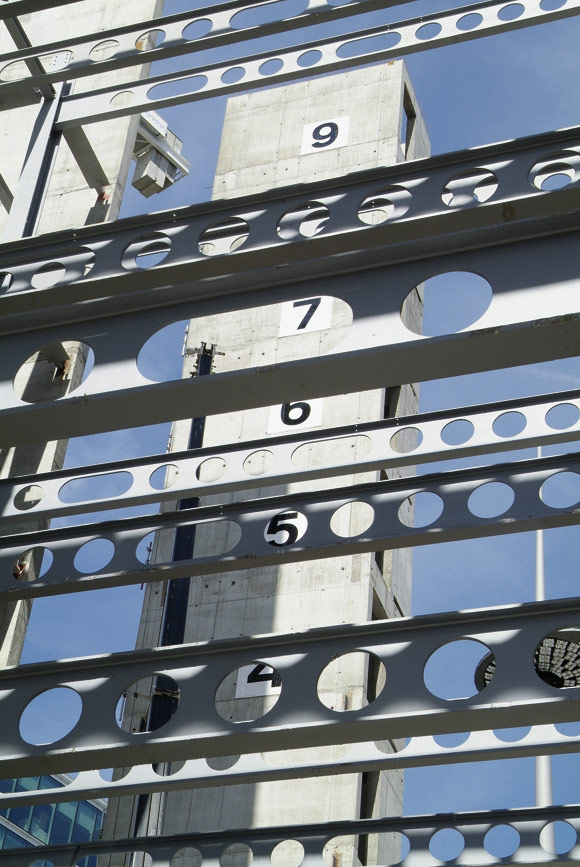 Fabsec beams were used throughout 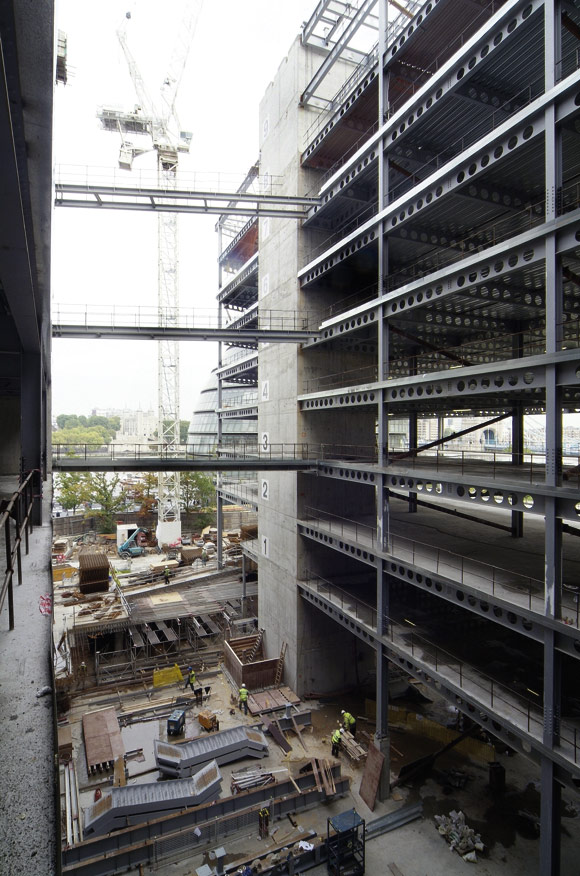 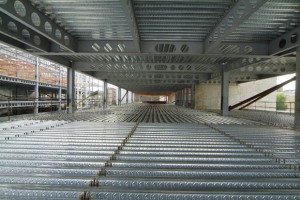 Metal decking was used on both plots

For example, international law firms Norton Rose and Lawrence Graham have committed to 3 and 4 More London Riverside respectively, as the locations for their new international headquarters. These two buildings – with a combined floor space of more than 50,000m² – will along with a couple of other structures, including a new Hilton Hotel, complete the entire development.

Initially known as Plots 3 and 4, both buildings are 10-storey steel framed structures from the lower ground level up, with 3 the largest with a footprint of 90m x 50m, while 4 is a slender office block measuring 81m-long x 18m wide.

Andrew Barrow, Mace’s Project Manager for the two plots explains the site is quite confined, as it is bordered by the River Thames to the north, Tooley street to the south, and existing buildings to the east and west.

“Piling and foundation work got underway in early 2005. Prior to steel construction we had to construct a haul road around Plot 4, to gain access to the larger Plot 3.”

Six concrete cores, three for each building, were formed by Laing O’Rourke, before any steelwork commenced. However, when steelwork did begin, Plot 3 was first off the mark. Both plots were completed by Christmas 2005, as the smaller Plot 4 had caught up by this time.

“It was important to get the steel structures done before the Christmas holidays,” Mr Barrow explains. “That gave the concrete roof time to cure before roof fit-out began in January.”

Steelwork contractor Severfield-Reeve erected both building’s frames in a two-floor sequence. Erecting columns to give a clear two-floor gap (8m) ahead of decking contractor Richard Lees, which followed behind.

“We delivered all steel to project in 20t loads,” Mr Lee says. “And bolted everything together on site.”

Mike King, Project Manager for structural engineers Arup says the experience of using Fabsec beams on other related More London plots meant it was an easy decision to use them on Plots 3 & 4. “The decision was made very early in the design stage,” he says.

“Fabsec beams offer a more efficient system for floor build-up as they have ducts to carry services,” Mr King adds. “Otherwise the build-up would be greater as the services would have to run beneath the beams.”

Mr Barrow backs this up and adds that another important factor in favour of the Fabsec beams is that they were coated with intumescent paint prior to being delivered to site and this meant less work to do on the project.

“One less trade on site is very important, especially on a worksite with limited space,” Mr Barrow explains.

Plot 3 is basically a U-shaped structure, with the open end facing the river front and containing a glass covered atrium. Severfield installed an array of steel columns and beams, but an interesting feature of this building is the glass roof covering the atrium.

Severfield installed two large cantilever box girders, each weighing 15t, to support this glass canopy. A further four 20m-long beams support the canopy over a ninth floor balcony. Cladding contractor for Plot 3, Permasteelalissa, supplied and erected the architectural steelwork for the balcony itself.

Meanwhile, traversing the atrium are three bridges situated on the third, fifth and seventh floors. Each of these steel bridges were initially constructed by installing two 18m-long beams, situated 2.5m apart and then bolting in the intermediate cross beams.

Plot 4 is a narrow structure compared to its neighbour, but did present the contractors with an interesting architectural design feature. This building has a floor grid plan of 9m x 6m and was constructed with Fabsec beams and 356mm x 406mm columns.

On each of the four corners of every floor there is a protruding steel fin. This architectural feature is made with a 1.5t 8m-long cantilever steel plate box girder member jutting out from the structure’s main perimeter beam. A further 12 of these fins have been installed on the roof to support a canopy.

As Mr Barrow says, the feature fins will give Plot 4 a distinctive look, but getting the cladding to fit was a little problematical. Cladding contractor on this part of the project is Schmidlin, and they’ve supplied glass units that when bolted into position, will completely surround the fins.

Mr Barrow explains that steelwork around the central core was started first as there’s a lot surrounding the risers and lifts. “This progressed in a similar sequence to Plot 3, but with the core always ahead of the rest of the steelwork, and this in turn always two floors ahead of the decking installation.

Shell and core completion will occur this Summer, with occupation scheduled for Spring 2007 following the tenants fit out of the building. Once construction work has finished the haul road will be dug up and landscaped to form a centre piece garden.

Interestingly, this will contribute to More London’s variety of public spaces, which have opened up a previously derelict area of the South Bank.