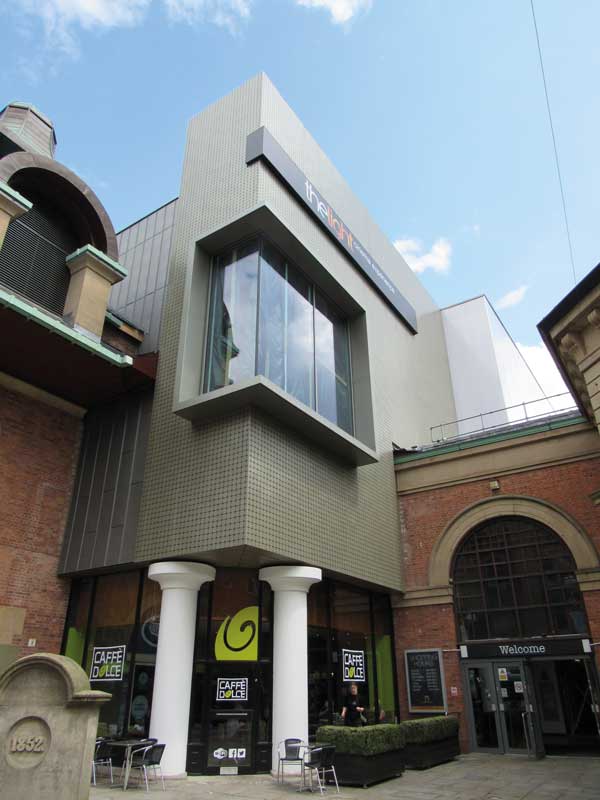 An historic shopping centre has undergone a major transformation with the addition of a cinema complex along with the internal re-structuring of the central atrium.

The overall concept for the redevelopment was to provide further restaurants, bars and cafés in the re-structured underground Victorian arched vaults, enlarging the central feature atrium and the addition of a steel-framed cinema extension on the roof.

“A steel-framed solution was essential to facilitate the continued operation of the shopping centre,” says Shipley Structures Director Glynn Shepperson.

“The steel frame also provided a slim skeleton for the upper cinema extension, which maximised the internal auditoria and general amenity areas.”

Grade S355 steel sections were used throughout in order to minimise the steel weight, which was transferred through the existing structure to basement level.

The transfer of the increased dead and imposed loads from the new 10m-high upper cinema extension through the existing steel-framed structure below necessitated the adaption and strengthening of the existing steelwork components.

“The big challenge from an architectural perspective was how to squeeze auditoria spaces into a restricted space. In the design of auditoria, height is of fundamental importance and at Bolton we designed screens that maximised both the viewable area and the maximum possible seating numbers for nine screens,” explains Wren Architecture and Design Associate Lee Dyball.

The re-structuring of the central atrium area included the provision of a fully welded 21m-high exposed feature steel liftshaft, infill link bridges and the creation of new escalator floor openings.

The remodelling works unite all four main components of the building; the Grade II listed Market Hall to the south, the 1980s Shopping Centre extension to the north, the Victorian basement vaults and the newly created roof-mounted cinema.

The completed building is now a key focal point in the town centre and a testament to all parties involved.

“Steel was selected as it offered the most flexibility for the desired extension and because the existing structure was a steel frame,” says McLaren Construction Senior Planner Jamie Heptonstall.

“The transfer of loads to the existing foundations without unnecessarily disrupting shopping centre operations naturally led to the continuation of this mode of structure.”

Survey works to establish existing connections were undertaken and connections made back to the existing frame. However one of the challenges was that, despite being constructed in the 1980s, the information was not accurate and sections of the frame were found to be as much as 30mm out of position.

Due to the flexibility of the steel frame, baseplate design was adapted and members lengthened or shortened to suit the new structure.

Construction was particularly demanding because the Centre was required to function throughout the contract period. The tower crane reached only 60% of the works, so many components had to be manhandled into position. The tough logistical challenge was met in a meritorious way, say the judges.