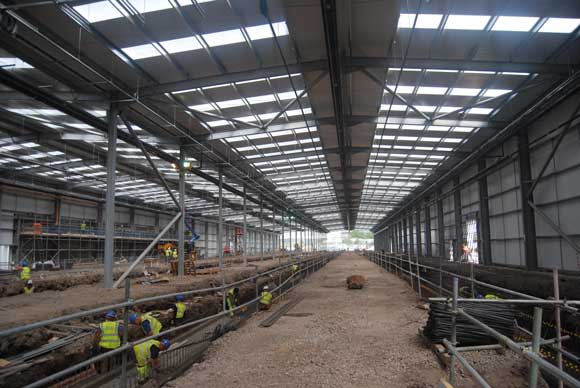 A twin portal frame was chosen as the most efficient design

Having secured a contract to manufacture trains for London’s Crossrail, Bombardier is constructing a new steel-framed train inspection building.

All of this rolling stock will be produced at the company’s Derby facility where Bombardier is currently readying itself for the onset in 2016 of this major contract.

As part of the manufacturing process, all of the trains will be rigorously tested in a brand new 10,400m² Inspection and Showroom Building known as the V-shop.

Works including the construction of the four multi-functional train lines, each with full length overhead lines and inspection pits, and the connection into the existing test track also falls within Balfour Beatty’s contractual remit.

On the design of the building, CPMG Senior Architect Martin Ford says: “The building has been designed around the specific needs of Bombardier as it has to accommodate four lines of 10 carriages.”

In order to construct a building around these requirements, a twin-portal was deemed to be the best choice.

“Steelwork was then chosen primarily for its speed and efficiency,” he adds. “As well as its simplicity in constructing these types of large sheds.”

The new building is located on a brownfield site within the large Derby train manufacturing yard. Over the years, the land has played host to workshops, a railway turntable and most recently a staff car park.

One of the first tasks Balfour Beatty had to do on site was to rip up the old foundations in order to prepare the ground for the installation of piles and then the steel frame.

“There is a lot of made-ground of varying depths on this site and so a ground improvement programme involving compaction was undertaken,” explains Scott Hughes Design Director Colin Riches.

Pad foundations were then installed to a maximum depth of only 1.6m, much shallower than would have been required if the ground had not been improved.

As structural steelwork was always the material of choice for this job, Mr Riches adds that no other framing solution could afford the building’s required 20m clear spans, while spreading the loads efficiently.

Once the project’s architect and structural engineer had completed an initial design for the client and main contractor, the steelwork part of the job was then handed over to Border Steelwork Structures (BSS). 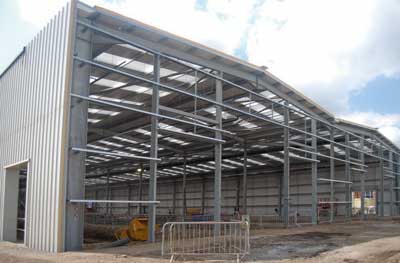 BSS then refined the steelwork design by repositioning some vertical bracing and designing the frame’s connections.

As well as designing, fabricating, supplying and erecting the steelwork, BSS have also installed all of the roof and wall cladding for the building.

“Due to the length of the building, splitting the erection sequence into thirds allowed the follow-on trades to get started sooner,” explains BSS Senior Contracts Manager Stuart Airey.

The follow-on trades working behind the steel erection gang included the excavation of four inspection pits that run the length of the structure beneath the rail lines. This work followed the steel erection as it would have hindered and limited the amount of space where BSS could have put its cranes and MEWPs.

The cladding team following on immediately behind the steel erection meant the excavation work for the inspection pits was mostly done in a watertight environment, which in turn negated the possibility of the trenches flooding in the event of rain.

All steel columns are spaced at 8.3m centres as this was decided as the most efficient grid pattern and one where cladding panels would not have to be too large.

Each of the portal spans is formed with two 12m-long rafters that were bolted together on the ground and lifted into place as one complete 24m-long roof section.

The south west corner of the building has an attached two-level office block that measures 24m-long × 9m wide.

The ground floor will accommodate staff canteen, toilets and changing facilities, while the upper floor will have offices and a boardroom with a viewing platform overlooking the workshop.

“The two rail lines and trenches closest to the office block and the viewing area will serve as sales and inspection pits, where the completed trains will be presented and viewed by Crossrail representatives,” explains Mr Ford.

“The viewing platforms serve a useful purpose while being the visual connection between offices and workshop.”

Meanwhile the other rail lines and their inspection pits will serve as testing areas for the trains’ electrics and as areas for the painting work to be finished off.

The V-shop is scheduled to be completed in April 2016. 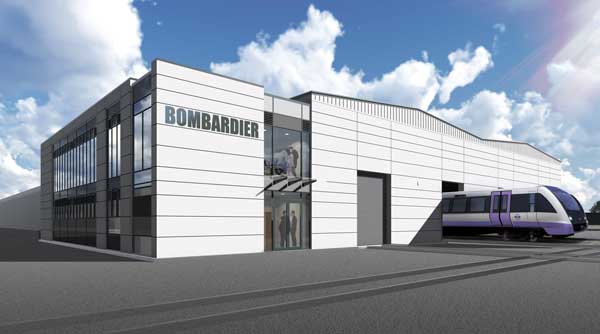 Rail technology leader Bombardier Transportation has signed a contract with Transport for London for the provision of 66 new trains for the flagship London Crossrail project.

The new trains, to be built at Bombardier’s Derby site, will support 840 UK manufacturing jobs including 80 apprenticeships.

The state-of-the-art Aventra trains for Crossrail will be over 200m in length and will be able to carry up to 1,500 passengers. Key features of the new high-capacity trains include air-conditioning and interconnecting walk-through carriages.

On-train passenger information systems will deliver real-time travel information to allow passengers to plan their onward journeys. The trains have been designed with an emphasis on energy-efficiency and the use of intelligent on-train energy management systems.