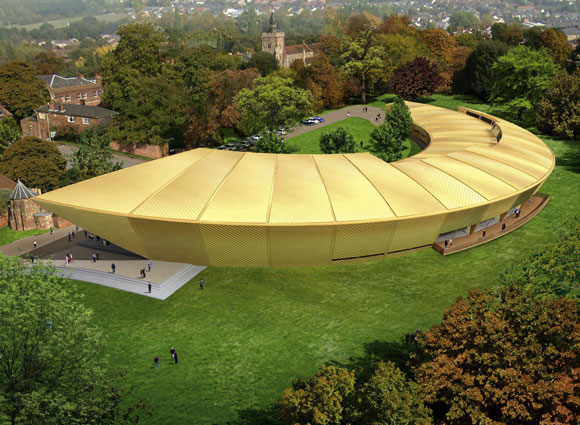 The gallery will be covered in a copper coloured cladding

A visually stunning ammonite-shaped art gallery featuring no internal columns and a frame which gets progressively higher and wider is under construction in Colchester. Martin Cooper reports.

Nestled in the middle of Colchester’s historic town centre a new and exciting arts building, known as firstsite:newsite, is rapidly taking shape.

Architects Rafael Viñoly, says the distinctive crescent shape of the structure derives from the available space, while its dramatic copper cladding will give a social as well as architectural impact.

The scheme has been funded by a partnership of Arts Council England East, East of England Development Agency, Essex County Council and Colchester Borough Council. This  ambitious partnership aims to create a new visual arts building with regional, national and international significance.

The project is based on the success of the popular contemporary arts organisation firstsite, which is currently housed in an adjacent property.

The new building, firstsite:newsite, will build on this success and offer a wider programme of local artists work and exhibitions as well as providing a permanent space for the University of Essex Collection of Latin American Art. There will also be an evening restaurant and a fully equipped auditorium.

It is hoped that the scheme will also act as the catalyst for a £250M redevelopment of the ancient Roman town’s run-down east end. The building is expected to attract more than half a million pounds of Arts Council and other funders’ investment into the town. 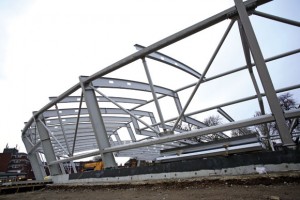 The perimeter columns lean out at progressively larger degrees 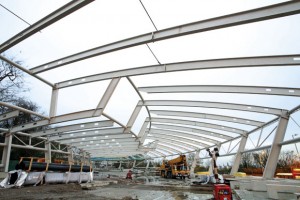 The roof rafters all incorporate a step 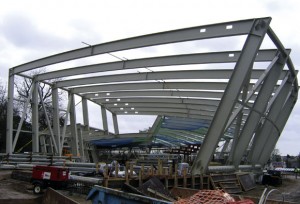 The gallery gets wider and higher from east to west 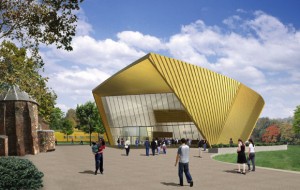 Work on site began early last Summer and John Gerrard, Associate Director for Adams Kara Taylor, structural engineers for the project, says one of the initial challenges was the fact that it is located on a Scheduled Ancient Monument (SAM).

“This means the ground beneath the site is likely to contain Roman ruins of archaeological interest and cannot be disturbed,” explains Mr Gerrard.

Consequently, deep foundations and piles were out of the question; so a flexible raft foundation with a stiff perimeter ring beam sitting on imported fill was investigated and adopted. To avoid high foundation loads the building was limited to a single storey and the 4,500m² structure is built off the slab.

Dave Poole, Project Manager of steelwork contractor SH Structures, says because there are no piles, designing the connections was a lengthy process.

“The structure has to derive its stability from the connections at the column tops where there was a fairly restricted zone within which to work,” says Mr Poole.

The roof cladding sits directly above the roof rafters leaving little or no room for connections. Consequently, many of the connections are actually within depth of the rafters as a suspended ceiling also meant there was limited room beneath the roof.

However, it was also the eye-catching shape of the structure’s frame which meant it was interesting to design and erect. “All the members are different and every portal frame span has a different radius and length, they are all bespoke,” explains Mr Gerrard.

Mr Poole adds: “The unusual shape of the structure, particularly the way it curves on plan, makes it resemble an ammonite. But the complex part of the steelwork is the fact that the perimeter columns all crank out at progressively larger degrees from east to west, while the building also gets wider and higher in the same direction.”

Beginning at the eastern end, the structure’s height is 5m but this gradually increases to culminate at a 12m high cantilevered entrance at the western end. Meanwhile the southern elevation, the longer of the two sides at 162m, features perimeter columns which lean out progressively from 11-degrees to 27-degrees east to west – thus twisting the already complex cladding faces.

Meanwhile, the inside elevation, or northern side, is shorter at 90m and its perimeter columns aren’t cranked out as much as the southern elevation.

As there are no internal columns, the roof, which has spans of up to 36m at the entrance, was erected with a number of long rafters, which were spliced in the middle. These cranked portal rafters also incorporate a step in their configuration. This step will allow ventilation to the gallery via clerestory.

Dave Chadwick, SH Structures’ Site Engineer, explains that there was quite a complicated procedure to erect these long rafters.

“Using two mobile cranes, we had to support the adjacent perimeter columns with guys while a rafter was lifted into position. Once both sections of the stepped rafter were bolted together, we then bolted down the cranked columns, untied the guys and in-filled with secondary beams and columns,” he explains.

For the longer southern elevation the 18 main columns are spaced at 9m centres. In-filling beams consist of tubular cross members, while cross bracing was also needed at the top of the elevations.

Possibly the most impressive element of the building, and certainly the one visitors to the finished gallery will notice, is the cantilevered entrance.

“We had to fabricate and erect a large plate girder to form this entrance,” says Mr Poole. “This large section carries finger members which ultimately cantilever off it.”

In summary, Mr Poole says one of the biggest headaches, as far as design was concerned, was the geometry of the project. “It’s never planar and everything had to be calculated to encompass the true curves and twist required for developing the ever changing cladding.”