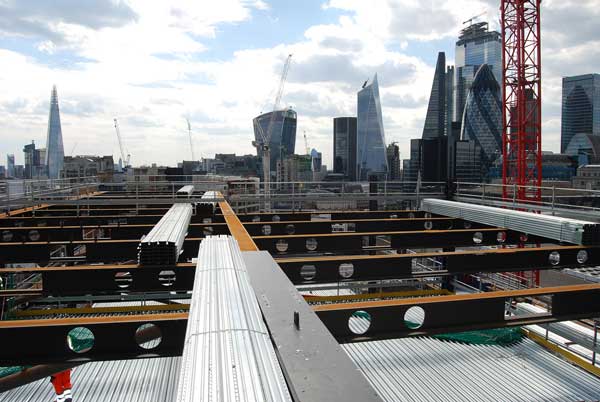 Located on the edge of the City of London, a 21-storey commercial building represents Phase 2 of a prestigious Aldgate redevelopment scheme.

A number of large developments have sprung up in recent times, choosing the area because of its proximity to the square mile and London’s other financial district of Canary Wharf as well as its good and varied transportation links.

One of these schemes is located above Aldgate East underground station, where work is currently underway on Phase 2 of Aldgate Developments’ masterplan.

Sat on a plot formerly occupied by Beagle House, main contractor McLaughlin & Harvey (McL&H) started onsite in August 2018 on what is its largest London project to date. The company inherited a cleared site, as the demolition had been completed by another contractor, along with the installation of the two-level deep concrete basement.

“As much of the preliminary works had been done, our first task was to complete the basement structure to ground floor level and construct the concrete core, in preparation for the steelwork erection to begin,” explains McL&H Site Manager Darren Donnelly. 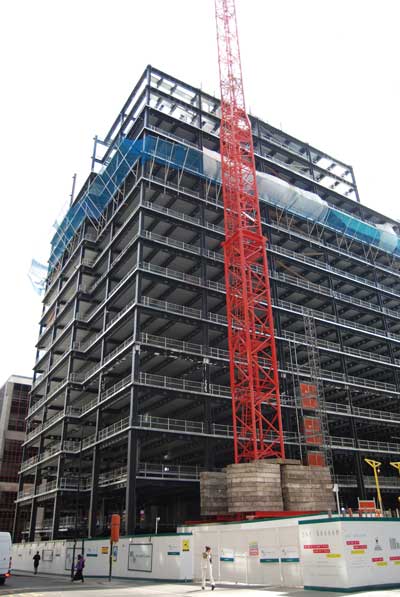 Shallow plate girders have been used throughout the building 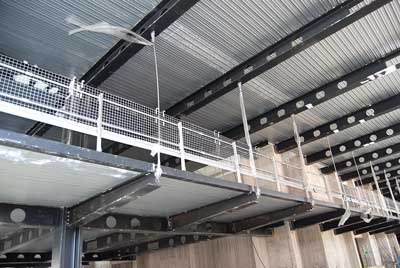 A cantilevering walkway overlooks the entrance and is suspended via hangers 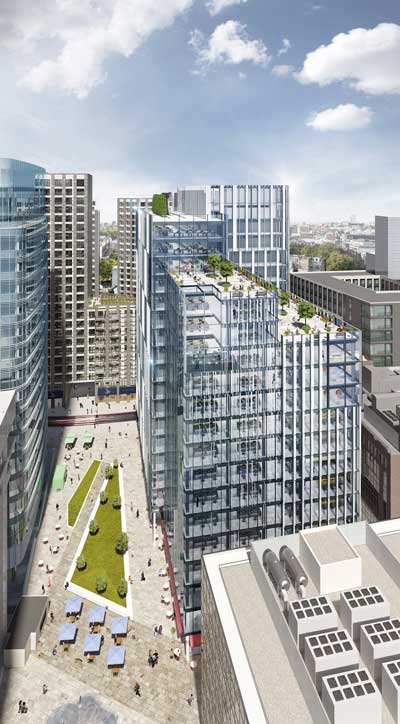 One Braham sits to the south of a new public realm

Model showing the northern elevation, which contains the core and the parts of the block that reach full height

The steel frame begins at ground floor level and is based around a grid that has primary columns spaced at 9m centres with internal spans of up to 13.7m.

According to Arup Project Engineer Catriona Gillies, the building has a very constrained structural depth, resulting from planning restrictions that aim to preserve some key landmark views that would otherwise be obscured by One Braham.

Keeping within a permitted height, the design has used fabricated plate girders to support the metal deck flooring system. These girders have bespoke holes to allow all of the services to be accommodated within their depth.

Overall, the scheme adopts a contemporary office feel with exposed soffits throughout. Much of the completed steel frame will also be left exposed and so a lot of care has been taken to the connection details.

“The building is our second office building for the same client in the same locality. The client’s brief requested a much more ‘industrial feel’ to the building following their experience letting Aldgate Tower where many of the tenants have chosen to remove the suspended ceiling and expose the structure,” explains WilkinsonEyre Director Oliver Tyler.

“This has led to an architectural approach, whereby the structural steel frame and steel decking forming the floors has been exposed. This has resulted in much closer attention being paid to steel connections and the detailing and setting out of services and their penetrations through the beams.”

The design team say that greater care than normal has been paid to the detail and location of column splice joints, beam-to-column connections and the detail of steel suspension hangers.

“Great care has also been taken in working with McL&H and Severfield to specify the black paint finish, taking into account the exposed nature of the steel within the finished building,” adds Mr Tyler.

For stability, the building features one concrete core, which is offset and positioned along the southern elevation. This not only maximises the available floor space on each level, but also creates an ‘active’ front to the building, as the core contains a scenic lift and staircase, which will be visible through the glazed cladding.

“The position of the core is also about the massing of the structure as it is located in the portion of the building that reaches the maximum height,” explains Ms Gillies.

On plan, the rectangular structure is divided into four blocks with two portions on the northern elevation topping out at levels 15 and 17 respectively. Meanwhile, on the southern façade, there is a further rooftop step as one portion accommodates a two-level plant deck.

To help create the 15th floor step in the building, two large transfer girders with depths of 590mm and each weighing 11.5t have been installed to support the set-back columns above. In order to accommodate the girders into the overall shallow floor design, the beam’s top flanges are exposed to the structural slab level with no concrete topping.

The step at floor 17 is close to primary columns so the floor edge is cantilevered and does not require transfer beams. The uppermost step at roof level supports two plant decks, which is off the main column line. A transfer beam is included here as there is greater structural depth available.

Meanwhile, the ground floor is a double-height space, accommodating the entrance lobby. The first floor, which is set back to create this large space, accommodates a cantilevering walkway overlooking the entrance. Large portions of the floor are suspended from the underside of the second floor via a series of Macalloy hangers and steel plate hangars to form recessed low level façades.

Richard Henderson of the SCI discusses some of the design issues

Riveted plate girders dating from Victorian times in use for long span railway bridges can still be seen. Flanges are laminated from plates and riveted angles connect flanges to webs and webs to stiffeners. Material was expensive and many such structures clearly show the distribution of internal forces.

Plate girders continue to be used for long spans and high loads (such as transfer beams in buildings) and also for elements required to meet particular geometric constraints that mean rolled sections are not suitable. Material cost is relatively less significant now and plates are more often of uniform thickness. For design, the relevant part of Eurocode 3 is part 1-5 Plated structural elements.

The possible combinations of plate size and thickness mean that phenomena not usually encountered with rolled sections may need to be considered. Wide flanges result in shear lag – where the shear flexibility of the flange outstands leads to corresponding non-uniform axial stresses across the flange. This behaviour is more relevant to box girders (eg in bridges) than in I section girders. Slender flange outstands may also lead to local buckling of the flange edges and require a design based on effective area, although use of material in such a design may not be considered efficient.

Designers of plate girders not susceptible to fatigue could use P419 (1) when considering the thickness and toughness requirements of flanges. A “hybrid” approach is possible with high strength steel for flanges and a lower strength steel for the web (2). Plate girders with a web depth selected to reduce flanges to manageable sizes may mean the section classification is 4 (slender) and the webs are susceptible to shear buckling.

Selecting webs thick enough to avoid this may not be an efficient use of material and stiffeners have to be provided. Thin webs may also mean that bearing stiffeners are required to transfer local point loads into the girder web. Plate girders with stiffened webs may therefore be an effective choice (3). Tension field behaviour where the webs act like diagonal tension members and the stiffeners the verticals in a Pratt truss may result and require the corresponding design approach.

In buildings, deep girders designed as pin ended will require careful consideration of the end connections. Finally, in addition to sizing the plates, the web to flange welds and welds to stiffeners are the designer’s responsibility.