Sustainability in action on City of London development 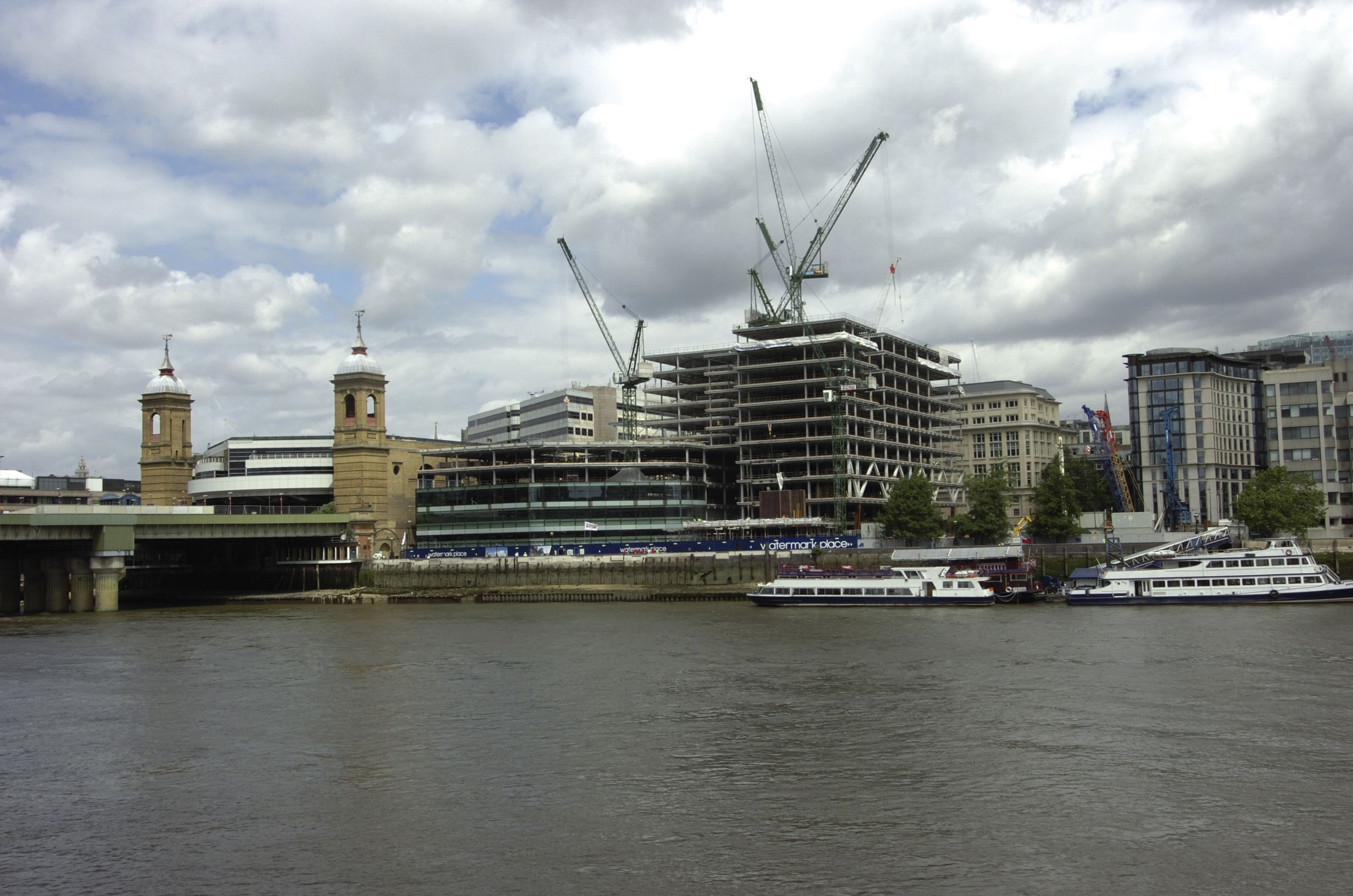 Extensive re-use of an existing basement as well as the refurbishment of a fire station are just some of the features of a prestigious City of London development, writes Martin Cooper.

Current commercial property market conditions aside, London still has a number of prestigious office developments under way and in the planning stage. One of the most visible, at least from a riverside vantage point, is Watermark Place, a speculative 11-storey office development  – with three basement levels – rising up adjacent to Cannon Street railway bridge.

The original building and the constraints of a tight inner city site all played a significant role in the design and construction of Watermark Place. Only state of the art commercial developments take place on expensive City sites these days, which means long spans, and maximising floor to ceiling heights by keeping services within the structural void – hence the use of 4,500 tonnes of Fabsec cellular steel beams in this building.

“More than 100,000m³ of concrete went into the construction of Mondial House and the basement raft is 2.5m thick,” explains Julian Traxler, Senior Associate Director for Waterman Structures. “It made sense, both structurally and economically, to re-use the existing raft foundation and the 1m-thick basement retaining walls for the new building.

“The new building has two more floors than the original structure but because we are using steel as the framing material it’s also a lot lighter.” All Fabsec beams have also been painted off site with intumescent paint for 90 minutes fire protection. 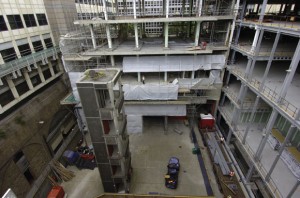 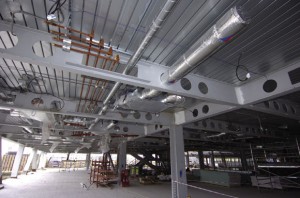 More than 4,500t of Fabsec cellular beams have been used 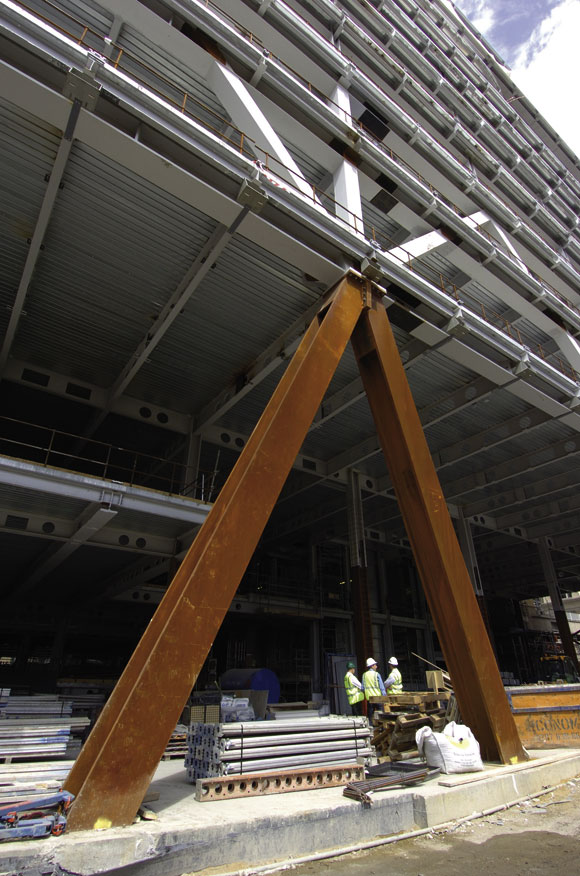 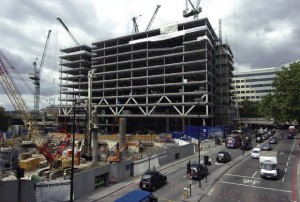 The raft was extensively back analysed for the new loading arrangements and the new superstructure solution was chosen to limit the weight to match the existing performance. An extensive suite of sampling and testing was also carried out on the retained structure to ascertain the condition and strength of the concrete and reinforcement.

Re-using as much of the original structure as possible has been an integral part of the design process and 98% of the materials have been recycled, with 31% by mass reused. At one end of the project’s 105m x 83m footprint a large section of suspended basement slabs as well as the basement box have also been retained. All of this sustainable design work has helped the project achieve a BREEAM ‘Excellent’ rating.

An interesting side issue, but very much part of the project, is the operational fire station fronting the Upper Thames Street elevation. Although not structurally part of the old building, this seven-storey concrete framed building is being reformed and refurbished with steel, and the four upper levels (not part of the fire station) will be incorporated into Watermark Place. “Once the cladding is up the two structures will look like one,” explains Mr Traxler.

The steelwork in the fire station consists of drilling into the existing concrete superstructure and installing new steel columns to accommodate slab extensions as well as cutting back and relocating hanging steel columns.

“We’ve also installed new columns up against the existing concrete members supporting new steel beams to stiffen the floors around new structural openings,” says Geoff Laskey, Severfield-Reeve Contracts Manager. “All of this work has been carried out above a fully operating fire station which has been a logistical challenge.”

Although the majority of the project consists of an 11-storey office building, a portion of the building, at the river frontage, only goes up to sixth floor level. This structural step was incorporated because of St Paul’s Cathedral sight lines as building regulations specify that the view of the cathedral from Shooters Hill in South East London must not be obscured.

The structure’s steel frame – which was erected ahead of schedule – derives its stability from five braced cores, while the centre of the building features a large, full height atrium, supplemented by satellite atriums which will allow plentiful natural daylight into the heart of the office block.

One of the most striking features of the development is the eastern facade which accommodates the main 40m-long x 10m high entrance and reception area. In order to get a double height entrance area a two storey high truss is positioned along the entire east facade of the building at third and fourth floor levels.

The truss was made from 450mm fabricated box sections by Severfield Reeve’s sister company Watson Steel Structures and was brought to site in eight 40t sections, each up to 5m wide x 22m long.

“The main structure’s steelwork had to be up to level three before we erected the lower section of the truss as we had to have something to tie it back to,” explains Mr Laskey.

Using one 400t capacity mobile crane, the lower four sections of the truss were installed over one weekend. The four sections consisted of a bottom and top cord and all the vertical and diagonal members. Each section was welded and bolted into place, while all splice locations required temporary trestles and props which were moved once the truss was in position.

After the main steelwork had reached the fourth level the procedure was once again carried out with the upper sections of the truss. “The real difference was the upper sections didn’t have bottom cords as the truss sections below had that. We just had to bolt the longitudinal pieces together and weld the diagonals.” says Mr Laskey.

The truss is supported on three raking columns which allow and open up a relatively column-free ground floor entrance area. The columns are huge and need to be – 800mm x 800mm fabricated box sections – and are all set at slightly different angles giving the facade a unique architectural look.

The raking columns founding on the retaining wall also avoid the archaeological risk issues along the facade associated with piling through ancient river walls. Consequently, these raking members are founded on a capping beam, which in turn is supported by lateral props which take out the horizontal thrust, and strengthened columns which go down through the basement levels. A new concrete wall lining was introduced to aid spreading the load down to the raft.

Aside from the double height entrance the remainder of the steel frame is based around a 15m x 7.5m grid pattern. The long spans associated with modern offices and the need to maximise floor to ceiling heights by keeping all services in the structural void meant that 4,500t of Fabsec cellular beams have been used throughout the structure. “All floors, including the majority of the basement levels have cellular beams,” adds Mr Laskey.

Perimeter columns along all the building’s elevations are set back and large robust edge beams have used to control deflections for the cladding. Each elevation also features cantilevers which vary from 500mm up to a maximum of 2.7m. There is an exception to this along Upper Thames Street, to avoid piling through a subterranean ancient monument, the cantilevers on elevation are typically 3.3m.

Summing up the project, Bob Kay, Chief Engineer for Sir Robert McAlpine, says: “This will be a prestigious building with stunning riverfront views and in keeping with modern and sustainable construction methods Watermark Place will also be topped with a green sedum roof, which will alleviate rainwater run-off and photo voltaic panels which will increase the building’s energy efficiency.”

Watermark Place is scheduled for completion in July 2009.