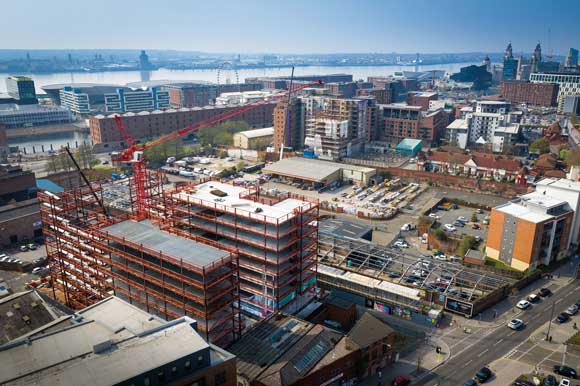 A residential scheme in Liverpool’s creative and digital quarter is using a steel framing solution due to the material’s spanning qualities and ability to create complex details. Martin Cooper reports.

FACT FILE
Blundell Street residential scheme, Liverpool
Main client: Brickland
Architect: Tim Groom Architects
Main contractor: ISG
Structural engineer: Clancy Consulting
Steelwork contractor: Walter Watson
Steel tonnage: 1,200tLiverpool has become something of a byword for regeneration in the UK as a myriad of projects have either been completed or are currently transforming the port city into a viable and important economic centre.

One area that has been a focus for redevelopment is the Baltic Triangle, which occupies a pivotal location just south of the city centre and is positioned between a number of Liverpool’s other strategic regeneration investments.

Historically, the area was used to handle goods being transported via the docks as well as being a thriving industrial area. By the 1970s, with much of the port in decline, many of its former warehouses had become derelict, with some of them being demolished and replaced with small scale industrial units.

Since 2012, more than £128M has been invested in new developments within the Baltic Triangle, with a further £62M currently on site.

Consequently, the area has been transformed and now accommodates an eclectic mix of indigenous businesses such as car repair workshops, mechanics, welders and tradespeople. These sit alongside the newer creative businesses such as digital media agencies, PR companies, architects, designers and musicians which have arrived over the last decade. 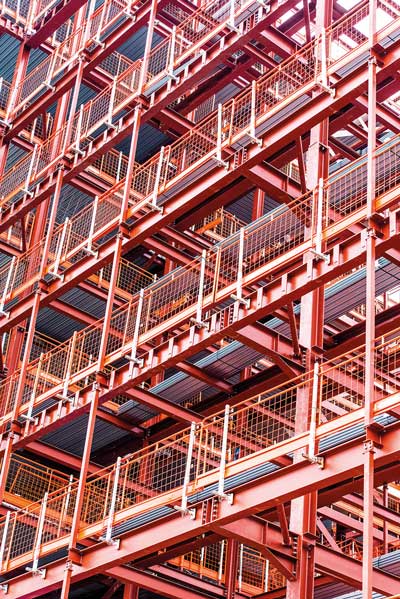 Steel was chosen for its spanning qualities 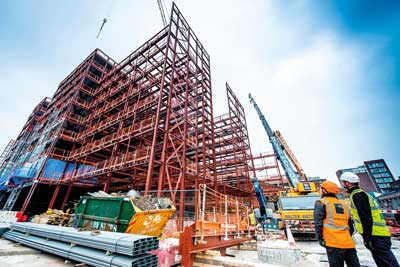 The outer tips are slightly lower at seven-storeys high 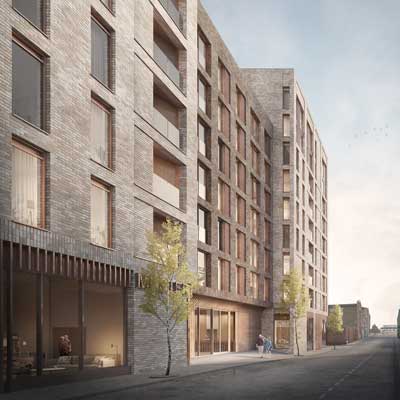 One of these residential schemes is currently being constructed by ISG and consists of a nine-storey, 200-unit apartment block with a project value of £24M.

Located on Blundell Street, the steel-framed structure also includes two levels of basement car parking, with the uppermost of these floors also accommodating an entrance lobby, resident’s lounge and gym.

The project’s plot was previously used as a surface car park and when ISG started work on site last year minimal groundworks were required before the steel erection began.

“Typical for a Liverpool site, there is sandstone directly below the surface, which has excellent load bearing qualities. This meant we only needed to install a series of 1,200mm-deep pad foundations,” explains ISG Project Manager Ross Sangster.

ISG has recently completed a similar scheme near Liverpool’s Lime Street station and a number of lessons learnt on that job have been used on this scheme.

The most important of these lessons was the off-setting of the steel frame from the site boundary, which avoided complex temporary works and prevented intrusive works on the highways.

Favourable ground conditions along the site boundaries allowed the project team to utilise the rock and existing brick retaining walls to keep the excavations for the basement car park open and allow for the placement of bases and the steel frame.

As Clancy Consulting Engineer Callum Sale explains: “This meant none of the existing walls needed to be demolished, which saved valuable time on programme.

“Temporary propping was further limited by utilising the steel frame to provide fixing points to temporary perimeter props, which assisted in restraining an existing retaining wall as well as providing the contractor with valuable working space.”

The residential block is U-shaped on plan, with the open end facing northwards. The opening leads directly to a landscaped courtyard, which is supported – along with residences – by the ground floor podium deck.

The majority of the structure reaches the maximum nine-storeys, apart from two seven-storey sections at the two outer tips.

Using a column grid of 8.9m × 7.5m for the entire car park and residential zones, the structural design uses shallow floor-to-floor depths in conjunction with long span beams, and uses UC sections around the perimeter, as opposed to traditional UBs.

There is network of dropped (lower) slabs for balconies and roof terraces within a very tight structural zone. This results in a complex arrangement of secondary steelwork that required a high level of coordination between the designers and steelwork contractor Walter Watson.

“A steel framing solution was considered as the most appropriate option given the size of spans between columns and in terms of achieving the complex perimeter details, particularly to inset balconies due to the material’s flexibility,” says Mr Sale.

Stability for the steel frame is provided by a combination of traditional flat bar cross bracing in the lower floors and moment frames for the two upper levels.

This hybrid design was chosen in order to assist ISG in ensuring that materials needed by the follow-on trades could be easily transported within the upper floors, while maintaining full stability to the structure during the construction stage.

By avoiding moment frames on the lower levels, column sizes were slightly reduced which kept the steelwork tonnage as small as possible.

In keeping with the street’s former industrial heritage, the completed structure will be brick clad to match the nearby surviving warehouses. The project is due to complete in summer 2020. 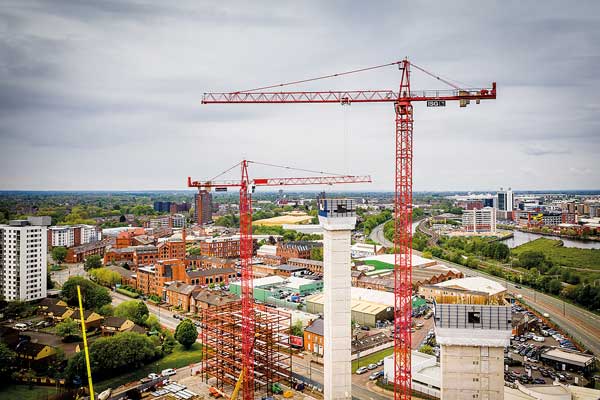 ISG is also constructing another residential scheme for Brickland in the Cornbrook area of Manchester.

It comprises one and two-bedroom units, as well as duplex and townhouse apartments.

Steelwork contractor Walter Watson is fabricating, supplying and erecting 1,700t of steelwork for this project.