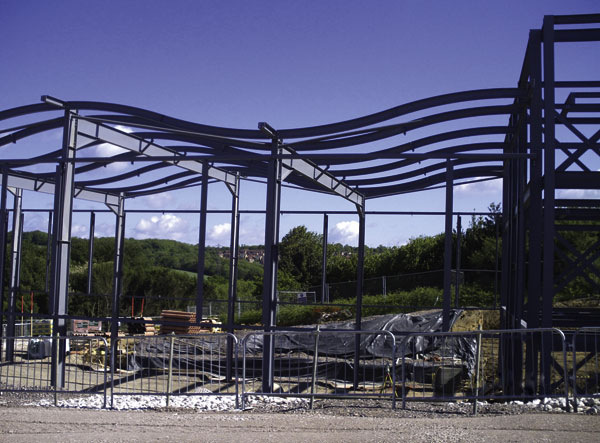 A business park for companies at the cutting edge of environmental technology, as well as those with an interest in conservation and energy efficiency is nearing completion in St Leonards-on-Sea, East Sussex.

Developer Seaspace said it is working to create a high quality technology and business park that will be sustainable in the way it is created and in the way it functions for occupants.

Known as Enviro21, the business park will have energy, water and waste conservation strategies at its core and consists of four steel framed buildings.

One of the structures is called an Innovation Centre and includes offices, meeting rooms, conference facilities and a restaurant with a viewing terrace. This two-storey building will be topped with a brown shingle roof, part of which has been incorporated into an adjacent hillside.

The other three two-storey buildings, known as blocks A,B and C, will each offer 10,000m² of office and workshop space and will be topped with wave-like sloping roofs.

Working on behalf of main contractor VolkerFitzpatrick, ACL Structures has a design and build contract for the project’s 325t of steelwork.

ACL’s Contracts Manager David Kenyon said the most challenging aspect has been the design of the wave-like roofs on blocks A, B and C. “We formed the waves with a series of curves.”

Planning permission has also been granted for a 121m high wind turbine and viewing tower.