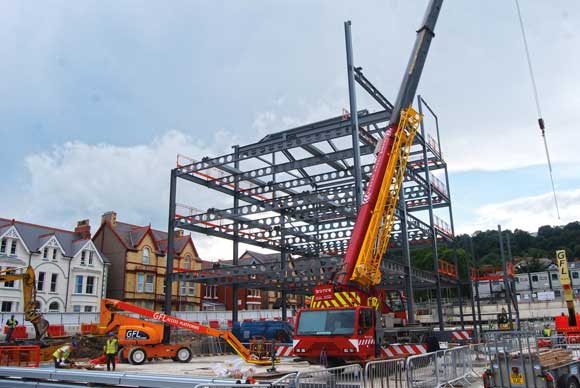 The project is providing a boost to the local construction sector

A steel-framed solution, offering a cost-efficient and quick construction programme, was the answer for a new council HQ and car park in Colwyn Bay. Martin Cooper reports from North Wales.

Providing 9,200m² of office space, it will accommodate around 750 staff and replace up to 13 existing offices. The scheme also includes an adjacent three-level, 354-space car park, which is also a steel-framed structure.

Overall, the scheme will contribute to the Council’s continued regeneration of Colwyn Bay, having already invested over £50M in recent years for the modernisation of the promenade, as well as extensive coastal defences.

Regeneration specialist Muse gained planning approval for the project in August 2016. The company was selected as the Council’s preferred development partner in September 2015 following a competitive procurement process.

Main contractor Bowmer & Kirkland’s early involvement in the project began with a look at the design’s framing solutions.

Visualisation of the completed offices 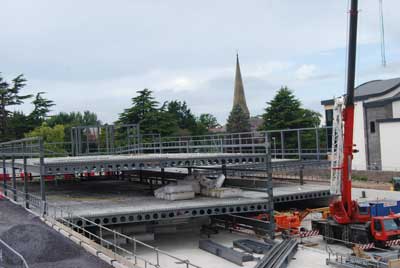 Cellular beams offered the most efficient solution for the car park

“Originally the frame was concrete for the car park and office cores, however through value engineering and a desire for cost savings the scheme switched to a full steel frame during the final design stage,” says says Bowmer & Kirkland Project Manager Mark Hooson.

“The large spans in the office and car park lend themselves to a steel solution. The use of cellular beams ensures sufficient space to distribute services within the ceiling voids,” adds AHR Associate Director Geoff Goodman.

“Steel is also the most efficient and lightweight structural solution to realise the building’s very distinct roof form and glazed atrium roof, and steel also brings the benefit of programme savings through its speed of construction.”

With the new design in place, Bowmer & Kirkland started on-site during November 2016. It initially demolished the existing buildings, clearing the site and then completed the groundworks in preparation for the steelwork erection, which began in June this year.

“Prior to the steel erection starting we also installed the piled foundations and laid the concrete slab throughout the site,” explains Mr Hooson.

“The slab provides a clean and safe surface for the steel erectors’ cranes and MEWPs to work on.”

EvadX is erecting the project’s steelwork simultaneously on both the offices and car park with two erection gangs, each with their own 50t-capacity mobile crane.

The steel design of the car park is based around a 7.5m × 16m grid pattern, using Westok cellular beams supporting precast planks.

The car park has three floors, including an open rooftop level. In order to accommodate the footprint’s slope, the middle floor has a split level.

“Planning dictated that the car park structure’s height had to be kept to a certain height and so all of the beams are a maximum 575mm deep,” explains Blue Print Engineers’ [the company detailing the steelwork for EvadX] Paul Dean.

“This size of beam is sufficient to create the required headroom clearance, form the long 16m span, support the planks and 75mm floor topping, and create a light airy environment because of the cellular holes that allow light into the inner parts of the building.”

Although the adjacent steel-framed office block is linked to the car park at ground floor, both buildings are structurally independent.

Kloeckner’s Design Team Manager John Callanan said: “We were delighted to work with EvadX to realise the economic clear spans required for the project. Considering the strict beam depth limits throughout the structures, pre-cambered cellular Westok beams ticked all the boxes.”

The office building is designed around a regular 7.5m × 15m grid pattern, which repeats throughout the building’s four floors, giving the offices the desired open-plan environment. Cellular beams have been used to support metal decking in a composite design, as well as to accommodate all of the services within the structural void.

Positioned in the middle of the building is an atrium, creating a full-height void that is topped with a glazed roof. Allowing natural light to penetrate the inner areas of the building, the atrium also accommodates stairs and a lift core.

Supporting the atrium’s glazing is a series of 10 × 15m-long tubular bowstring trusses that span the void at roof level.
The main elevations of the office structures feature steep pitched roofs, mimicking and in keeping with the town’s 19th Century buildings.

The pitched roofs are formed with propped rafters from the flat low level roof on the inner portions of the building. The outer sides are supported with perimeter columns along the outer elevations. These outer columns are either full-height or start at third floor level.

In total, there are 12 pitched roofs, one atrium roof and also a high level flat roof above the main lift and stair core area.
Summing up, Muse Development Director Phil Marsden says:

‘This is a very important project for Colwyn Bay and the ongoing regeneration of the town. We’re working closely with Conwy Council to develop the scheme which will help them to operate more efficiently and reduce their carbon footprint by bringing a number of key services together into one energy-efficient and accessible building.”

Cllr Dilwyn Roberts, Leader of Conwy County Borough Council, adds: “This new office building will not only help to streamline our office accommodation, but it’s also a key part of our regeneration programme.”