Posted on October 12, 2017 by NSC in Commendation, SSDA Awards, This month's featured stories 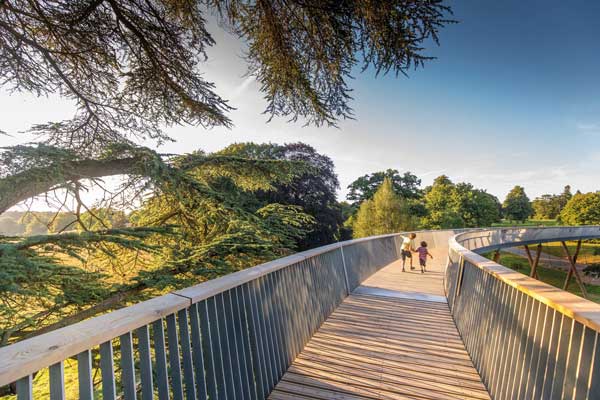 At 300m-long the walkway is the longest structure of its kind in the UK; set in the beautiful Grade 1 historic Victorian landscape, it provides visitors with a chance to walk through the tree canopy providing a new perspective and stunning views.

The walkway project has a history that goes back nine years when a concept design first came to light following a design competition. However, it was put on hold while the arboretum focused on fundraising and completing Phase One, a new Welcome Building and car park.

After a three-year fundraising campaign by the arboretum’s partner charity Friends of Westonbirt Arboretum and a refined design in place, the project was able to start on-site.

“We made a few tweaks to the design, such as changing the walkway support spine from timber to steel,” says BuroHappold Project Engineer Joe Darcy.

“Steel was chosen as it is more durable and will give the walkway a longer lifespan, while we also needed a material to give us a stiffer deck to provide lateral stability,” adds Westonbirt Arboretum Project Manager Sophie Nash.

“We have used two primary materials to construct the walkway, steel and timber. Steel has been used to support the deck of the walkway, which enabled us to slim down its profile, reducing the visual impact on the landscape. Using steel also allowed us to create gentle, sweeping curves.” 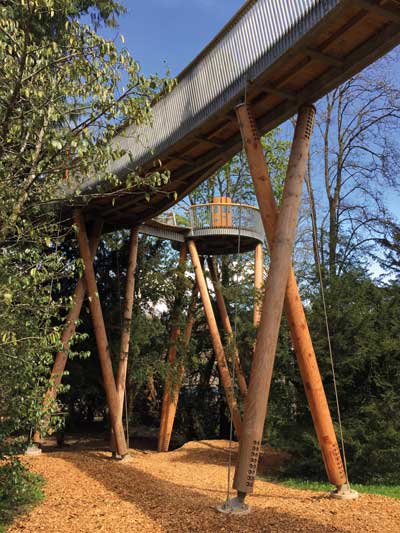 The basic structure is a simple arrangement of two perimeter beams supporting the 1.8m wide deck and the balustrades. These beams are formed from curved galvanized steel RHS sections which, with the CHS cross beam, create a laterally stiff structure to transfer loads back to the supports.

A galvanized finish was chosen for all the steel components to achieve the required design life with limited need for ongoing maintenance. Sustainability was also an aspect of the design when it came to the construction. Building the walkway using small assemblies and single elements enabled the size of the construction equipment to be reduced, and the use of bolted connections throughout means that future dismantling will be straightforward.

Various support solutions were considered due to the unique constraints of the site. The chosen route of the walkway had to have the minimum impact on the root profile of the surrounding trees and there could also be no direct fixing to any of the trees.

The solution was to use shallow reinforced concrete pads supporting pairs of inclined timber legs at 10.5m centres. The inclined columns provided a more natural feel and allowed the base positions to be easily moved in plan to avoid areas of heavy root coverage.

At four points along the route the walkway widens providing spaces for pausing and interpretation of the surrounding woodland and interesting facts about trees and timber.

The judges say, owing much to the romantic tradition of great English landscapes this sinuous walkway carefully winds through the canopy of ancient working woodland, whilst avoiding the precious root zones.  A ‘tuneable’ structural system addresses the varying dynamics and geometrical restraints.

The curvilinear route, which heightens the sense of drama and discovery, was facilitated by the use of steel.  Apparent simplicity conceals sophistication in this project.