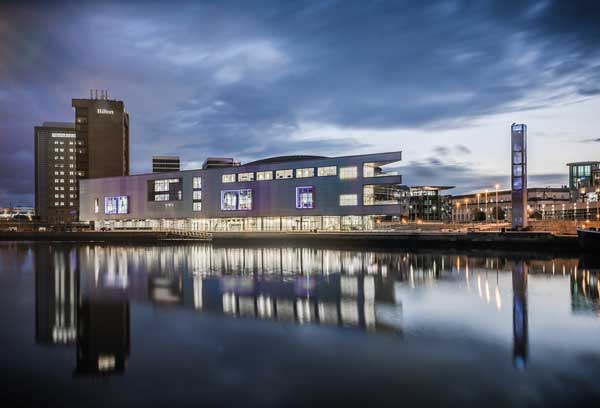 The new steel-framed extension to the Belfast Waterfront provides an additional 7,000m² of floor space, which can facilitate up to 5,000 guests.

FACT FILE
Architect: Todd Architects
Structural engineer: Doran Consulting Ltd
Steelwork contractor: Walter Watson Ltd
Main contractor: McLaughlin & Harvey Ltd
Client: Belfast City CouncilFlexibility is at the heart of the design for Belfast Waterfront extension as it includes a 1,800m² main hall, together with a 700m² minor hall, both of which can be sub-divided to allow more flexible layouts

These large clear span spaces were most cost-effectively achieved through the use of a steel frame, particularly given the site constraints.

The conference halls and breakout rooms are also flexible spaces allowing the client to offer tailored events and compete with other UK cities for major conferences and exhibitions. The new banqueting facilities can accommodate 1,000 people making the venue one of the biggest in Northern Ireland.

The use of steel meant the construction works could be accelerated given the opportunity to pre-fabricate the frame offsite in advance.

The project’s primary structure was influenced by several factors. Firstly, the spatial requirements for the extension involved column-free spaces, a combination of single/double-height spaces and partial intermediate floors, and the need to build over and around retained structure. 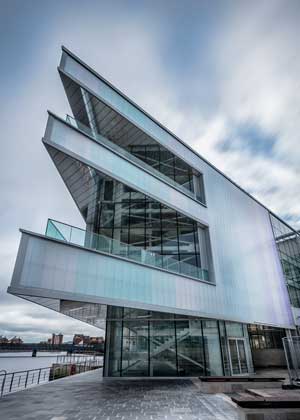 Secondly, the whole extension was to wrap around and tie into the existing Waterfront at various points and levels.

Lastly, there were complex load paths involved in the structure, with offset columns and transfer beams. This led to a number of framing solutions being employed, using 1,400t of steel.

The main hall and the plant on the roof are directly above these intermediate floors. Cellular beams were used to form the hall roof, as this allowed services to pass through the beams and so maximise ceiling heights.

The cellular beams had a tapered section to provide integral roof falls, as well as a level soffit for rigging steelwork.

These dual function beams saved structural depth and reduced the dead load of the roof structure, while also supporting the heavy loads imposed by the large plant equipment on the roof.

In addition, in some areas the lower floors and façade elements were hung from the hall ceiling cantilever beams through tension in the façade columns. These cantilevered beams extended out by approximately 3m over the public space along the river side of the building, allowing the main hall floor space to be increased. This tension design could only have been achieved in steel construction.

Summing up, the judges say new conference halls, banqueting and break-out spaces extend the Belfast Waterfront Conference Centre right up to the quay of the River Lagan. The resulting multiple challenges, both physical and financial, were met by a sequence of appropriate and pragmatic structural steel and architectural solutions.

All images on this page © GOC Photography