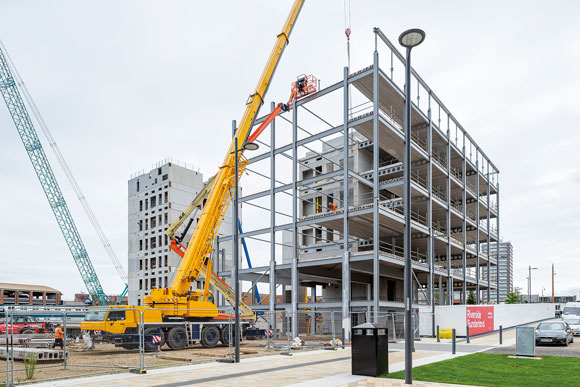 Sunderland’s new City Hall is the latest project on a large regeneration scheme, which is transforming a former brewery site into a mixed-use neighbourhood.

A new £42M City Hall scheme for Sunderland City Council represents phase two of the Vaux Brewery masterplan to regenerate this prominent site to the north west of the city centre, creating a vibrant mixed-use neighbourhood.

The steel-framed project will provide a mix of private and public uses, while consolidating a wide range of municipal services previously located across eight locations around the city, bringing them together under one roof. In addition to municipal customer services, the building will comprise a fitness room and an employment centre.

The project consists of two office blocks, one five-storeys high and the other six-storeys. Each of the office blocks is arranged around a centrally-positioned precast concrete core, from which Westok cellular beams, up to 12m in length, radiate outwards to the perimeter columns.

The long cellular beams create the desired column-free internal spaces and allow the scheme to have a minimal number of columns inside the building’s perimeter. 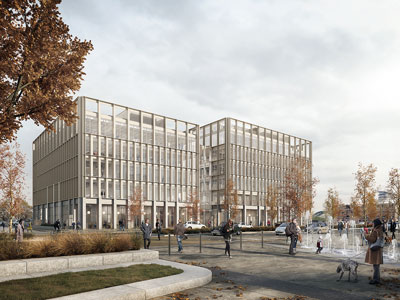 The twin blocks are five storeys and six storeys high 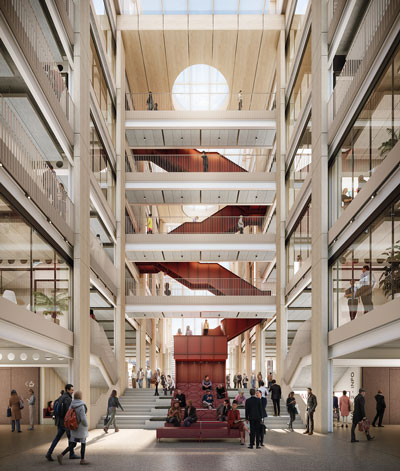 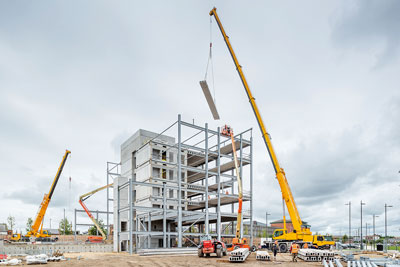 Precast flooring units are installed along with the main steel frame.

As well as creating the long spans, the beams also support the structure’s precast flooring planks, while also accommodating the building’s services within their depth.

The only part of the scheme with spans over 12m-long is one area on the ground floor of the five-storey block, where a 15m-span council chamber/multi-use room needed a little more column-free space.

In order to gain some more floor area, the building’s core only reaches it maximum width at first floor level, with a smaller core serving the lower level. Freeing up some valuable ground floor space, the core is supported at first floor by a series of large beams that act as transfer structures.

“The beams are the heaviest steel elements on the job and they have been installed in pairs. However, they were erected individually and then tied together using a bespoke designed end-connection detail,” says Hambleton Steel Contract Manager Doug Willis.

Both of the block’s ground floors are double-height spaces, containing some mezzanine levels that provide some extra floor space for meeting areas. The columns supporting the mezzanines are the only internal columns on the project.

The ability to create the desired long spans and its speed of construction were the reasons for choosing a steel-framed design with precast flooring, says FaulknerBrowns Architects Senior Associate Peter Hunt.

“This solution also allowed us to leave much of the steelwork and precast elements, along with the building’s services fully exposed, as a nod to Sunderland’s industrial and shipbuilding heritage.”

The two office blocks obtain their structural stability from their concrete cores, but they are also linked together by a central full-height covered atrium.

According to Mr Hunt, the atrium acts as a public thoroughfare to make the available services visible, legible and accessible. An activity-based work environment unfolds along this central internal lightwell, delivering an engaging, flexible workspace with an emphasis on natural daylight and wellbeing throughout the building.

A number of link bridges span the 10m-wide atrium at first, second, third, fourth and fifth floor levels, providing easy connectivity between the two separate blocks. Even more access between floors is afforded by a feature steel staircase that sits in the middle of the atrium.

Externally, the building is said to respond to its position adjacent to the recently upgraded Keel Square, an important new public space within the city and an integral part of the masterplan development.

The building is grounded on a well-defined base with an emphasis on engaging the street with an appropriate civic expression. The steel columns and beams framing the two buildings will be clad in reconstituted stone with a tone and finish that responds to the materiality of the grade II listed baroque style Magistrates Court, which also sits on the square.

The steel columns start at ground floor and are founded on mass-filled concrete foundations. According to main contractor Bowmer + Kirkland (B+K), the ground conditions are not suitable for piling and the chosen method was the best solution for the site.

B+K Senior Project Manager Paul Anderson says: “We started on site in November 2019, and our first task was an earthmoving exercise, which enabled us to install the foundations.

“Once completed and after we had infilled the ground, Hambleton were able to start the steelwork erection programme in June.”

As well as fabricating, supplying and erecting the project’s steelwork, Hambleton is also installing the precast planks and precast stairs as part of its programme.

As planks are up to 12m in length and weigh between 2t and 3t each. Because of their length, they are installed along with each individual floor of steelwork, as manoeuvring the floor units into a completed frame would be extremely difficult.

For the buildings external finishes, a series of large glazed openings are said to promote transparency and create an active ground floor with a strong visual relationship to the public realm.

Similar to the building’s internal areas, the envelope is also said to take inspiration from the advanced engineering and material craftsmanship synonymous with the city’s industrial and maritime heritage. The middle and top sections of the façade incorporate lightweight aluminium profiles set within floor-to-floor glazing, arranged to provide a structured and subtly varied articulation to the envelope, orientated to passively control solar heat gain.

Sunderland City Hall is due to be complete by September 2021.