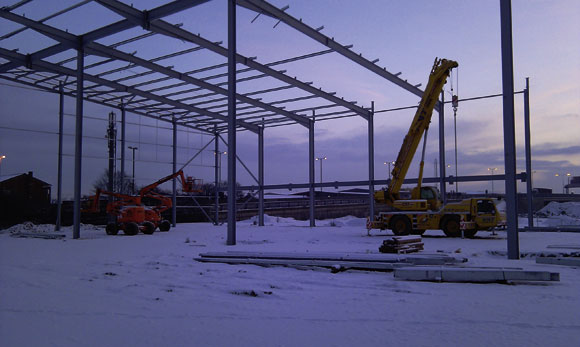 Despite severe weather conditions steelwork was completed on time

Needing a steel frame capable of supporting different loadings, a distribution centre in Enfield also required a frame which could be designed and erected in quick time. NSC reports.

Speed is of the essence for all construction projects, big and small. Time equates to money for clients and contractors alike and all jobs are required to be completed as quickly as possible. In order to satisfy these common contractual demands, much thought is always given over to what materials are used and what materials can best deliver the project on time, or even better – deliver the project early.

A new Tesco distribution centre in Enfield perfectly sums up these criteria as 500t of structural steelwork was successfully erected in just five weeks, ensuring that all of the follow-on trades were able to start on schedule, and that the entire job is on course for its handover in August.

Spanning a warehouse that measures 172m x 82m, the steel portal frame for this project needed to be a bespoke design, as various loadings will be exerted on the steelwork at numerous points because of the internal equipment which will be installed. 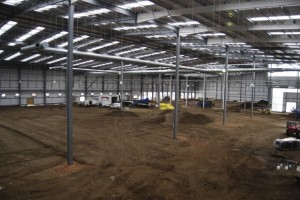 Many of the portal frames will support internal plant equipment

“These large distribution warehouses are usually built with a steel frame in this country,” says Matt Ghinn VolkerFitzpatrick Project Manager. “On this job it had to be steel as no other framing material could have been completed in such a tight timescale.

“The frame will be supporting overhead chillers as well as refrigeration equipment and its pipework. This required a design where many of the portal frames are different, something which can be done with steel.”

Steelwork contractor Hambleton Steel began its programme prior to the Christmas break and completed in February. As well as having to go off site during the festive break, the company also had to contend with some very inclement weather during December, which makes its speedy completion all the more impressive.

Overall, construction work began a few weeks earlier in November when VolkerFitzpatrick carried out a vibro-piling programe, which then allowed the main structure to be erected. The site, which is adjacent to the M25, had been cleared of its original buildings a few years ago and had stood idle ever since.

Covering an area of nearly 14,000m², the rectangular shaped distribution warehouse is a portal frame structure with three main spans of 27.6m, reaching a maximum height of 10.5m. Along the two main elevations of the building there are 23 bays with most columns spaced at 7.5m intervals.

Two of Tesco’s businesses will make use of the warehouse; Tesco.com and Tesco Express. Approximately two-thirds of the building will be used by Tesco.com, with an internal firewall dividing up the structure.

Each portal span was brought to site in two pieces, which were then assembled on the ground into 27.6m lengths and lifted into place as one section. Starting at the northern end of the warehouse and erecting the lines of columns and overhead rafters in sequence to form the portal frames, this allowed the cladding programme to follow on right behind the steelwork erection.

Hambleton’s erectors were able to get off to a good start and handed over four bays of the structure to the cladders at the end of the first week. Sequencing of the construction programme did not end here, as the steelwork erectors were always following on behind the ground works team. 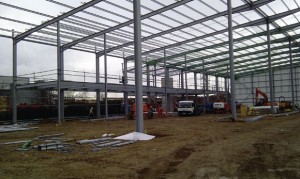 “There are ten different frame designs to accommodate the various loadings in this warehouse,” explains Hambleton Steel Technical Manager Chris Burns. “We have a blanket loading of 0.35kN/m² for the majority of the building, but this increases to a maximum of 0.65kN/m².

“The northern end of the building has some of the heaviest loadings because these frames will support chillers, while most of the area occupied by Tesco Express also features increased loadings.”

Designing each portal individually may have been slightly more time-consuming for Hambleton’s design team, but it has the benefit of making the overall steel design more economic.

“By designing each portal frame separately we were able to reduce larger rafter sizes where we could,” adds Mr Burns.

The Tesco.com sector of the warehouse incorporates a mezzanine level for office space and a ground level staff canteen. Hambleton installed the mezzanine with its main steelwork package along with the associated metal decking and precast stairs.

The entire warehouse is not regimentally rectangular as within the part of the structure to be occupied by Tesco Express there is a vehicular driveway and entrance, which takes up one corner of the building. To allow for this the warehouse is slightly narrower at this end with just two spans – 26m and 27.6m.

Another feature of the project to incorporate extra loadings for supporting plant equipment is a service canopy which stretches along one of the main elevations. The canopy is 9.5m wide and attached to the main frame steelwork. It is formed with a combination of 533 and 610 beams, acting as main rafters and transfer beams.

“We had to design a slightly different column spacing for the canopy as there was an architectural restriction on some column spacings,” explains Mr Burns. “Consequently the canopy steelwork is based around a larger 12.5m spacing.”

The Enfield Tesco distribution centre is on course for its completion in August, a date that includes fit-out. Steelwork has played a significant role in the project’s progress, not only as the frame was erected in five weeks, but the lead-in period for its design was finished in just six weeks. 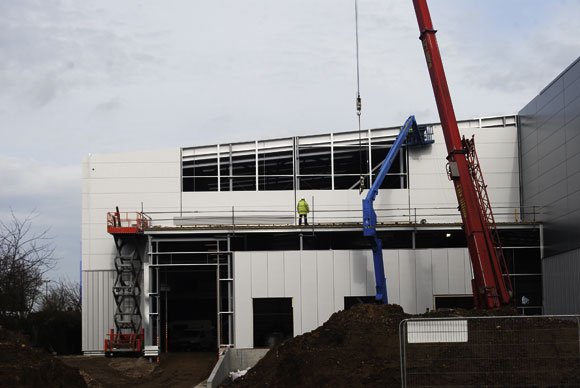 Cladding followed on immediately behind the steel erection