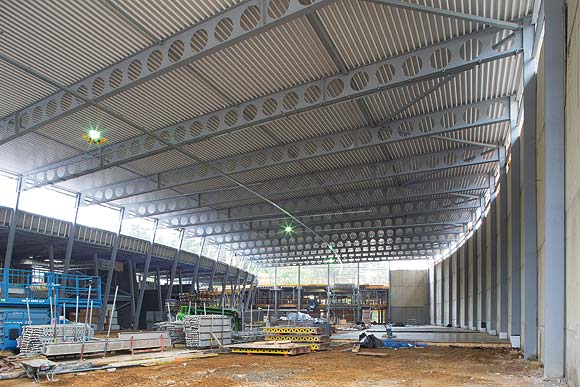 The sports hall has a curved elevation adjoining the hotel

The requirement for lightweight flexible structures has resulted in steel being used on all leisure facility buildings at the latest Center Parcs development.

Center Parcs is constructing its fifth UK village at Woburn Forest near Milton Keynes, a project that is being aided by steel construction for its leisure facility buildings.

The £250M development is one of the largest leisure projects in the UK and will eventually create 1,500 jobs. During the construction process it is providing employment for 1,200 workers.

Overall the job has been divided into three main contracts, with infrastructure and civils being undertaken by Birse, the construction of 625 accommodation lodges by ISG while Bowmer & Kirkland is responsible for the £93M contract to deliver leisure buildings.

The leisure facilities consist of three parts and steel tonnage wise The Plaza (next to the watersports lake) is the largest component of the contract requiring approximately 1,000t of the material. Hambleton Steel is the steelwork contractor working on behalf of Bowmer & Kirkland for this part of the project. 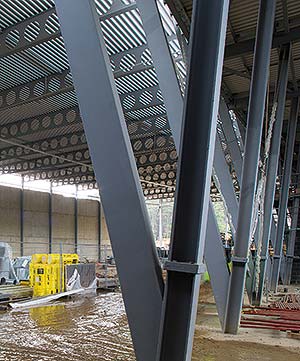 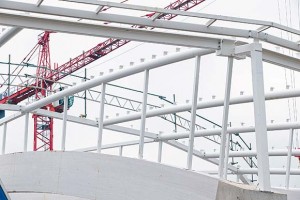 A steel roof floats above the dome’s main rafters 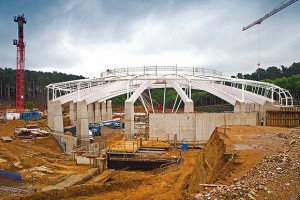 A large sports hall is one of the most prominent parts of this area, with a series of 32m-long Westok beams forming this column free space. Weighing 6.5t each, these beams were brought to site in two pieces bolted up on the ground and then lifted into place as one section.

Another feature of the sports hall is the curved shape of the structure as it follows a radial grid. Each column is set out individually as the connecting 14m-high beams are faceted to form the curving elevations.

The inside elevation is formed by a series of V-shaped columns, an architectural steel feature which will remain exposed within the completed building. These columns were fabricated by Hambleton Steel in two pieces; one with a V-shaped base and the other a straight column that was connected via a bolted connection to form the final double column element.

Behind these feature columns the sports hall includes a two-storey zone housing a ground floor crèche and offices on the upper floor.

“The steel braced sports centre was first to be erected in this area,” explains Bill Poole, Bowmer & Kirkland Project Manager. “Everything else, including the hotel, followed on afterwards.”

One end of the sports hall connects into a large two-level venue area which is being constructed with an in-situ concrete podium and a steel framed upper level.

The podium will house a supermarket and some smaller retail units, while the above steel framed level will accommodate a conference centre.

A few hundred metres away along a woodland road is the Village Square development that is divided into two sectors, north and south. The former is a two-storey retail, restaurant and bowling complex, while the latter is a large domed swimming pool structure known as the Subtropical Swimming Paradise.

Steel is playing an integral role in the construction of both of these two adjacent structures. Steelwork for the Village Square north side is being fabricated, supplied and erected by Shipley Fabrications with 170t required for this part of the project.

The upper level of the Centre One North is steel framed and it is mostly founded on top of a concrete podium level. As the building incorporates the site’s sloping topography, approximately one third of the structure only has the steel framed level.

The single storey element of the building will house a diner, while the two-storey part will accommodate retail outlets within the podium and a bar and a bowling alley on the upper level.

Coordination was key to the construction of this structure as Glynn Shepperson, Shipley Fabrications Director says: “While we erected the diner, the podium was being poured simultaneously. We then continued erecting the steel frame for the upper level by following on behind the concreting team.”

The steel frame is on a 7.8m × 7.8m grid, matching that of the concrete frame, within the podium. The only exception is the bowling alley where a series of 20m long 3t cellular beams create the necessary larger column free grid.

“The cellular beams have all been fabricated with tapered end sections to suit the varying roof/ceiling profiles,” says Mr Shepperson.

Meanwhile, the Village Square south side is destined to become one of the Village’s focal points. The large steel and timber clam-shaped dome Subtropical Swimming Paradise will house six pools of varying sizes.

Similar in design to the Village Square north side, the facility has a podium housing the pool’s changing facilities, with a steel framed upper level with restaurants.

The swimming pool’s large dome has been created by a series of 70m long glulam rafters, while spanning around and in between the timber is a steel hollow section ring beam and roof.

“The steel is supported vertically by the glulam beams and has been designed to look like it is floating,” says Mr Kelly.

The centre point of the circular roof structure, where the beams meet is supported by a series of feature 16m long pencil shaped tubular columns.

The majority of the roof will be clad with Kalzip and ETFE for the roof, however the front elevation – overlooking a lake – will be fully glazed to a height of 16m.

This large feature façade is formed by a series of 12 steel bowstring trusses.

Excluding the changing room facility, the roof structure has been designed and constructed by B&K Structures (a wholly owned subsidiary of the Bowmer & Kirkland Group).

Summing up, David Gallimore, Holder Mathias Project Architect, says the reasons for choosing a hybrid design for the leisure buildings is because Center Parcs has a similar design philosophy for all of its developments.

“However, steel has been used in areas where a lightweight and flexible solution was required.”

Center Parcs Woburn Forest is scheduled to open in spring 2014. 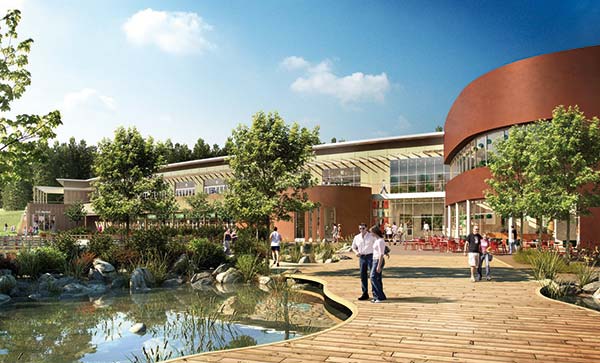 Close by is the Village Square north side, a two-storey retail, dining and bowling alley complex.

The Plaza is a stand-alone collection of facilities which includes a large indoor sports hall, conference facilities, a supermarket and a 75-bed hotel.

Under a separate contract ISG is building 625 lodges for the project, while the overall civils contract will see Birse create seven miles of new roads for the new Center Parcs.

Tailored Solution for roofs and envelopes

Tata Steel’s Kalzip is said to be the world’s leading aluminium standing seam roofing and wall cladding system. It is a precision engineered, multi component system with proven durability, high performance and low maintenance.
A range of materials, finishes and shapes are available offering a multitude of designs. The product is also said to combine functionality with stunning aesthetics on both small uncomplicated designs as well as world famous, award winning projects.