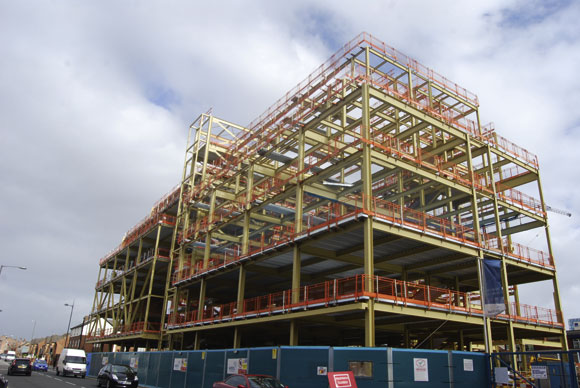 Work is currently progressing apace on a new building for Liverpool’s John Moores University. Situated on the Mount Pleasant Campus, and overlooked by the Liverpool Metropolitan Cathedral, the six-storey steel framed structure incorporates three large lecture theatres and will ultimately serve the faculties of business and law, media arts and social science.

As with many inner city construction projects, this job has had to contend with a number of logistical issues, due to the site’s extremely tight footprint and the proximity of busy roads. “We’ve also had to deal with some very strong winds over the winter,” says Wates Construction Project Manager Tony Foster. “However, our team is working proactively to overcome all of these challenges to deliver an exceptional facility for the University.”

Materials to site, including the steelwork, have all been delivered on a ‘just-in-time’ basis, due to site constraints. Little or no storage space is available on this project, and apart from the area where the project team has its cabins, the new structure occupies nearly all of the footprint.

“We’ve actually borrowed a small piece of land from the adjacent school. Here we can store some materials and position a crane when necessary,” adds Mr Foster. This gesture from the school will be reciprocated once the project is completed. Pupils at the school are holding a landscape design competition.The winning entry will be given to Wates and it will then landscape the plot to the design before handing it back to the school. 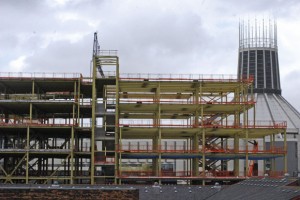 Helping with the regeneration of adjoining plots of land is just one facet of this project, another is the previously alluded to close proximity of thoroughfares and pedestrians. For this reason the site has made sole use of mobile cranes for all on-site lifting duties.

“With a tower crane we’d be over slewing the adjacent roads which could be dangerous; with mobile cranes we can adjust the machine’s position and negate this hazard,” adds Mr Foster.

This logistical decision has meant all steelwork for this project has been erected by a combination of mobile crane and cherrypickers.

Work started on site last year with Wates first undertaking the demolition of an old five-storey university block. The new block covers the same footprint, but is one level taller and also features a three level basement area. This underground level required a large scale excavation programme before the installation of concrete retaining walls and rock anchors to form the subterranean floor.

The basement does not have a uniform slab as it actually incorporates three different levels, two of which are occupied by a large lecture theatre.

One of the main reasons for choosing a steel frame for this project is the number of transfer structures needed to form the large open spaces for the three lecture theatres. As well as the basement theatre, there is another one at ground level and a further theatre at level three.

Architecturally, the structure also features two cantilevering façades, which would have also been difficult to form in anything other than steel,” adds Curtins Project Engineer Andy McFarlane. 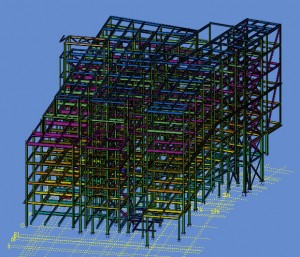 A model of the frame

To stabilise the structure there are four steel braced cores, housing lifts and staircases, located throughout the building and sway frames along all elevations. Structurally the building is split into two sections, divided by a large glazed atrium. Both sections are structurally independent and linked by a series of steel footbridges which span the atrium.

Because of the tight footprint steelwork contractor Billington Structures had to erect the project sequentially starting at the northern end of the site. Initially a portion of the structure, equating to approximately one-third of the total footprint, was erected up to the topmost sixth level and fully decked.

“Some of the lower steelwork had to be temporarily propped for stability,” says Paul Hayes, Billington Structures’ Contract Manager. “Once steelwork was erected above third level its own bracing provided the stability and the props were removed.”

Billington then erected the rest of the main frame in two more phases, which also incorporated the atrium and the column free theatre spaces. The largest of the building’s theatres is located on the third floor. To create this space one large 25m-long truss supports the fourth floor level above. The truss was not installed as one piece because it would have been too big to manoeuvre around the site. Instead the entire bottom boom was erected as one, and then all other members were individually bolted into place.

During the second phase of the steel erection programme, Billington started constructing the cantilevers which are located along one main elevation and separated by the atrium. Starting at first floor level, the cantilevers are 6m and 5.8m wide respectively, and extend up to level four and level five.

“We erected the cantilevers separately as the structure was by then sufficiently braced that no propping was needed,” explains Mr Hayes. Bearing in mind the busy thoroughfare that lies adjacent to and beneath the cantilevers, propping would have caused a hindrance to the pedestrians.

The campus building is due to be operational for the autumn term 2012. 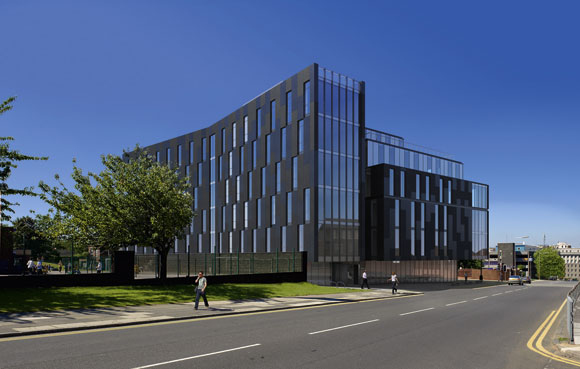