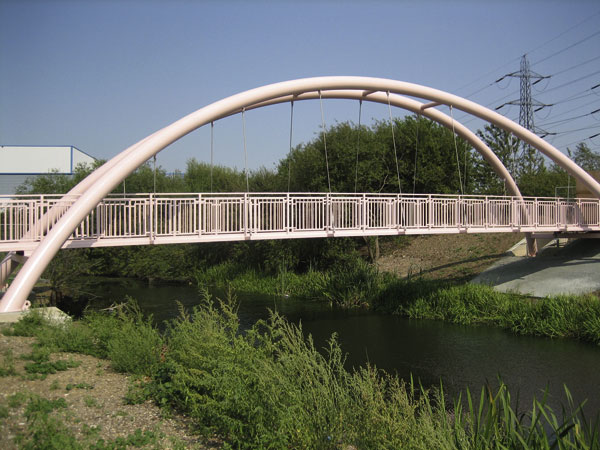 The 24m-long structure was fabricated and erected by Allerton Engineering for the London Development Agency. It will help  development of a nearby industrial area opened for the relocation of small businesses from the 2012 Olympic Games site.

Allerton Engineering Director, John Riddle, said: “The span was fabricated as one piece, but the arch is formed by two separate sections and these were both delivered to site in 11m-long lengths – four in total.”

The entire erection of the bridge took three days and involved Allerton first lifting the main span into place with the aid of some temporary trestles.

“The trestles acted as mock foundations while we erected the arch sections, which have a maximum height of 6m,” explained Mr Riddle.

The span is supported by a series of stainless steel Macalloy hangers, while the arch has five cross members connecting its two parts. The two arches also lean towards each other by 15-degrees.

Commenting on the bridge’s vivid colouring, Mr Riddle said the client specified the hue in order to contrast with the surrounding buildings, which are predominantly grey.