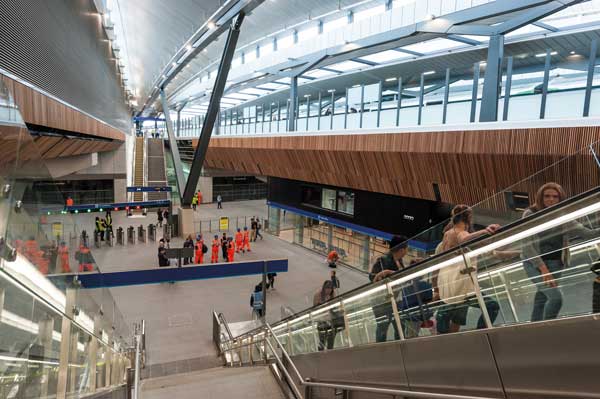 London Bridge Station has undergone a stunning transformation that has delivered a better connection between London’s home counties and an increase in passenger capacity by two-thirds.

The redevelopment programme started in 2012 and was scheduled to ensure the station remained open for business at all times. On 2nd January 2018, the final section of the massive new concourse along with five new platforms opened to the public, with the remaining redevelopment works finishing in the spring.

All of the station’s 15 platforms have been rebuilt and are now covered by an undulating canopy of steel and aluminium, fabricated and installed by Severfield.

The eye-catching canopy roof is modularised using open sections where each module is approximately 9m deep by 3m wide. There are 1,200 prefabricated steel cassettes, with each one a bespoke unit due to the changing rooftop geometry.

To save time, cassettes were prefabricated offsite and then craned into position, allowing the canopy to be built during short night-time construction hours. 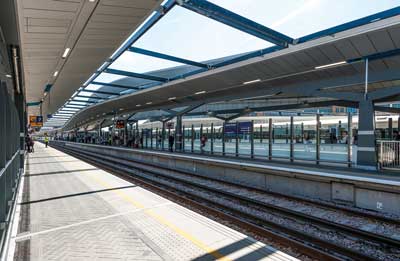 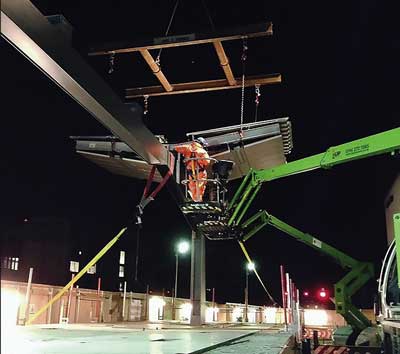 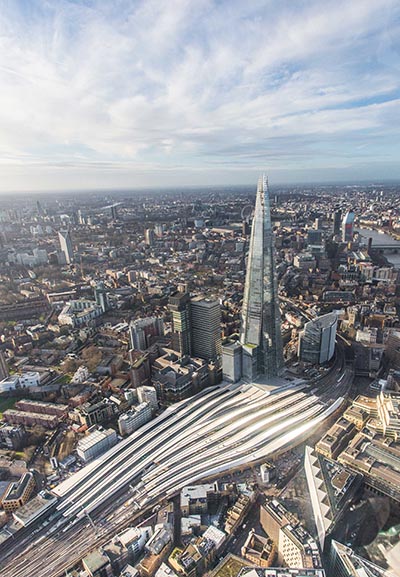 Platforms and canopies sit outboard of the bridge girders, supported on transverse ‘elephant ear’ frames, and as trains pass over the bridges any deflections cause the tips of the ‘elephant ears’ to move longitudinally.

The plates that connect the frames to the bridge girders are designed to balance strength and stiffness, in order to resist the applied loads while remaining flexible enough to avoid fatigue. Toward the ends of the decks, fatigue movements are higher and radial spherical bearings are used.

The centrepiece of London Bridge Station’s redevelopment is the concourse, which is nearly 80m wide. There is also an expansive central space at the heart of the concourse which deals with the level changes across the site. The large span of this space was achieved by using a longitudinal V-column to support a 5m deep Vierendeel truss.

Cleveland Bridge UK Ltd fabricated, supplied and erected the steelwork for the rail bridge decks that span the new concourse.

The concourse bridge decks are made up of three to four spans of simply supported decks for each rail line. Each bridge deck comprises six main girders braced together and tied at the ends with trimmer beams, which were delivered and erected as pairs.

For the installation of the decks and canopy, the project was split into six phases between October 2013 and May 2017. Close co-ordination between Cleveland Bridge and the main contractor Costain was essential to ensure the steelwork could be delivered efficiently to site and erected using either cranes or Self-Propelled Modular Transport (SPMT) systems. Each stage of installation was carefully planned to ensure follow-on trades were not hampered.

The size of the steel structures required large bearings. However, installation of the bridge bearings was complicated by the fact there was minimal space on the pier heads to allow both longitudinal and rotational construction movement needed for installation.

This was resolved by Cleveland Bridge’s suggestion to use a tapered plate between the bearing and bridge steelwork to allow for bearing rotation. This was sufficient to counterbalance the deflection caused by concrete pouring.

Once the concrete was placed, cured and the majority of dead load was applied, Cleveland Bridge jacked up each bearing and replaced the tapered plate with a parallel plate, thereby restoring the rotational capacity of the bearing to take the imposed loads.

The lifting schemes for all steelwork installations were planned by Cleveland Bridge’s in-house project teams, and included the innovative use of heavy capacity scissor lifts mounted on the top of SPMTs to solve access and installation problems.

One of the main aspects of Cleveland Bridge’s work was to maximise the level of offsite fabrication and preparation to significantly reduce the on-site programme.

As the station was operational throughout the project, health and safety was paramount and the overall project was delivered within budget and ahead of schedule, exceeding the client’s expectations.

Summing up, the judges say the project has produced a major upgrade to the existing station, which remained operational throughout. Collaborative offsite manufacture minimised disruption during the project

The use of steel has allowed the design team to create open concourse spaces beneath the tracks and elegant curves to the canopy structures above. The project is a great example of ‘designing for construction’.