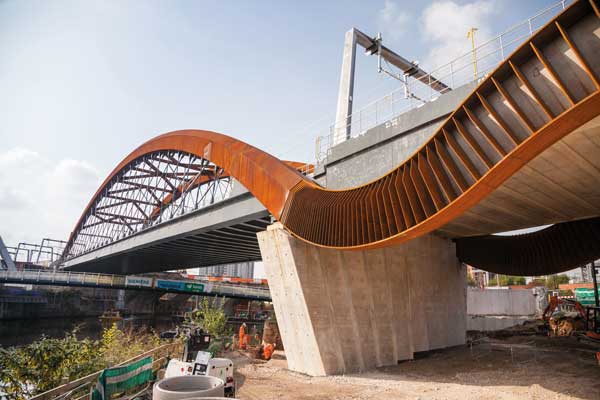 The Ordsall Chord Viaduct includes the first network arch bridge to be built in the UK, and the first asymmetric (tapering) network arch anywhere in the world.

It carries a new two-track railway across both the River Irwell and Trinity Way dual carriageway. It sits next to major heritage structures, part of the historic 1830 Liverpool to Manchester Railway, the world’s first inter-city railway.

The context required a design which was of the highest architectural quality, with a structure which would act as a landmark without dominating surrounding buildings.

Television presenter and former MP Michael Portillo says: “Based on what I’ve seen, the Ordsall Chord will be destined to become a Manchester landmark.”

An 89m span network arch structure was chosen for the main river span, combining great strength and stiffness with a relatively low profile. A 100m long twin girder bridge was selected for the spans over the roadway.

All parts of the viaduct are integrated visually to appear like a single ribbon of weathering steel, tapering at both ends, and sized to suit the specific structural requirements on the individual spans.

“From the early stages of design, weathering steel was considered to be the ideal surface finish for the structures. It provides an honest expression of the material in terms of its function, colour and texture, echoing the historic masonry that sits alongside,” explains BDP Architect Director Peter Jenkins. 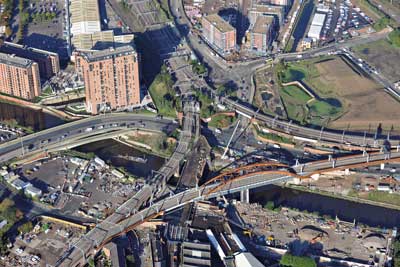 The preliminary design concept illustrated box girder structures throughout the length of the viaduct. The design was modified during the design-and-build phase, adopting box girders for the arch ribs but stiffened plate I-girders for the spans over the highway. This reduced construction cost and simplified future maintenance requirements.

The network arch is visually merged with the girder spans above Trinity Way by the inclusion of steel ‘cascades’ in between. These transition pieces negotiate complex changes in vertical and lateral geometry, and give the impression of a smooth transformation from the hexagonal box to the ribbed I-section.

Steel was the most cost-effective solution to satisfy the client’s structural performance requirements and also the desire for an elegant, iconic structure. Steel was ideal for the offsite manufacture of a highly geometrically complex structure, and allowed an efficient construction methodology to be developed.

The network arch was the biggest structural challenge. An existing road bridge had to be demolished before construction could proceed. Steel support trestles were assembled by driving tubular steel piles through its deck, and they were used to prop the structure during demolition.

The supports served a dual role: they were then reused as the supports for the network arch span during its erection. This smart temporary works design saved approximately £750,000.

The deck girders were installed piecemeal onto the abutments and temporary supports, welded together, and cross-girders bolted in place. The arch sections were brought to site in segments, and welded together lying on their side near the river bank. Both arches were then rotated on end pivots to their correct inclination (6° from vertical), overhead bracing installed and temporary tie cables and struts inserted.

Hanger stressing was the most complex construction stage, with a total of 136 stages of stressing completed. Two independent load monitoring systems were used in every hanger during construction, with one monitoring system left in place for in-service structural health monitoring. Although the structure behaved generally as predicted, close cooperation was required between the construction and design teams to allow small divergences in hanger load to be corrected.

Summing up the use of Building Information Modelling (BIM) on the project, AECOM Mott MacDonald Engineering Manager Brian Duguid says: “This is 21st Century engineering in every sense – for the first time we have swept way the old 2D drawing legacy that dates back centuries.”

The judges say the Ordsall Chord project is a major piece of new railway infrastructure that has a truly civic presence. The project combines a new network arch railway bridge and approach viaducts with integrated public realm. Weathering steel is used as a strong unifying element that flows through from the viaduct and bridge approach upstands into the main arches of the railway bridge, giving the scheme a strong architectural identity within its urban setting.