Posted on July 13, 2015 by NSC in Certificate of Merit, SSDA Awards, This month's featured stories 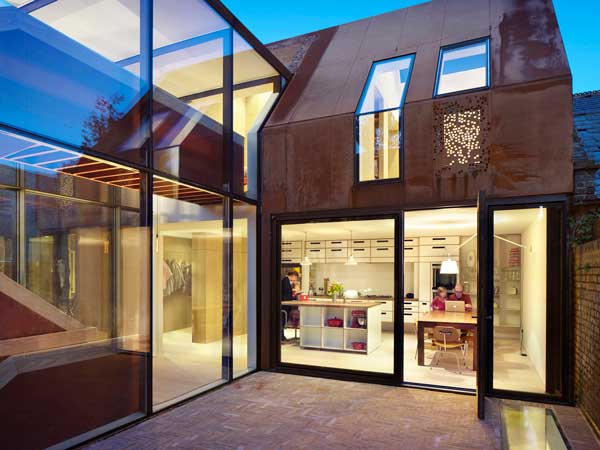 Located in the Kew Green Conservation Area of London, a four bedroom house has been formed with two prefabricated weathering steel volumes behind a retained 19th Century stable wall.

“Being able to construct the building from within the site and without intruding on neighbouring gardens was one of steelwork’s advantages.” says client and Price & Myers Partner Tim Lucas.

“A steel frame spanning over the large basement box also provided support for both sides of the basement walls and for the steel building envelope, with corresponding levels of accuracy and tolerance that allowed complete prefabication of all superstructure elements,” he adds.

A key feature of the building is the weathering steel façades and roof. The house is split into two gabled forms that are joined by a glass link that houses the circulation – steel stairs, a link bridge between the two sides and a plywood slide down into the basement.

“We selected weathering steel for poetic and pragmatic reasons. The changing patina, the texture and hue of its surface and the dappled light through its perforated surface echo the palette and mood of Kew Gardens across the road,” says Piercy&Company Director Stuart Piercy. 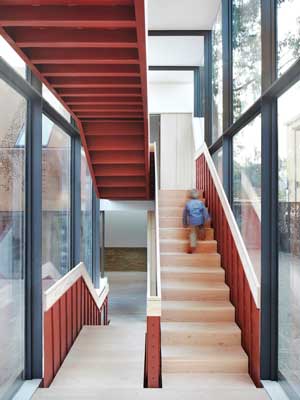 The roofs are made as structural stressed skin shells in 4mm weathering steel, strengthened with internal mild steel stiffeners. The roof shells form the watertight enclosure to the building, like an upturned hull of a boat.

The shells have an intricate array of details, including perforations, expressed welded joints and concealed gutters and drainage channels around window openings that retain their clean lines whilst making the shells functional as a building.

The shells were fabricated in 10 large modules offsite and shot blasted before being brought to site and lifted in using a lorry mounted crane. This approach allowed both the structure and roof finishes to be constructed from within the site boundary. The modules were site welded together to waterproof the joints before being lined with insulation, fitted with windows and drylining to give a total wall thickness of only 200mm.

“In practical terms, steel allowed us to run the offsite manufacture of the steel shells in parallel with the onsite groundworks. Manufactured in Hull and assembled onsite, the two weathering steel shells exemplified an interest in a ‘kit-of-parts’ approach, prefabrication, and the self-build possibilities emerging from digital fabrication,” adds Mr Piercy.

A steel staircase forms a principal feature of the house in the glazed link. It is very slender, with a well thought out arrangement of stiffeners to give it the required strength to span 6.5m between the two sides of the house. After installation it was decided to leave it exposed rather than being covered in timber.

Through its use of weathering steel as the primary structural and visual material, and the ingenious use of the site, this private house can claim to enhance the conservation area, say the judges.