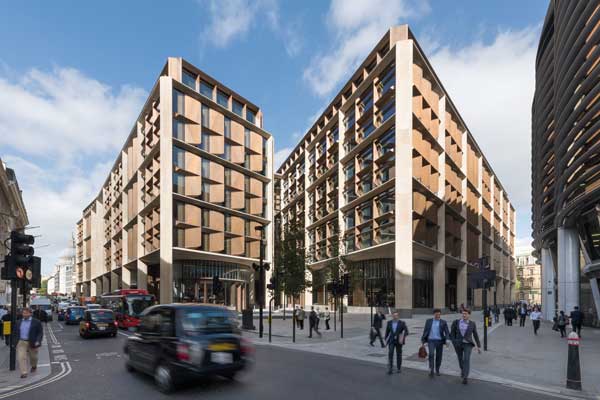 Bloomberg’s new European headquarters achieved a BREEAM ‘Outstanding’ rating, which is the highest design-stage score ever achieved by any major office development in the UK.

Steel frames with composite concrete floors are clad with sandstone and metal fins to produce a solid, understated elegance.

Compared to a typical office building, the new Bloomberg building’s environmental strategies deliver a 73% saving in water consumption and a 35% saving in energy consumption.

Norman Foster, Founder and Executive Chairman of architect Foster + Partners, says: “In some of our first discussions on the project, Mike Bloomberg and I arrived at a ‘meeting of minds’ on how the design of the new Bloomberg headquarters should incorporate the highest standards of sustainability. The project evolved from thereon into a building that is one of the most sustainable in the world.”

There were many challenges to overcome, particularly concerning the site. Constructing close to an existing sewer, the adjacent Waterloo & City line tunnel and the new direct link to Bank Underground station all required third party agreement and considerably affected programming. Foundation designs were complex and bridged over delicate areas where necessary.

The project’s plot was previously occupied by Bucklersbury House, a disused 1950s structure demolished prior to work starting on site. The slab and pile foundations were retained following a radar survey, which confirmed that the vast majority could remain, with additional piles introduced only in the south-west corner of the site. 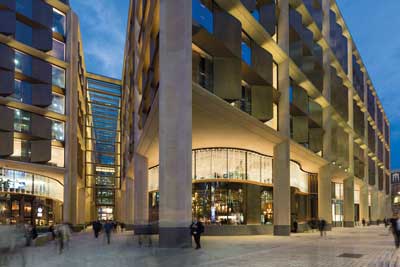 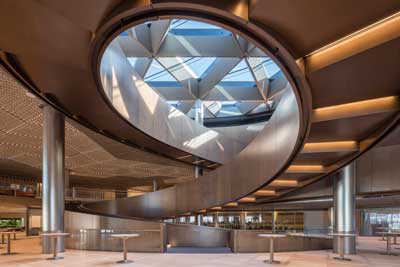 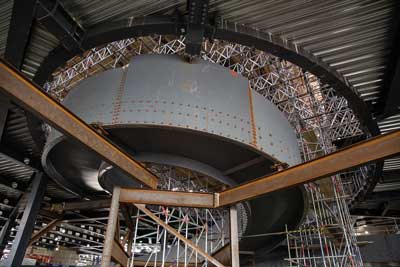 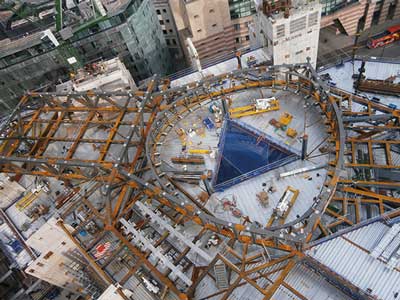 On plan, the form and setting out of the north and south buildings respond to the angular nature of the site and the alignment of the new arcade with Watling Street. To achieve this, both buildings use a unique structural grid set out on a 13.85m equilateral triangle that maximises open floorplates.

All of the cores are formed from insitu reinforced concrete but, in contrast to traditional building forms, they have been pushed to the perimeter to increase the extent of uninterrupted floor space and improve visual connectivity.

The building’s structural grid is interrupted in a number of locations with transfer structures to create unique spaces. The most significant of these occurs above level eight in the south building and involves a storey deep truss within the level nine plant floor spanning up to 26m between columns.

This allows the suspension of level eight and the removal of four main internal columns to create a two-storey high communal space with spectacular views of St Paul’s Cathedral.

The north building has a feature ramp, which provides access between floors from level two to level eight. The steel ramp structure is 1.5m wide and spans 30m between floors. The elliptical oculus within the floorplates through which the ramp passes also rotates 120 degrees at each floor level following the route of the ramp.

The main reception carves a column-free space under the ramp between ground and level two, introducing a three-dimensional structural vortex form that spans, displays, announces and integrates architecture and structure for a spectacular experience before revealing the ramp as a structural force majeure.

According to the project team, the benefits of using steel construction for Bloomberg London included providing long span uninterrupted floorplates and small structural zones relative to the span, with fully integrated services within the structural depth.

Complex transfer structures could be incorporated within the building, saving space when compared with other materials. The project showcased skill and workmanship through the creativity of the devised structural solutions that achieved the architectural design intent within this modern office environment.

Decking was supplied by Richard Lees Decking (a William Hare subsidiary) and installed using Prodeck. The majority of steelwork was fire protected using FX2003, however the roof trusses on the north building used epoxy intumescent paint with the remainder of the roof frame being glass flake.

Summing up, the judges say the elegant exterior of this major building, a polite addition to the City, conceals a fabulous interior supported by a highly innovative design in steel. The unique triangular column grid and roof transfer system create the large open spaces required by the client, whilst the vortex transfer structure and atrium ramp produce effective yet stimulating circulation routes. The attention to detail throughout the project sets the highest standard for commercial office accommodation.