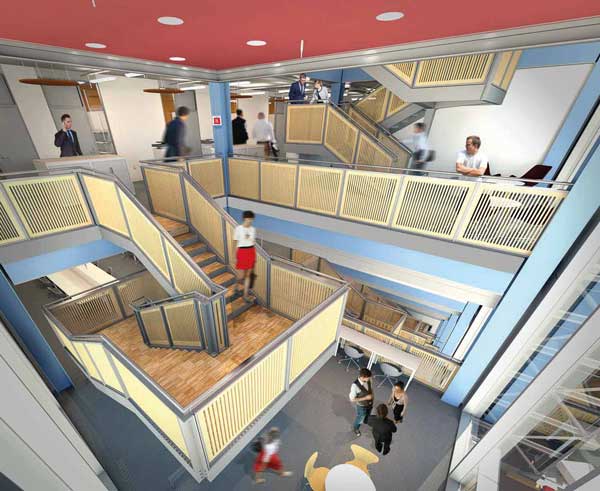 A famous London seat of learning has chosen to use an aesthetically-pleasing exposed steel frame for its latest redevelopment project. Martin Cooper reports.

Situated just south of Lincoln Inn Fields, and just a short walk from the LSE’s Academic Building (see NSC May 2007), the CBR project replaces four previous buildings that were demolished as they were deemed to be no longer fit-for-purpose.

Once complete the project will offer a slightly smaller gross internal floor area of 15,507m² as the scheme also includes a new landscaped public square.

A modern and stylish environment will be created by leaving much of the new building’s steel frame largely exposed, a design that has required a number of bespoke steelwork elements in order to fulfil the project’s architectural vision.

Another part of the architectural intent is to provide a slimmed down floor construction, in order to maximise available space. This design has been achieved by using RHS or plated floor beams, featuring bottom plates to support the building’s long span precast floor units which sit within the depth of the beams. 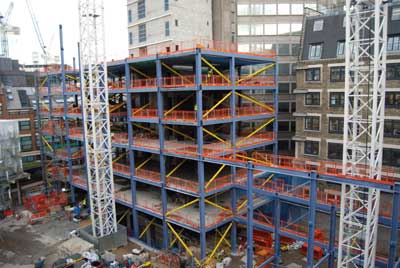 The steel frame will remain exposed 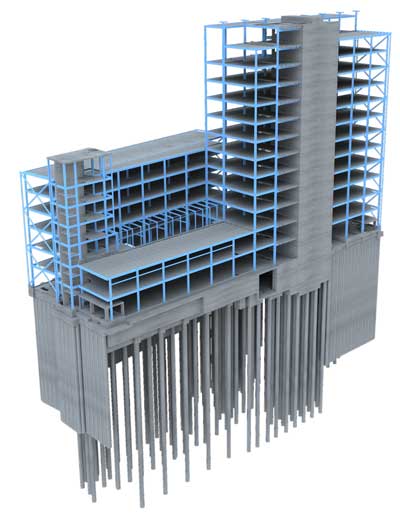 Model of the steel frame and foundations 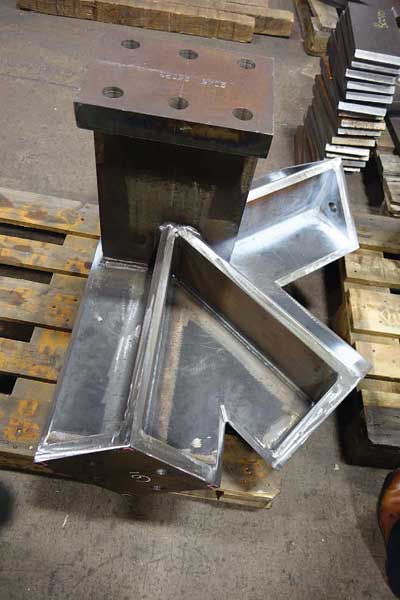 An external bracing node at the fabrication yard 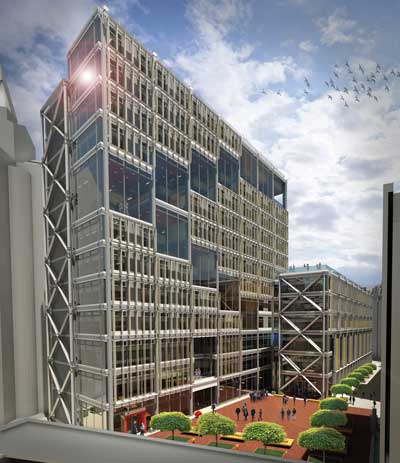 External crossbracing bookend both parts of the project

As exposed steelwork plays such an important role within the design, the fabrication process had to rise to the challenge accordingly as Mace Project Director Frank Connolly explains.

“Billington, our steelwork contractor, was tasked with making sure that the majority of the steel connections were hidden from view in accordance with the client’s requirements.

“Flush connections are the order of the day, or alternatively they have positioned end-plates to help create shadow gaps which, in turn, are then used as repeating architectural features.”

Shear forces and torsional moments applied to the RHS beams, in conjunction with the desire to avoid site welding, led to the bespoke hidden connection design. Many of the steel members have an internal bolted connection, hidden from view and accessed via a hatch.

Having the steel frame and the ductwork exposed not only creates an aesthetic environment within the completed building, it also brings ventilation advantages.

Overall, the building consists of two conjoined parts; the 13-storey Tower Block and the six-storey Houghton Block. At either end of the blocks, that sit side-by-side for just under half of their lengths, exposed SHS bracings bookend the project and form another highly visible exposed steelwork element.

This exo-skeleton bracing, which sits approximately 300mm outside of the building envelope, is not just an aesthetic element as it is also a structural requirement, sharing the stability with two concrete cores.

Significant forces are transferred both within and into the SHS bracing system, and so bespoke cruciform node joints were engineered with machined flush plates to ensure the correct standard of finish was achieved.

Full stability to the structure was only achieved once the entire frame was erected and all of the precast flooring was installed. Until that point was reached Billington had to install temporary bracing to each floor, which was only removed once each level was fully complete.

According to Billington Structures Managing Director Mark Smith, to allow flexibility in the overall build sequence the temporary stability system was developed to largely ignore any benefit that the concrete cores may have offered.

“Due to the architecturally sensitive nature of the exposed frame, we had to be mindful of the subsequent impact of any of the connection points for the temporary bracing, and so bolted cleats were used to negate the need for any removal of welded plates,” he says.

The majority of the project’s steelwork begins at ground floor level, however in order to form a large subterranean auditorium two large plate girders had to be installed during the basement works programme.

“The basement level is predominantly formed with concrete, although we did use steel plunge columns for the foundations,” explains Mr Connolly.

“This subterranean level will be used for plant rooms, but it also houses the building’s 200-seater auditorium and associated spaces such as a bar, and this large column-free area is formed by the two long plate girders.”

Encased in concrete and positioned at ground floor level, the two girders measure 17m long × 1,600mm deep and each one was brought to site in two pieces for ease of transportation. The main steel frame has been erected entirely by tower crane, but these girders needed a 400t-capacity mobile crane to be used for their installation.

The part of the basement that contains the auditorium does not lie beneath the new building, but instead it is positioned in front of the structure and below the new public square.

“Creating the square was integral to the overall scheme and having the auditorium below it was the most efficient position,” says Mr Baptista. “Because of the girder’s position they are working extremely hard as they are designed to carry heavy loads from fire engines in an emergency, and a mobile crane required to replace rooftop plant.”

Access to the auditorium is via the Tower Building’s atrium, which accommodates a staircase to the lower level and is a void formed with exposed steel columns that start at basement level.

The atrium also offers access to the Tower’s main staircase, known as the meandering stair as it as it shifts along the structure one bay per floor.

Formed with a lightweight prefabricated steel frame, this staircase was lifted into position piece by piece along with the main steel frame. Its design is said to mimic the movement within the square, as well as allowing better connectivity and collaboration between different departments on different floors.

Summing up, Mr Connolly says this is a complex and challenging project on a confined inner city site, surrounded by busineses and our client’s other facilities. Collaboration, such as having a visual mock-up of the steel frame on-site to iron out any snags prior to the steelwork being delivered, has been the key to the project’s success.