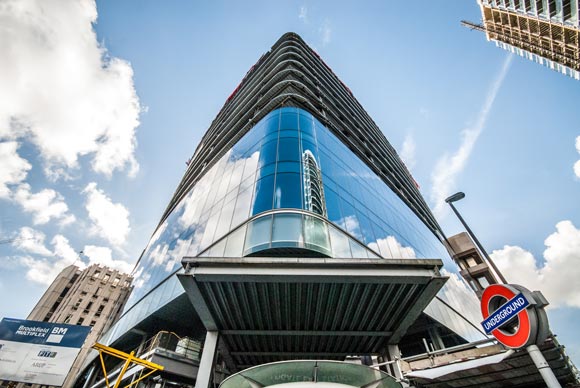 A steel solution has allowed the construction of an 18-storey commercial development to be built on top of an existing raft foundation originally designed to support a smaller building. Martin Cooper reports from east London.

Perched on the City of London’s eastern boundary, Aldgate has for a long time been overshadowed by the square mile’s many ultra modern steel and glass high rise buildings.

However in recent times a number of developments have helped to regenerate this part of east London and, combined with its proximity to the City, Aldgate is now a desirable place to live and work.

Adding to the area’s future stock of commercial office space is an 18-storey structure known as Aldgate Tower currently being developed by Aldgate Developments and built by Brookfield Multiplex.

Designed to achieve a BREEAM ‘Excellent’ rating, the building will provide 16 floors of Grade A office space, plus two upper levels for plant equipment. Below ground the structure is founded on an existing three level reinforced concrete basement raft, a feature that has had an overwhelming impact on the design and construction of the tower. 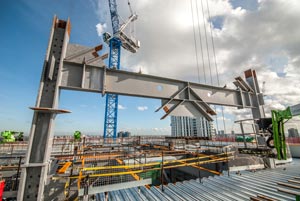 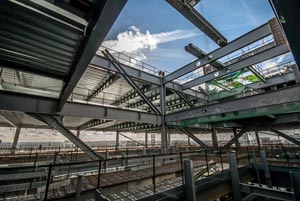 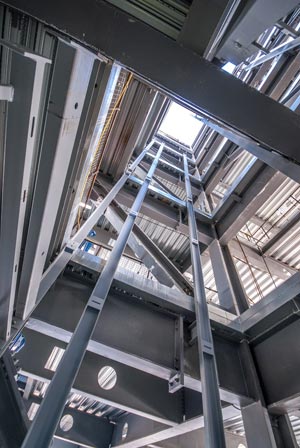 A steel braced core is positioned above the existing raft 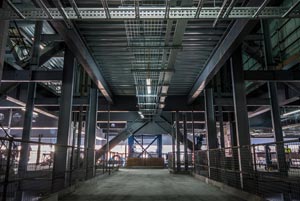 The raft was constructed in 1982 for a previous development, and RBS the project’s neighbour uses the majority of the lower two floors of the basement for its canteen and office storage.

“As the raft is in use it had to be retained and incorporated into our design,” explains George Amy, Brookfield Multiplex Project Manager. “This meant we had to use a framing material for the new building that could be safely and quickly erected above functioning office space.”

A steelwork solution was the answer, as the material not only helped the contractor to build over RBS’s subterranean facilities, it also allowed the new structure to be considerably higher than the originally proposed structure.

Steelwork’s lightweight attributes consequently allowed the construction project to achieve its aim of increasing the lettable office space, while incorporating an existing basement.

“A steel frame supporting metal decking offered us the lightweight solution we required,” explains Ben Tricklebank, Arup Project Engineer. “However, just as important was the fact that steel trusses could be quickly erected over the RBS delivery road at night without disrupting its use.”

However, building on top of the raft meant a traditional concrete core in the middle of the tower was not feasible. The answer was steel yet again, and the installation of a 9m x 20m braced core to stabilise the overall frame. This was erected at the same time as the rest of the steelwork, allowing a faster erection programme.

The steel core starts at ground floor and sits on a transfer structure, comprising of 47t beams that distribute the loads to the raft’s concrete columns. At ground level the core frame’s columns are offset to allow the upper floors of the new building to have a larger grid than the existing raft.

The amount of load that could be accommodated by the existing basement was another important consideration, and consequently the 750t capacity mobile crane needed to install the steelwork for the lower part of the core could not be positioned on the raft.

“For the duration of the project we’ve been allowed to use an adjacent park to position craneage and for storing materials,” explains Mr Amy.

By positioning a large mobile crane in the park the steel erection team had the capacity and reach to install not only the core’s transfer beams, but also the 18t core plate girders columns.

An even larger crane, with a 1,200t capacity, was required to install a steel transfer structure at ground floor level. Formed by a series of plate girders, this steelwork bridges over part of the RBS delivery road and forms a mezzanine plant floor. With space at a premium in and around the site, and the crane too heavy to be positioned on the raft, it was also positioned in the park.

“Apart from these areas the rest of the steelwork was erected by the site’s tower crane,” says Alex Harper, Severfield-Watson Structures Contracts Director.

Due to the heavier loads at the base of the new structure, columns up to level 5 are fabricated plate sections, while above this floor UKBs take over. All floors are formed with 750mm deep Fabsec beams, with the longest clear spans being 18m. 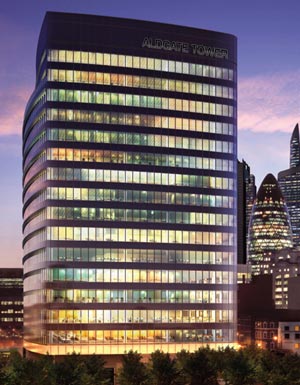 At level 15 the building steps in to form a terrace and here a further transfer structure using 900mm plate girders had to be installed.

The 150mm disparity between the plate girder depth and the Fabsec floor beams had to be absorbed within the concrete topping, to maintain a uniform floor-to-ceiling height for all levels.

In addition to the PV cells, the roof will incorporate a brown roof system that will utilise recycled products and create a natural habitat to attract and support wildlife.

Aldgate Tower is due for completion in late 2014.

The need for lightweight construction

Dr Richard Henderson of the SCI considers the benefits of choosing structural steel over reinforced concrete in terms of building weight. 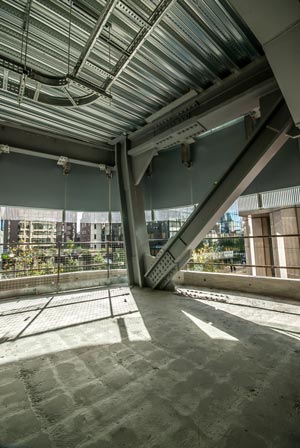 Building over existing foundations clearly imposes constraints on the new structure, involving both the arrangement of the vertical load-carrying structure and the magnitude of the loads which are to be carried. The building developer will be keen to maximise the floor area of any new building, but the means of achieving this are restricted where the freedom to choose the capacity and position of individual foundations is absent. It is normal to choose the lightest superstructure when building over difficult ground but this choice is more emphatically made where the position and capacity of foundations are pre-defined.

Structural steelwork in buildings essentially involves linear elements and connecting them together, whereas concrete buildings involve more two-dimensional, plate elements: not only in floors but also in vertical elements providing lateral stability. A floor in structural steel acting compositely with concrete on metal decking is likely to be about half the weight of a post-tensioned concrete floor. Core structures in concrete involving solid walls are likely to be between a half and two thirds of the weight of a braced core in structural steelwork.

Equivalent measures in terms of tension or bending are more difficult to define because only the reinforcement is acting in the tension zone of bending elements and concrete tension elements are rarely used. Measures of specific stiffness of concrete are also difficult to define, because of the composite nature of the material and the approximate relationship between the strength of concrete and its elastic modulus