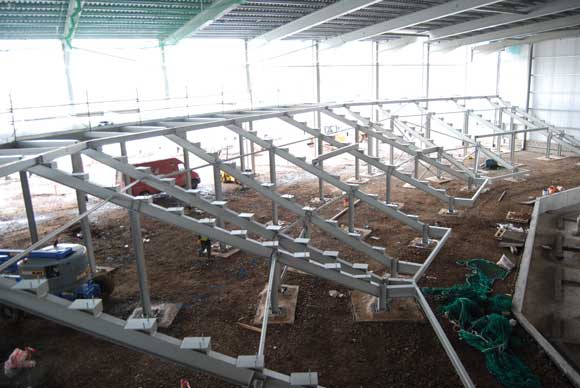 The auditorium can be enlarged in the future

Including a large flexible auditorium and a sports hall, the Green Pastures Church in Ballymena is benefitting from using a steel framing solution. Martin Cooper reports.

Green Pastures spokesperson Jason Kennedy says: “We believe that the church of Jesus Christ should have a relevant and influential position at the heart of the community. We are focused on meeting the needs of our local communities and committed to bringing the hope of the Gospel of Jesus to the local area.

“The new facility is the first stage of a larger, long term not-for-profit legacy project, desiring to play a part in bringing spiritual, social and economic revival to our town.”

Green Pastures was founded in Ballymena in 2007 by Jeff Wright, whose father started Wrightbus, the town’s largest employer and the manufacturer of London’s latest red buses.

The church has grown significantly in just 11 years and says it has over 1,000 people of all ages in attendance across its Sunday services. Known as Project Nehemiah, the new Church and its many facilities will be a big boost to the local community.

Construction of the Church got under way last year with an enabling works package that included installing drainage and preparing the plot by levelling the sloping ground.

Locally-based contractor martin & hamilton (m&h), who are responsible for the Church structure, then started on-site during July and began by installing pad foundations and lift shafts in readiness for the steel frame to be erected.

“As with many buildings it was important to get the structural frame up as quickly as possible on this job to allow the numerous follow-on trades to get started,” explains m&h Project Manager Martin McCready.

To this end, steelwork contractor Walter Watson had fabricated, supplied and erected all of the project’s 840t structural steel by the end of March. 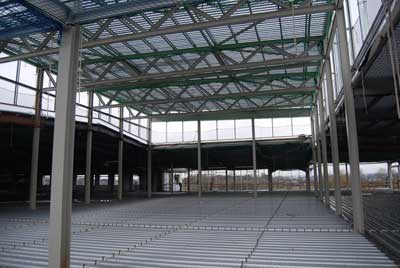 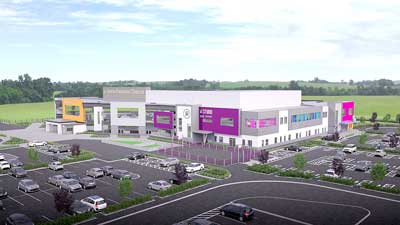 How the completed facility will look

“Steel was not only chosen for its speed of construction,” adds Mr McCready. “It is also provided the most efficient way of creating the very long spans needed for the sports hall and auditorium.”

The auditorium’s roof is formed by a series of long rafters, spliced together at mid-point to create an overall 46m clear span. They were transported to site in 23m-long pieces using Walter Watson’s own fleet of extendable rear steer trailers.

Two 60t-capacity mobile cranes were used to lifted the 7.5t rafters into position, with each crane lifting a single beam. The rafters were then connected to the stanchions at eaves level before being connected at the apex haunch. One crane would remain connected to the portal rafter, while the other crane lifted the purlins and tie beams into position. This stabilised the portal before the second crane released its load.

At two locations within the main auditorium roof, the 43m-long rafters are supported off a carrier beam spanning two bays to leave a large clear opening for a skylight.

“Additional lateral bracing had to be designed and fitted at these two locations to stabilise the carrier beams in the absence of any first-floor slab to prevent spreading of the portal and dipping of the apex,” explains Walter Watson General Manager Structural Division Trevor Irvine.

The auditorium has been designed as a portal frame and it is propped at the surrounding first floor of the building to negate any deflection.

Some added flexibility has been designed into the auditorium so that it can be doubled in size to create a larger 3,200-capacity venue. At present the auditorium’s seating rakers are arranged in a quarter circle configuration around a stage, but by removing one perimeter wall further steelwork can be bolted to the frame to form a larger half circle auditorium around an enlarged stage.

“A steel-framed structure was always the preferred design for this building for a number of reasons, with its flexibility and ease of adding an extension a prime mover,” says RPS Project Engineer John Ellis.

Covering the auditorium’s roof is a seven-layer insulated cladding, which has been specified to prevent any noise from escaping from within the venue to keep the neighbours happy.

Surrounding the auditorium on three sides is the building’s first floor. This upper level contains the structure’s other large column-free space; a double-height sports hall.

Forming the sports hall is a series of trusses that required a tandem lift erection procedure to install them. The trusses measure 18m-long × 2m-deep and they were brought to site as complete sections on extendable trailers and then erected using two mobile cranes.

The two-level element of the building has been designed as a braced frame with bracings located within the exterior walls. In order to avoid windows and doors, wind portals (goal posts) with no diagonal members have been used.

A spokesman for the Church said: “Green Pastures Church believes in Ballymena and is committed to supporting local companies, local jobs and the local economy.”

Green Pastures hopes to have its first service in the building in late 2019.