Centre of Engineering and Manufacturing Excellence 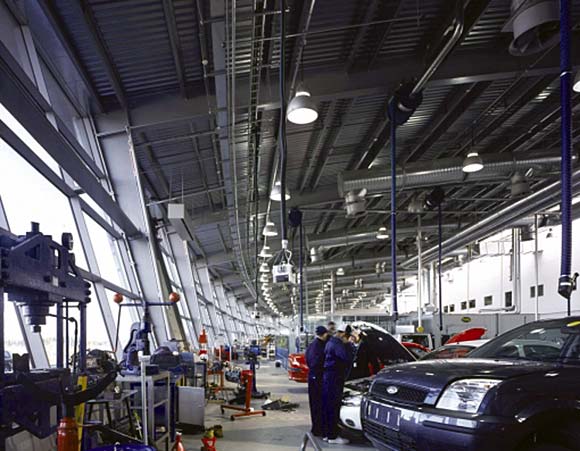 CEME is a purpose-built project using the best architecture to provide excellent educational facilities for motor engineering and business studies.

The new 13,000m² Centre of Excellence for Manufacturing and Engineering (CEME) designed by Sheppard Robson will be a dynamic hub of education, enterprise and manufacture for Dagenham, an area of east London best known for its association with The Ford Motor Company. The £23m Centre opened its doors to 1,200 students in September 2003 and is the first purpose-built campus in the country to offer outstanding architecture and state-of-the-art design features linked to a ‘one-stop-shop’ learning environment.

CEME is the flagship project in the Heart of Thames Gateway’s (HOTG) strategies for the regeneration of the east London corridor and the improvement of opportunities for local people. Investment in the £36m project has come from a unique partnership of public and private sector partners including the Ford Motor Company, the London Development Agency, Barking and Havering Colleges, the European Regional Development Fund, the DTI, the Single Regeneration Fund and the Heart of Thames Gateway partnership. HOTG is a private/public sector partnership which has been formed to work with the boroughs of Barking & Dagenham, Havering and Thurrock and to stimulate the regeneration of the sub-region. 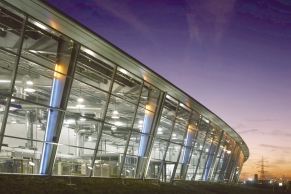 CEME, the first tangible evidence of the regeneration strategy, is considered to be the catalyst for the socio-economic regeneration of the area. It will deliver an unrivalled educational environment, providing both further and higher education facilities for motor vehicle engineering in Phase One, and business studies students in Phase Two. Barking and Havering Colleges will be combining their engineering courses, whilst Ford, which closed its Dagenham car manufacturing plant last year, is a major contributor to the partnership and to CEME itself. Phase Two sees a linkage between Ford and Loughborough and Warwick universities. The investment provided by the partnership is intended to encourage other businesses to invest in the region and regenerate a once-vibrant economy. 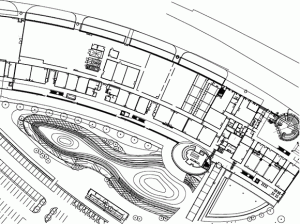 The brief called for an iconic building which would act as a flagship for the regional regeneration strategy and fulfil a wide variety of educational functions. As the flagship project for a nationally important regeneration initiative, the building was also required to be an exemplar of sustainable design. In addition, the need to move forward with the regeneration as soon as possible meant that Sheppard Robson had to take the building from concept to completion in 30 months. Works to the Phase One design began on site in October 2001 with practical completion awarded in May 2003, and the fit out completed in August 2003.

The multi-headed client body and the user groups necessitated a rigorous briefing process, which eventually produced a consolidated 200- page document detailing the exact requirements for the building. The concept and scheme design stages were equally exacting, again due, in the main, to the varying requirements of the users, made even more difficult by virtue of the extremely challenging budgetary pressures prevalent at both the outset and throughout the project. 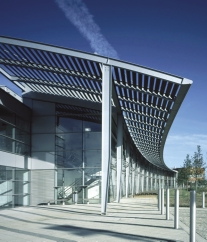 THE BUILDING
Located adjacent to the A13 trunk road, the glazed north elevation offers passers-by views of the processes and activities within the huge workshop areas. The angled glazed façade is punctuated, towards its eastern extent, by the metallic nosing of the phase two auditorium which protrudes through the second phase of the north elevation. The auditorium itself dominates the business studies workshop, and offers a “Harvard” model lecture theatre and the opportunity for performances in the round.

CEME is centred on a 150m-long structural steel spine which is literally the structural backbone to the entire building. The two-storey spine houses the teaching accommodation whilst also supporting the roof plant. To the north of the spine lies the double-volume workshop area. This huge volume is formed from curved I-sections supported by the spine to the south and by splayed, tapering steel sections to the north.

To the south of the spine sits the “Street”, a 150m-long interactive zone for the students, teachers and drop-in users alike, with information points and IT hot desking areas, a restaurant and coffee points. Again the central spine supports the curved steel sections to the roof which in this instance are cantilevered beyond the glazed façade in order to support the brise soleil which provides solar shading to the street area. Striking colours have been incorporated along the length of the street, providing a counterpoint to the neutral colours and materials of the technology areas. The southern elevations open out onto a continuous timber deck, which, in turn yields to a landscaped area complete with a lake and outdoor amphitheatre.

Phase Two of the scheme is an extension of Phase One. However, the workshop volume is replaced by a business school. At the centre of this space sits a free-standing auditorium pod. This is formed from 21 identical curved steel sections that are supported by a high level circular steel ring beam, all of which creates a spherical frame for the curved plywood envelope to the auditorium pod itself. 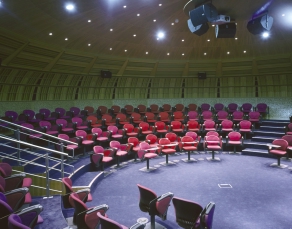 Secondary steelwork supports the double-height curtain walling throughout the building. The southern façade is supported via a striking Vierendeel girder which consists of curved circular sections and is supported by steel tension cables. Timber has been incorporated into the southern elevations to provide a contrast with the steel and aluminium to the north, and to reflect the softer, more human scale of the areas to the south. In this case western red cedar has been used to form the cantilevered brise soliel and the restaurant drum cladding. The restaurant pod punctuates the southern façade, breaking through the glazed elevation of the street in a similar manner to the auditorium pod to the north.

The planning strategy is completed by a crèche which sits at the far east of the site, acting as a punctuating device for the radiating curved spine of the main CEME building itself.

Sustainability forms a key part of the design philosophy, with the centre being built on a brownfield site, formally used by Ford as a dumping ground, which has undergone extensive and exhaustive remediation works.

Photovoltaics have also been incorporated to provide an integrated roof solution to the canopy and the street. The projected 115 kW output will be the largest array of its kind in the UK. Natural ventilation to the street and workshop areas, together with daylight-sensitive lighting controls further reduce the energy requirements of the building, whilst a green transport policy has been developed together with Transport for London and Havering Council to incorporate new bus routes from the neighbouring areas.