A curved cable-stayed footbridge, which has the deck supported along only one edge from a sloping mast, has become a landmark in central Swansea.

This project is part of a larger scheme comprising two bridges across the River Tawe in Swansea, with an additional opening span and associated quayside walkways. Both bridges connect the city centre with the new Port Tawe Innovation Village, a publicly-funded redevelopment project currently under construction on the east side of the river. Flint & Neill Partnership was appointed by the Welsh Development Agency to prepare the concept and detailed designs for the structures, to act as project manager and to supervise construction.

The most prominent feature is the northern crossing, now known as the Sail Bridge because of the maritime references in its mast and stays. It’s a landmark structure of the highest quality, visible from all the main gateways to the city, and has already become a familiar icon for the region to symbolise the rebirth of this part of Swansea.

View of bridge at night.

THE BRIEF
The design grew out of an intense period of development and consultation with the client and the local authority. The designers developed alternative ideas and proposed an alignment relating directly to the desire lines on both sides of the river. This also afforded the possibility for a small piazza at each end of the bridge to make the most of the pleasant riverside environment. All parts of the route were required to be accessible by those in wheelchairs, which limited the maximum gradient on the bridge to 1:20.

The requirement for units in the redevelopment to be pre-let at an early date, with the necessary infrastructure visibly in place, resulted in an unusually compressed programme – from design inception through to constructed completion in less than 15 months. This factor kept the pressure on the project throughout and drove many of the decisions regarding procurement and construction.

The brief also required a minimum and sensitive intervention in the environment, without causing unacceptable blockage to flood flows in the river. Consideration had to be given to the needs of spawning salmon and the local otter population among others, and these and other factors informed the design to a certain extent.

DESIGN APPROACH
Although the structure adopts a classic symmetric cable-stayed configuration, in cross-section the deck is held along only one edge. The simplicity of the overall form is thus in contrast with the apparent precariousness and delicacy of the asymmetrically suspended walkway.

The design responds to the desire for a clean and elegant sweeping curve across the river and the need for a robust structure which will stand the test of time. By using stay cables, the deck could be kept very shallow, maximising the clearance over the water while maintaining the necessary gentle gradient. These stays in turn are supported by a mast whose scale and appearance presented the opportunity to create a landmark, visible from some distance around to draw attention to the presence of the crossing. 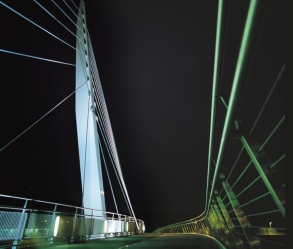 View of bridge at night.

The choice of materials took into account issues of economy and low maintenance, as well as sustainability. Minimum whole-of-life cost was a fundamental consideration as well as low initial cost, and this led to decisions regarding durable paint systems for the steel deck and towers, the choice of aluminium decking and stainless steel balustrades, and the detailing of all components to facilitate inspection and maintenance. The mast base stands on a sculpted concrete plinth and is set at a level above the maximum expected flood level for maximum durability.

THE STRUCTURE
The 142m long curved bridge deck is supported along one edge by a set of eighteen 60mm diameter spiral strand stays in a semi-fan array. The cycle track on the inside of the curve is carried on a slender steel box girder to provide the necessary torsional stiffness to cope with the eccentric cable support whilst the cantilevered ribs support a lightweight aluminium decking for the footway along the outside of the curve. Tuned mass dampers were incorporated to control potential dynamic movements under large crowd loading, and aerodynamic fairings on the upstream edge control wind-induced vibrations.

The 42m high steel mast is shaped to form a distinctive feature supported on a sculpted central concrete pier. It is inclined backwards in sympathy with the plan curvature of the deck and in order to minimise transverse bending effects at the base of the mast.

A stainless steel balustrade with wedge wire panels along the inside edge houses the deck lighting, and an open parapet with stressed wires on the outside lends a lightness and delicacy to achieve a high quality and attractive finish. 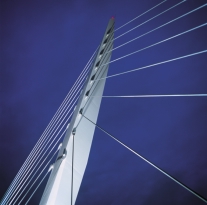 THE USE OF STEEL
The mast cross section varies throughout its height and consists of a curved front plate cut from a cylinder with flat plates elsewhere, all designed to facilitate fabrication of this relatively complex shape. The cross-section changes from a filleted square at the base through to a kite shape at mid-height, culminating in a triangular configuration at the tip. This developing form is achieved without the use of warped planes (all faces are ‘flat’) and yet the final form is visually complex. The plate thicknesses in the mast vary from 45mm at the base to 10mm at the tip.

The project was procured using the NEC Target Cost Form with Rowecord Engineering Ltd appointed early on in the process. Very close cooperation between the design team and Rowecord meant the highly complex nature of the mast was retained through the design development to deliver an end product that is incredibly faithful to the original scheme design.

Furthermore, in terms of detailing, Rowecord was able to advise fabrication methodologies that surpassed the design teams expectations in terms of quality and final surface finish. One example of this is the sharp arris on the back of the mast from mid-height to apex. Because of the extremely acute angle between the side plates, the design team had envisaged a shadow gap detail at the junction between the plates to lessen the visual impact of the welding. Rowecord was able to offer an alternative detail where a kite-shaped bead of solid steel, running the full height of the intersection, formed the junction between the two plates. This allowed for a sharp edge where the plates met, as well as simplifying the welding details. 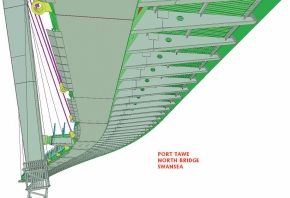 Drawing of underside of deck.

Steel is also used for the deck box sections and the cantilever ribs supporting the pedestrian walkway. The 20mm deck plate is stiffened longitudinally, but the 15mm webs and 20-30mm thick bottom flange are unstiffened to simplify fabrication and box assembly. The stay anchorages are formed from simple intersecting tubes designed to facilitate proper alignment because of the complex 3-dimensional geometry. The whole bridge was modelled by Rowecord as a 3-dimensional plate model to ensure correct geometry and control of tolerances, with the result that there were very few problems in the alignment and assembly of the units. 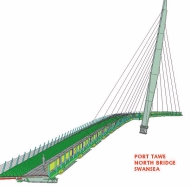 The mast was made in four sections, each of approximately 20 tonnes which were transported to site by road and carefully aligned on a jig in the car park area on the west bank of the river prior to joints being welded and painted. The final craneage weight of the mast was 78 tonnes, from an initial material procurement tonnage of 93 tonnes, and the mast was lifted in one piece using a 1,200 ton crane on the west bank with a lifting radius of 78m.

The middle three deck sections weighing a total of 50 tonnes were also jig-assembled on the west bank, prior to lifting into place on a temporary trestle. Nine further deck units weighting 20 tonnes were lifted into position to complete the deck. The sub-assembly method maximised offsite fabrication, and permitted rapid erection, reducing the risks associated with using large lifting equipment at an exposed location. Assembly on the temporary trestle permitted accurate alignment of deck sections prior to welding and stressing of stays.

IMPLEMENTATION
The final cost of the Sail Bridge was approximately £2.8m. This represents about £3,600 per square metre, which compares favourably with other high quality landmark bridges of similar scale and complexity. On announcing the bridge as winner of the UK Civic Trust’s Welsh Regeneration Award, the judges hailed the structure as ‘a first class example of the potential impact of inspirational design’.