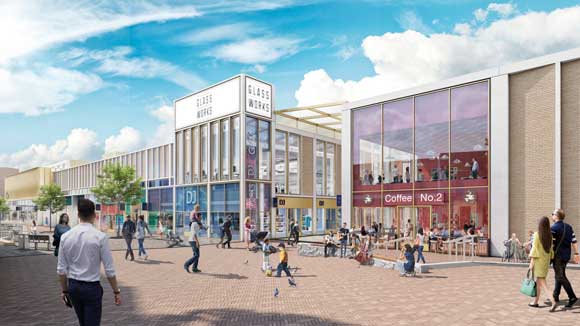 A multi-award-winning regeneration scheme, The Glass Works will provide a vibrant and modern retail and leisure offering which will transform Barnsley town centre.

IBI Group’s Mike Richardson says: “The regeneration of Barnsley will make a significant difference to the local people and open up the opportunity for further investment into the area.”

“Acting as architects, planners and landscape architects on this project, we are working with the council to shape a place that is attractive, accessible and characterful – making a better Barnsley for future generations.”

The second phase of The Glass Works includes a number of steel-framed facilities. They will be home to a variety of retail and leisure facilities including 26 new retail units, a 13 screen Cineworld, seven family restaurants, a Superbowl UK bowling, soft place and laser quest, a new public square and a 500-space multi-storey car park. 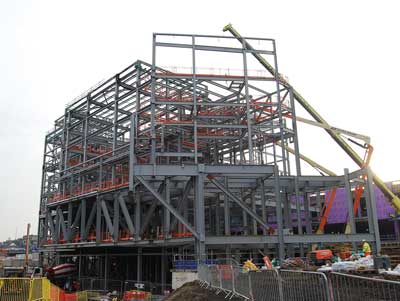 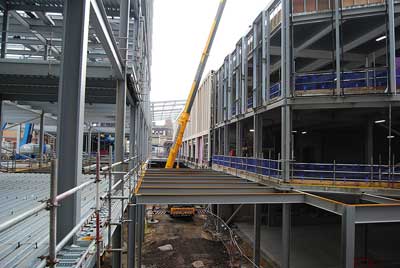 A central covered boulevard will separate the project’s main structures

Local labour is at the heart of the project as Ryan O’Loughlin, Director of locally-based Henry Boot Construction, says: “We are delighted to be partnering with Billington Structures on phase two of The Glass Works project, which continues our commitment to investing in Barnsley-based businesses wherever possible.

“After a successful collaboration on phase one, we are confident Billington will deliver a high-quality scheme on programme and to budget, and awarding this contract ensures a significant amount is reinvested in local jobs and training opportunities for the people of Barnsley.”

As with many town or city centre projects, the steel erection programme for this scheme is being undertaken in a sequenced method. This is due to the confined nature of the site and the proximity of the existing and operating businesses, not the least the recently completed Barnsley Markets, which formed an integral part of phase one.

The majority of the project, consisting of the retail block, the cinema, car park and retail structure, are centred around a 10m-wide covered boulevard, which separates the three buildings.

These buildings and the boulevard are built above a basement level, which will accommodate back-of-house facilities and storerooms. The steelwork for the basement generally follows the grid pattern of the retail zone, which is directly above.

Although the structures that sit above the basement are connected via this lower level, they are structurally-independent and separated by movement joints.

Of the three structures, one block is entirely retail, measuring 97m x 30m and consisting of two-levels of shops it abuts the market hall on one side and the boulevard on two elevations. Steelwork is based around 8m x 9.25m grid pattern, although parts of the structure have an increased grid with beams spanning up to 12m.

Facing one elevation of the retail block, the structure incorporates two levels of shops at ground and first floor, with a six-level multi-storey car park above.

The main part of this structure measures 73m x 37m, while the lower two-storey retail zone continues eastwards along the boulevard to create an extra 52m x 19m area.

In order to maximise the efficiency of this structure, two different grid patterns have been used for each of the functions. The lower retail levels are based around a column spacing of 7.5m x 9m, while the upper car park levels have a larger grid of 7.5m x 18m as one intermediate column is omitted. Because the car parking levels will be partially exposed to the elements, all of this steelwork is galvanized.

Vehicular access to the car park will be via a circular 28m-diameter rotunda structure, attached to the rear elevations.

The third of the structures that front the boulevard is the cinema block, the most complicated steelwork design of all the buildings.

According to Billington’s design team, it has a highly complex layout and design. On plan, it has two angled intersecting rectangles, 37m x 85m and 54m x 39m and consists of a ground floor retail level with multiple levels above, including cinema access, projection levels and escape routes. Roof level has a concrete decked plant area running along the middle.

Because of the array of uses the upper cinema levels must accommodate, there is a transfer structure separating the regular retail grid pattern from the first floor’s bespoke column layout.

Adding to the complicated nature of the column layout, most of the cinema screens are a different size. The largest is an IMAX screen with a maximum span of 24m.

There are also extensive cantilever and transfer structures, particularly within the cinema access level, as well as around upper projection rooms. A combination of trusses and beams have been used to act as transfer members in these areas.

A further challenging issue for the design of the cinema block is a culvert which crosses the site under the building’s footprint. This has been bridged using five one-storey-high transfer trusses, which were brought to site in three sections.

Delivering the steel to site in manageable loads will also play a key role in the final stages of the cinema block’s construction programme. Some of the internal walls need to be constructed prior to the seat terraces to allow for acoustic detailing to be met. This means that some of the steels to the terrace must be sited early, but not bolted into position to allow this to happen. These steels were delivered to site affixed to other steels to make this easier later in the build.

Separated from the main boulevard section of the development by a new landscaped public space, the bowling alley building is a standalone structure measuring 59m x 35m.

Similar in design to the other structures, whereby the steel frame’s stability is derived from bracings and a steel core, the building accommodates a bowling alley on its upper level, with the ground floor housing restaurants.

The Glass Works is due to be completed by Summer 2021.

The first part of The Glass Works development provides a new home for Barnsley’s famous market, a new independent food court, Market Kitchen, and the flagship Library @ the Lightbox, a state-of-the-art community hub.

Other confirmed names, which will open in 2021, include Next, Nando’s, Muffin Break, independent restaurant MEET, Sports Direct and its fashion arm USC, Cineworld and Superbowl UK.

For the latter structure Billington Structures fabricated, supplied and erected 450t of steelwork to strengthen the existing concrete frame to allow the hall to be reconfigured. New steelwork was also erected to form a new façade. The two-storey building accommodates the famous Barnsley Markets over two levels, with a new independent food court, Market Kitchen, providing a range of eateries on the upper level.