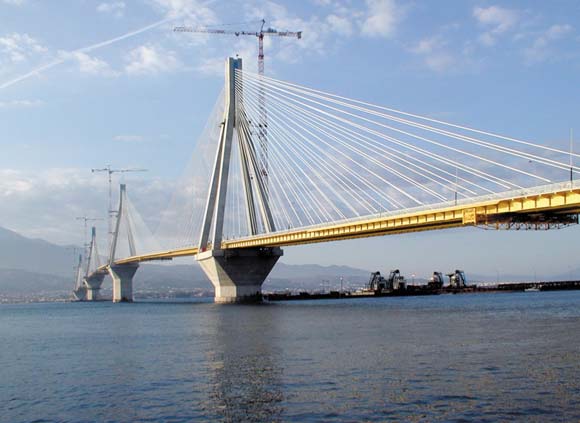 As a result of heavy storms some of the steelwork for the Rion-Antirion Bridge in Greece fell into the sea from a ship during transport from the UK. The steelwork contractors had to make huge efforts to replace it in time to keep the work on programme.

The Rion-Antirion Bridge in Greece, the longest cable-stayed structure in the world, is currently under construction across the Gulf of Corinth joining the western mainland of Greece to the Peloponnese peninsula. The project is the work of Kinopraxia Gefyra (a joint venture of Vinci Grand Projets and six Greek contractors) with the services of the highly specialised technical team from Cleveland Bridge UK fabricating and assembling, the bridge deck steelwork. The site team began work in October 2002 and completion is scheduled for September 2004.

STORM CAUSED SETBACK
This complicated project has brought unique demands but one year into the programme, steady, strong progress from the Cleveland Bridge team ensured that works were progressing as required and no insurmountable challenges had been encountered. However on 31 October 2003, the project manager, Alan Platt, took a telephone call relaying the news that the ship carrying the seventh shipment of steelwork from the UK (out of eight) had encountered extremely heavy storms in the Bay of Biscay and as a result, six main girders bound for the bridge, with a total weight of 160 tonnes, had been lost overboard. Added to this, the hold cargo had shifted significantly causing extensive damage to many other components. 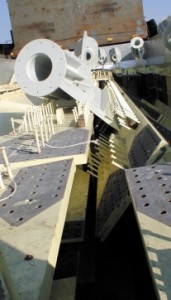 The hold cargo had shifted and was unstable. (Photo: J Hartley)

Fortunately none of the crew of the ship were hurt but the news of the lost and damaged materials put Cleveland’s plans, and the overall project timings, potentially in jeopardy. The technical teams were brought together, both in Greece and in the UK, to consider the situation and discuss what could be done to meet the significant challenge of securing new materials in time to meet the project’s requirements.

RE-FABRICATION REQUIREMENTS
As each of the main girders was unique and could not be substituted by others on the project, replacing the lost girders had to be organised from scratch. Added to this, the bridge deck segment assembly lines on site required the lost pieces in ten weeks if the project deadlines were to be met.

The only answer was to re-fabricate the lost pieces from square one so, before the ship reached the site, the fabrication team was scouring all of Europe’s steel mills and stockists for replacement plate and tube to re-fabricate the girders. Due to the high grade material which was S460ML, Z quality and up to 90mm thick, it became impossible to find enough of the right steel in the required time and it was necessary to swiftly review all the options and consult with the client and designer to find acceptable alternatives.

RE-DESIGN AND RE-MAKING
Together the teams agreed acceptable solutions, in both grades and sizes, which allowed the project to stay on track. Within two weeks of the storm, all the material was secured from the UK, Germany, Holland and Greece and was on its way to the Cleveland Bridge fabrication facility in Darlington, UK.

Whilst the material was being secured, the production planning team was re-organising the workshop to cope with the unexpected additional workload and recovering the jigs and templates previously used for the fabrication. Work began within three weeks of the loss with the aim of dispatching all the pieces before Christmas 2003, so that time could be made up by travelling over the festive period. 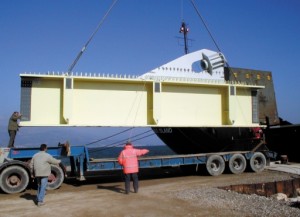 Six main girders similar to this were lost at sea. (Photo: A. Platt)

TRANSPORT DIFFICULTIES
The next major hurdle to overcome was the organisation for the transportation of the girders to Greece. In their finished form they were too tall to travel by road so shipping remained the preferred option. However, chartering a ship with such a relatively small cargo in a short timescale was difficult and alternative options like part fabrication with completion on site were reviewed in order to increase the transport options. Eventually, however, available space was identified on a partially loaded ship due in Teesport on 22 December 2003. Fabrication, painting and transport to the port had to be implemented in a four-week period to meet this extremely tight deadline. Painting of the girders was completed on 20 December 2003 and all the pieces successfully loaded on the ship on 22 December.

Luckily, the ship made steady, storm-free progress towards Greece, and arrived on 8 January 2004, just under 10 weeks after the pieces were lost. The team immediately swung into action with the first piece going straight off the ship onto the segment assembly line, narrowly avoiding any delays to production. 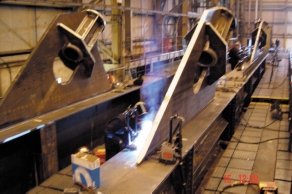 RAPID REPAIRS
Whilst the re-fabrication race was on in Darlington, the site team took delivery of the remainder of the shipment, which was seriously damaged. The hold cargo, which had become loose in the storm, was unstable and very difficult to unload and this process took five days instead of the usual three. The inspection process began to assess the damage to the components, as some of the materials were required on the segment assembly lines within four weeks. Again, the site team had to react swiftly to ensure the overall programme was not delayed.

In total 34 main girders and 27 transverse beams were damaged, meaning approximately 1,100 tonnes of the 2,500 tonne shipment required repair. The typical damage was mangled stiffeners or connection plates, notched flange edges and deformed webs and the initial estimate of the repair work was approximately 23,000 man-hours of work – a mini project in itself. Assisted by the client’s team, Cleveland Bridge’s site team wrote and agreed all the repair procedures. The steel plate and shear studs required for the repair procedure were ordered from UK and Greece and were on site within two weeks. The temporary works racks and fixtures to carry out the repairs were all made from existing temporary works on site, which were modified to suit their new purpose.

The repair work began one week after the ship was unloaded and the first repaired girder was on the segment assembly lines repaired and painted two weeks later without delaying production.

The on-site Cleveland Bridge team monitored the repair work, carried out by existing subcontractor Metka SA from Volos, Greece, whilst still continuing to supervise the original subcontract works. All the structural repair work to the main girders and transverse beams was completed at the end of March 2004 with just some minor painting work outstanding for completion on the segment assembly lines.

COMPLETION AND CONNECTIONS
Despite all the issues and challenges, the last segment of the bridge deck was handed over to the client on the assembly lines for concreting in April 2004. Testament to the efforts of the Cleveland Bridge team, this was eight weeks ahead of schedule!

In June 2004, the bridge deck is due to be joined and following the inauguration, the Olympic Flame will cross the bridge in early August 2004 on its way to the Athens Olympic Games. At the time of writing, the project is expected to open three months ahead of schedule, connecting mainland Greece to the Peloponnese peninsula and bringing undeniable benefits for the local communities and economies.

Alan Platt, Project Manager for Cleveland Bridge based on the Rion-Antirion site in Greece