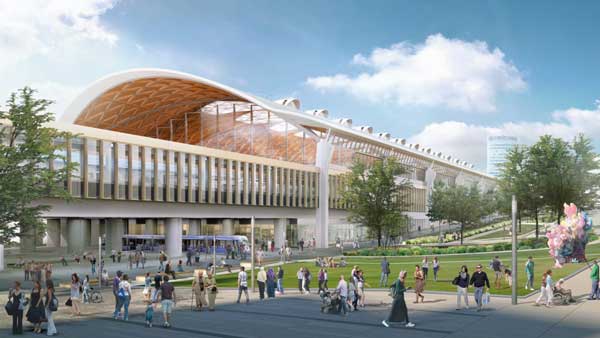 New designs for the two new high-speed rail stations in the West Midlands have been unveiled, with HS2 aiming to create two of the most environmentally-friendly railway stations in the world.

The stations at Curzon Street (pictured)in Birmingham and Interchange in Solihull have been designed to focus on open space and landscaping. They will both be net zero carbon in operation and achieve a BREEAM ‘Excellent’ rating.

HS2 has been working with WSP and Grimshaw Architects on the design for Curzon Street and with Arup on the Interchange station in Solihull.

It is claimed that Curzon Street station in Birmingham city centre will be the first brand-new inter-city terminus station built in Britain since the 19th Century. Eventually, there will be nine trains per hour on the high-speed network in each direction from the station.

Interchange Station in Solihull will be a major new gateway for the region close to Birmingham Airport, Birmingham International station and the NEC.

Like the Curzon Street design, Interchange will be net zero carbon in operation, focusing on reducing energy use by maximising natural daylight and ventilation and using on-site solar panels. The station roof will capture and reuse rainwater and the new designs incorporate sunken rain gardens in the public plaza and an outdoor terrace to the station concourse.

Kim Quazi, Arup’s Lead Architect, said: “The design of HS2 Interchange Station has been influenced by its unique rural setting on the edge of a built-up, urban area and its glass facade will offer expansive views over the surrounding landscape. The striking roof design will maximise the use of natural daylight to create a light, bright and airy interior that is easy to navigate even during the busiest of periods. Passenger experience has been forefront in the way we have designed the station.”