Plans in for Museum of London’s Smithfield cultural centre 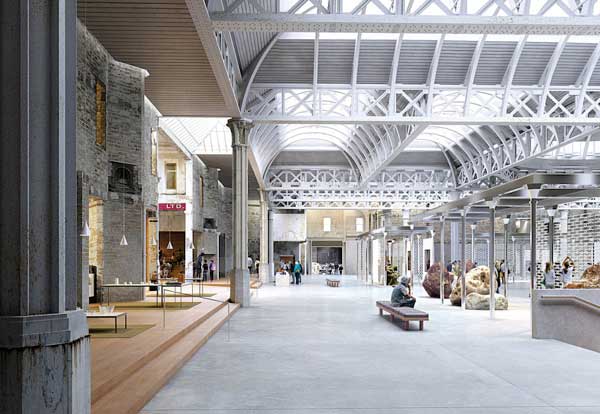 The Museum of London has submitted a planning application to the City of London Corporation to transform a campus of market buildings in West Smithfield into a world-class, 24-hour cultural destination.

The proposals seek to preserve much of the historic fabric of the old market buildings that make up the site, some of which date back to the Victorian era and have fallen into disrepair, by making relatively few contemporary interventions.

Designed by the architectural team of Stanton Williams and Asif Khan with Julian Harrap Architects, the aspiration for this new museum is for it to become one of the top ten attractions in the capital, capable of welcoming over two million visitors a year.

If planning consent is granted the new Museum of London, one of the biggest cultural projects happening in Europe, would become one of the highlights of the City of London’s Culture Mile. Located in the north-western part of the City, it will significantly contribute to the revitalisation of the Smithfield area by building on the opportunities presented by the new Elizabeth line at Farringdon Station.

Sharon Ament, Director of the Museum of London, said: “This is an important milestone for the project, as we formally set out our plans to transform the West Smithfield site and in doing so transform the idea of what a museum can be. It has been four years of hard work by a dedicated and talented project team in order to get here and, while we still have a while to go and money to raise before we open the doors to the new Museum, this is nevertheless a significant step forward to turning our vision into reality.”