Station redevelopment on track with steel 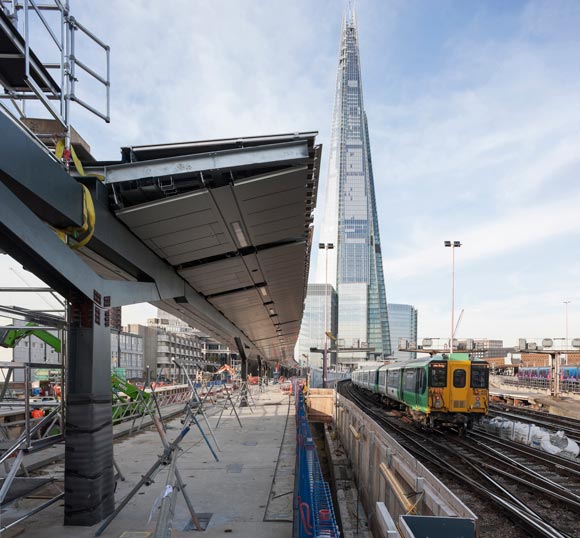 London Bridge station is being completely rebuilt in a rolling programme that allows it to remain open for business at all times. Martin Cooper reports on steelwork’s important role.

To cope with the increasing number of passengers the station is being redeveloped as part of the government sponsored £6.5bn Thameslink Programme. The work includes converting three of the nine terminating platforms to through platforms.

This – along with the installation of a new viaduct – will remove a notorious bottleneck to the west of the station. More trains will run with Tube-like frequency, every 2-3 minutes at peak times, through central London by 2018, while pressure on the Underground network will be eased.

All 15 platforms are being rebuilt to be covered by strikingly designed undulating canopies of steel and aluminium, incorporating clerestorey windows with north-facing glass that will let light flood the platforms and the new and larger concourse being built directly below at street level.

Dave Ward, Network Rail Route Managing Director, says: “This huge investment in rebuilding London Bridge station will transform rail travel for millions of people across London and the south east. By 2018, London Bridge will be the most modern station in Britain with more space, better connections and great facilities. 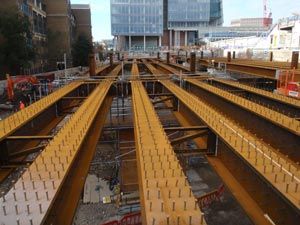 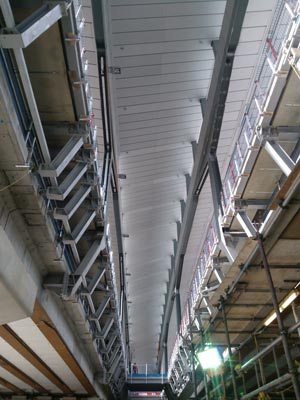 View of underside of bridge decks showing the mountings, known as the elephant’s ears, that support the platforms above. 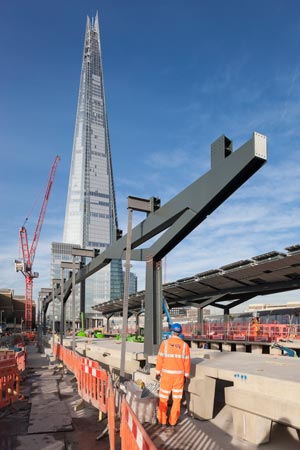 The canopy is supported by a series of Y-shaped columns

“Keeping London Bridge open for passengers while we rebuild it is a critical and challenging part of the Thameslink Programme. Construction goes on as much as possible behind the scenes without impacting on passengers. But there will be times each year between now and 2018 when services into the station will need to change.”

To keep passenger disruption to a minimum, the works are being undertaken in a sequential manner, with platforms being upgraded two at a time, thereby leaving the station with 13 ‘live’ platforms throughout the construction programme.

So far the project team has completed platforms 15 and 14, which re-opened to the public at the end of March. Work is now progressing towards the completion of platforms 13 and 12, which should be ready in June.

Central to the project is the creation of the new concourse that requires some of the Victorian arches on which London Bridge station is founded to be demolished. They are being replaced with new steel bridge decks to support the platforms and rail tracks. This will create a new ground level concourse that will be larger than the pitch at Wembley Stadium and will provide more space and easier connections to rail services located above.

Typically the programme follows a routine schedule with demolition work leading the way. Once the arches supporting two platforms have been removed, groundworks for the new concourse will start, allowing steelwork contractor Cleveland Bridge to begin erecting new bridge decks to replace the arches.

“In total we will erect 29 bridge decks (spans) during a number of sequential visits, adding up to about 4,000t, with the last ones erected in early 2017,” explains Ben Binden, Cleveland Bridge Project Manager. “Each of the visits requires us to erect either three or four decks depending on their position, and having completed the work for platforms 14/15 and 12/13 we’ve installed seven decks so far.”

“There is very little room on site, so once a pair of fully welded girders arrive on site they are lifted into place immediately,” says Mr Binden. “We erect the three or four spans in one eight to 14 day programme and then leave site and wait to be called back when the overall construction schedule has moved onto the next set of arches.”

Once the bridge beams and bracing are in place, main contractor Costain casts the decks, encasing the beams but leaving the bottom flange exposed. The decks then form the slab supporting the new tracks and precast platform units, while the bottom flange, which is weathering steel, is covered with cedar cladding as part of the concourse roof.

“Weathering steel was chosen for the bottom flanges because it won’t need to be painted in the future,” explains Peter Anstock, Structural Lead for Hyder WSP. “This cuts down on maintenance work and the future need to close areas of the concourse for repainting works.”

Steel is also playing a leading role on top of the bridge decks where Severfield-Watson Structures is delivering a further 3,000t of steelwork.

“Our steel erection programme begins with a connection to Cleveland’s bridge decks,” explains Nick Scott, Severfield-Watson Structures Contracts Manager. “This steel, that we call the ‘elephant’s ears’, supports a steel plinth that acts as a mounting for the precast platform units and the canopy columns.”

Once the precast platform units have been installed, which is also part of Severfield-Watson’s remit, the company then has to erect a series of 3.8m high Y-shaped columns spaced at 15m centres. The columns are connected via spine beams that help support a series of prefabricated steel cassettes (see box below), that in turn form the station’s feature curving canopy as well as accommodating services.

In order to ensure the erection programme ran as smoothly as possible Severfield-Watson has undertaken a trial assembly of a 54m long canopy prior to starting work on site.

“Future maintenance of the canopy could have been an issue for the client, the trial assured Network Rail that they could easily gain access to the services once the project was completed,” adds John Parker, Senior Technical Director for Hyder WSP.

The redevelopment of London Bridge station will complete the wider London Bridge Quarter scheme, a high profile project that also includes The Shard, The Place and a new bus station.

In total 1,200 prefabricated steel cassettes will be installed by Severfield-Watson, with each one a bespoke unit due to the changing rooftop geometry.

They are 9m deep by 3m wide and fabricated from galvanized I-section rafters. Once they have been assembled at Severfield-Watson’s Bolton factory the project’s M&E contractor installs the services and the cladding contractor, using Kalzip roofing, forms the cassette’s individual canopy roof.

The completed cassettes are then delivered to site in loads of up to three units per truck and because they only weigh 2.5t each they are lifted into place by one of the site’s tower cranes.

Severfield-Watson is producing about 10 of these units every week and Network Rail estimates that the prefabricated cassettes are saving weeks off the programme, as less on-site work is required. 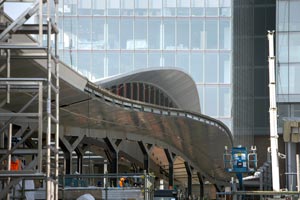 Tata Steel’s Kalzip is a leading standing seam roofing and wall cladding system, and over 80M square metres have been installed worldwide.

The product is suitable for both warm and cold constructions of any shape including curved, tapered and any pitch from 1.5 degrees upwards.

The product’s low weight, durability, speed of construction and adaptability make it equally suitable for new build or refurbishment projects.

A Kalzip roof can be anything from a single skin solution to a sophisticated high performance system that incorporates integral components and accessories.