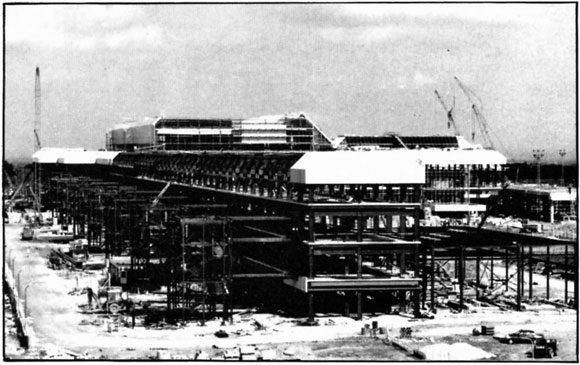 Manchester Airport’s Terminal 2 is now halfway through its 40 month construction period. The photograph shows the pier and terminal building from the East, with the stand access towers on the left and the combined heat and power plant taking shape on the right. On the far right is the 17 span elevated roadway. The main mechanical plant room is prominent above the main building and to the right the glazing is proceeding above the concourse area. AMEC Projects are management contractors for phase one of the £520 million Terminal 2 development.

The ceremony marked the halfway stage of the construction programme which began in May 1990. The steelwork contract was awarded to William Hare of Bolton and the management contractors, AMEC Projects, are now reporting that final completion remains on schedule.

William Hare also co-ordinated the installation by subcontractors Quikspan of the building composite floor decking. The first phase consisted of the structural steel frame of the terminal which is 140m long x 120m wide and the 612m long attached pier along its face.

The steelwork, consisting of approximately 10,000 tonnes of grade 50 steel in some 17,000 individual pieces, was designed and developed concurrently with the detailing and fabrication and thus required very close co-ordination by AMEC Projects between the structural engineers Scott Wilson Kirkpatrick and the fabricator to minimise delays to the following trades.

The terminal building has two distinct types of roof construction. One configuration comprises lattice girders supporting a conventional three layers felt roof. The lattice girders are fabricated from a rectangular and circular hollow sections. The second is a pre-fabricated space fame system supplied by Space Decks Ltd. The space frame modules will support a roof glazing system to the check-in concourse areas of the building, which has been designed to make the most of natural daylight.

The roof decking to the terminal building is also complete and works are currently progressing to the east and west piers. The erection of precast wall panels, curtain walling, cladding and roof glazing is well advanced, following which the building will be weathertight.

Externally, the 17 span 340 metre long elevated roadway to the departures level is well underway and work has recently begun on the permanent road to the Terminal 2 complex which will progress concurrently with the new M56 motorway bridge and link roads.

Terminal 2 is scheduled for completion in December 1992 and will open to the public in Spring 1993.