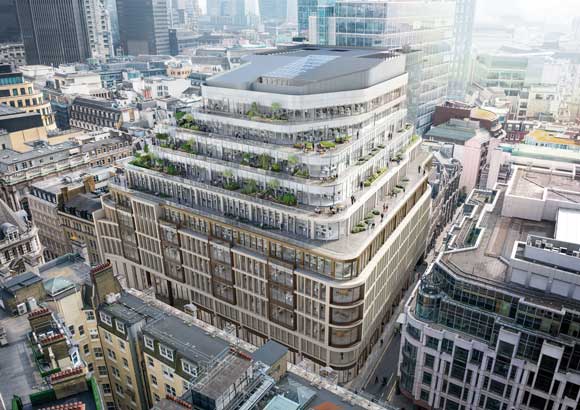 Terraces have been added to the building

A complex project that has included a partial demolition programme, strengthening of existing steelwork and the addition of new upper floors has extensively refurbished and reinvented an outdated steel-framed office block in the City of London.

Each building has to be looked at individually and each option will have its own particular merits, although demolishing a high-rise building in a crowded city centre can be highly challenging.

To reuse an existing structure’s fabric and foundations, reconfigure the building’s internal layout, and in some cases, add extra floors, is a design solution many developers are opting for in order to create cost-effective, modern, efficient and high-quality work spaces.

This is the design option taken at 60 London Wall, where a 1990s steel-framed office building in the heart of the square mile is being extensively refurbished and reconfigured.

“Re-using and adapting the existing steel frame reduced the carbon footprint of the building, effectively saving the energy embodied in the existing fabric.” 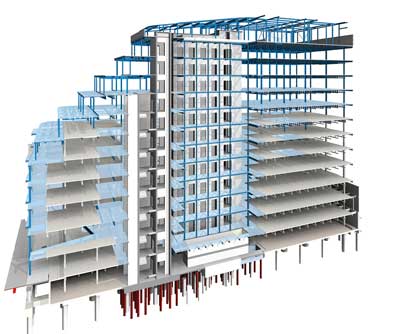 New steelwork (blue) has been added to the existing steel frame 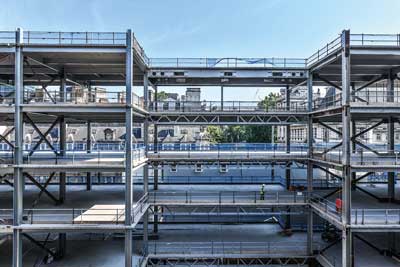 New floorplates have been created by infilling atria 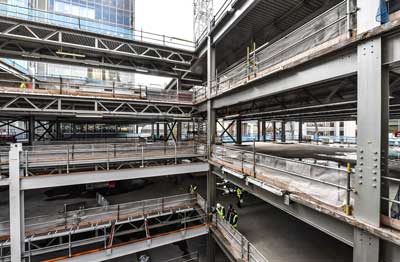 The new central atrium will have a glazed roof

The building’s fabric has been stripped back to its original steel frame, the cores have been removed, perimeter steelwork and slab around two elevations replaced for a new façade, and new floors added to the top of the structure, all of which has increased the overall floor space by more than 50%.

“The original building was a seven-storey office block with ground floor retail and a basement. We have removed the uppermost floor, as it didn’t fit our new design, and then added five new levels increasing the structure to 11-storeys,” explains Skanska Project Director Tony Boorer.

Main contractor Skanska began on-site during August 2017 and although much of the original building has been retained, the initial works included a large-scale reworking of the structure, which required a year-long demolition and enabling works programme.

Large amounts of temporary supports had to be installed to allow the removal of the four original concrete cores – one in each corner of the building. These areas were then subsequently infilled with new steelwork and metal deck flooring. Another central area of the building was then demolished in order to create space for a new stability-giving concrete core.

A 3m-wide section of the perimeter slab was also removed along the London Wall and Copthall Avenue elevations, to facilitate the installation of a new façade.

The design for the new scheme has maintained the original 7.5m × 7.5m column spacings, but along these elevations a much smaller 3m perimeter column spacing was originally in place to match the cladding system.

Perimeter columns that were on grid were retained and strengthened, while those that were deemed to be off grid, and would have disrupted the visual aspect of the project, where removed.

The original building had three atria, one has been infilled to create more floor space, while the other two have been reconfigured to create one new larger atrium in the centre of the building. This atrium has a glazed roof to allow natural light to penetrate the inner parts of the structure. Cantilevering breakout spaces, that are positioned at various points within the void, will give the space some architectural interest.

By opting to reuse as much of the existing steel frame as possible, a number of the original columns and beams had to be surveyed in order to determine whether they could carry the additional loads from the new floors.

“Only 60 of the existing columns, which equates to about 10%, needed to be strengthened to carry the additional loads,” explains Heyne Tillett Steel (HTS) Engineer Jimmy Reading.

“While below ground, our investigations and detailed analysis helped us increase the allowable load capacity of the existing piles. The only area of the project that required new piles was for the new core.”

Most of the steelwork, new and existing, will be left exposed within the new scheme, giving the office floors a modern industrial look. The old building’s steelwork was encased in concrete and this had to be broken out in order to shot blast, prime and then apply a high-spec paint to the existing steelwork.

Because the steelwork will be exposed and on show in the final scheme, all of the strengthening work needed to be done with the upmost care and diligence.

Mr Boorer says: “Initially, the design for the building did not include exposed internal steelwork and so the columns that needed strengthening would have had extra plates welded between the flanges of the UC column, effectively turning a traditional column into a box section, which would have been easier to plasterboard over.

“Once the design changed, we decided to weld strengthening plates to the outside of the flanges, thereby keeping the column’s original shape, which is a better option for steelwork that will be on show.”

The majority of the reconfigured floors offer approximately 4,000m² of office space, however this decreases slightly floor-by-floor, as there are roof terraces from level six upwards along two elevations.

The new upper floors all have large landscaped outdoor terraces that are up to 10m-deep in places. Steelwork contractor Severfield had to install a series of large transfer beams, up to 10t in weight, in order to create the structural frame’s steps and the subsequent change in column positions.

On top of the uppermost office floor, Severfield has also erected a large plant deck.

In summary, Severfield Project Manager David McGurk says: “Tying into an existing steel frame meant a substantial amount of new connections were required on site (either drilled or welded) to support the new framing.

“To get this right meant a heavy reliance on extensive site surveys and photographic information fed back to our drawing office, so that connections could be designed to adapt to the pre-existing steel framing.

“With that in mind, tying into the existing, 30-year old and partially demolished, steel frame meant that existing levels sometimes didn’t marry up with new theoretical floor levels. The resolution to these issues required extensive collective input from Skanska, HTS, EPR Architects and ourselves to ensure the project was delivered on time and to the required specification.”