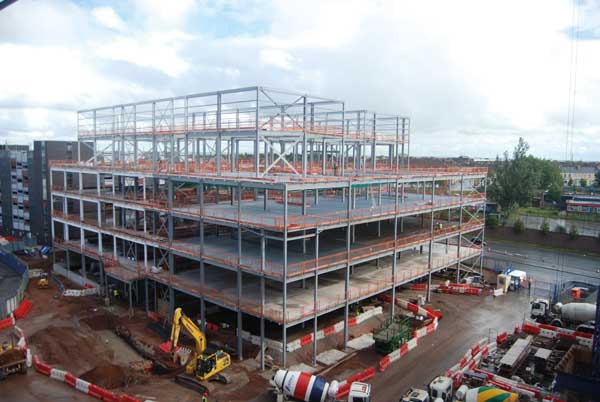 The CSSB takes shape quickly with the aid of steel construction

Structural steelwork is playing a crucial role in the redevelopment of one of the largest hospitals in the north of England.

Being built on land adjacent to the existing hospital, this multi-million pound project is vital in regenerating and transforming an area that acts as a gateway into Liverpool city centre.

Overall the project has been divided into three phases; the first and current phase includes the building of a new Acute Hospital building, a separate Clinical Services Support Building (CSSB) and two link bridges, one spanning between the Acute and CSSB and the other linking the CSSB to an existing multi-storey car park.

The new buildings are scheduled to be complete by early 2017. Phase two will then kick off with the hospital decamping its services into the completed new structures, allowing demolition of the existing 1960s hospital to commence.

Once demolition has been carried out, phase three will begin and this consists of constructing a large steel-framed public realm and car park (see box).

A hybrid design has been chosen for the first phase of the redevelopment. The new Acute Hospital building is being constructed with an insitu concrete frame, although there are a number of internal steel elements within this 150m-long structure, as plant enclosures, screens and one internal atrium are created using structural steelwork.

The largest steel element of phase one is the five-storey CSSB and its two link bridges, a contract that has required Elland Steel Structures to fabricate, supply and erect more than 900t of structural steelwork.

“Trust requirements had to be adhered to when choosing which material to use, but after an appraisal steel was opted for on the CSSB because of its speed and quality of construction,” says Carillion Project Manager Stuart Loftus. 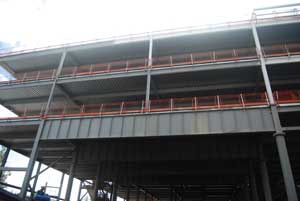 One of the 20m-long service yard girders 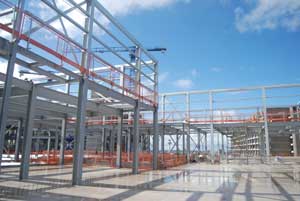 The CSSB will accommodate storage facilities for medical supplies, laboratories and offices. It is also the hub for many of the vital services that power the main hospital. Many of the power duct routes from the onsite energy centre go into the CSSBs own substation and then onwards into the Acute Hospital building.

The CSSB has a footprint measuring 60m × 40m and the steelwork has ben erected around a regular 9.9m × 6.6m grid pattern.

Two structural steel masonry lined cores provide the majority of the steelwork’s stability, along with bracing. The main core was installed as part of the first steel erection phase, as this then provided the steel erectors with sufficient temporary stability which all other areas of the structure could be erected from. Five phases, working to the full height of the building were needed to complete the structure.

A large part of the ground floor of the CSSB incorporates a double height service yard. This part of the erection programme involved the project’s heaviest steel members.

Elland Steel Structures used a variety of different mobile cranes for the job. The biggest capacity crane was a 100t unit used to lift four 2m-deep girders, spanning 20m and each weighing 17t, that form the yard’s open plan space.

A series of 10m-high, 559mm diameter CHS sections, with 25mm thick walls, support the girders. Once each CHS section was installed, Carillion had to concrete fill each member to add to the overall robustness of the column supports.

Level two of the CSSB wraps around the loading yard, and so the first floorplate to cover the entire footprint is level three. This floor accommodates laboratories and the connections to the two link bridges (see box).

Level four is more or less identical to level three, while five steps back and only occupies half of the CSSB’s footprint.

“We’ve added some flexibility into the structure as extra steelwork could be added in the future to complete level five if the hospital wants to expand the building,” says Mr Loftus.

The entire project (including phase three) is due to be complete by 2020. 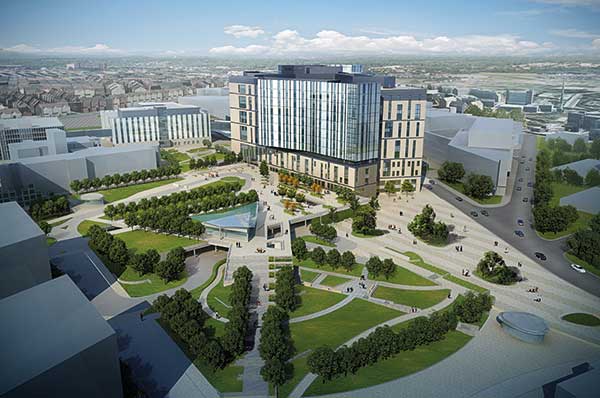 Once the existing hospital has been demolished a steel-framed podium, accommodating a ground level car park with a public realm above will occupy the large cleared space.

Founded on pad foundations, the steel podium will measure 110m-long × 90m-wide, with a series of 305 UC columns erected around a 7.5m × 7.8m grid pattern. This column spacing, with a floor-to-ceiling height of 4.5m is considered to be ideal and the most efficient for the car park.

Spanning the columns, a series of 610 UBs supporting precast planks will form the roof.

“The steelwork has been designed around the heavy loadings generated by the podium’s deep landscaping build-up,” explains TPS Structural Engineer Duncan Gray.

The public realm on top of the podium will be formed with a 700mm fill within which there will be numerous plants and trees, many of which will be in large planters.

Paths, leading to and from the surrounding buildings, will crisscross the realm and public access will be via a flight of stairs. Because of the site’s sloping topography, the CSSB will overlook the realm and will be linked to it via a ramp.

Gardens will provide solitude and a relaxing environment, while a café situated in the middle of the realm will offer drinks and snacks.

Elland Steel Structures will erect approximately 700t of galvanized steelwork for this phase, with work due to begin in 2019. 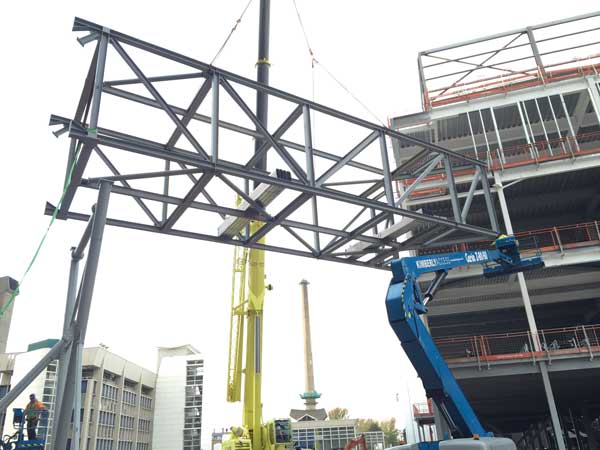 Connecting the CSSB to the Acute Hospital is a 42.7m-long x 5.7m wide steel link bridge. The structure is supported by a single 10m-high V-shaped column, positioned slightly of-centre due to a service road that runs beneath the bridge.

The steelwork for this bridge was brought to site in individual sections, which were then assembled on site using temporary support frames to minimize crane requirements.

Also on level three, linking the CSSB to the adjacent multi-storey car park, is another 21m-long bridge.