The 1970s-built six-storey concrete-framed building is getting a complete makeover, with an extensive refurbishment that will deliver 157,000ft² of open-plan office space within a new expanded structural envelope.

The area around Old Street is becoming renowned as a location for media and digital companies, and in keeping with the new building’s expected tenants’ preference, exposed soffits as well as limited internal finishes throughout will create a modern industrial warehouse environment.

Although the original structure is concrete, it is a steel solution which is playing the leading role in the refurbishment to minimise weight and loads. Extra steel-framed floors have been added to the Old Street elevation, increasing this side of the building to nine floors. Meanwhile two floors have also been added along the Bunhill Row elevation, increasing this part of the scheme to seven floors.

Another steel floor has also been added to the Banner Street elevation, while internally, a new four-storey steel element takes up approximately one-third of the inner space by replacing a 1980s concrete addition that has been demolished.

“Using a lightweight composite solution of structural steelwork supporting metal decking to form the new upper floors, and the new internal zone, has meant there has been little or no strengthening works necessary to the foundations or existing concrete columns,” says Heyne Tillett Steel (HTS) Project Engineer Krzysztof Marcinkiewicz. 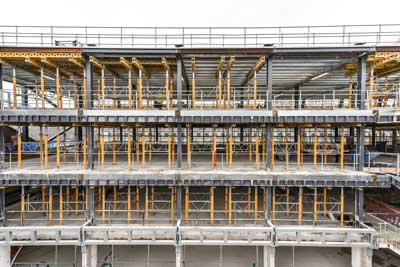 Steelwork is providing the building with new internal floors 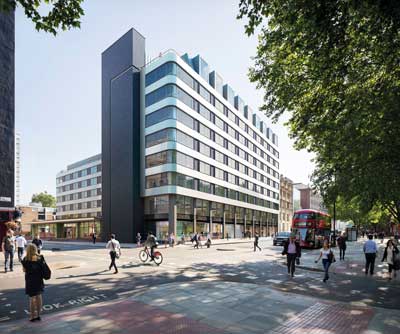 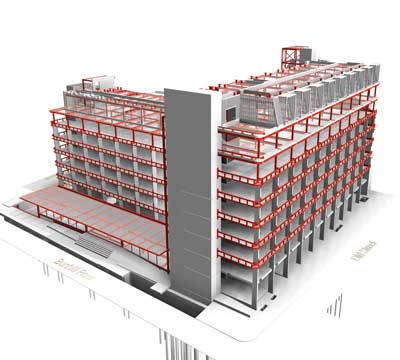 Wates started its programme last February, while the main demolition was still ongoing. As well as dismantling internal areas of the existing structure, the demolition also included stripping back all of the elevations to reveal the original frame.

“One of the first steelwork erection parts of the job was the new floor added to the top of the Banner Street elevation,” says Wates Project Manager Mark Tulk. “Logistically it was fairly easy as it was just a single floor, however there were quite a few steel-to-concrete connections and these were a challenge.”

As the majority of the new steelwork is connected to the original concrete frame, HTS had to investigate the project’s original designs to find out where rebar was located, so the appropriate connection brackets could be designed.

“We designed brackets that had a number of spare holes, so when it came to Bourne Steel connecting them to the concrete they had enough options for their bolts to avoid hitting rebar,” says Mr Marcinkiewicz.

Bourne Steel had to design the numerous steel-to-steel connections, as well as fabricate, supply and importantly erect the steelwork.

The rooftop extensions, as well as the internal steel additions, are all erected around a 5m × 7.5m grid pattern. This mostly corresponds with the existing frame and so one new column sits atop a concrete column, taking the loads directly down to an individual pile.

The exception to the column-on-column design is the new 20m × 15m four-storey internal addition. This steel frame sits on a retained podium slab which spans the building’s former basement car park.

“The podium has transfer beams within its structure and these support the desired steelwork grid we wanted,” adds Mr Marcinkiewicz.

Elsewhere some of this podium has been demolished to open up the basement to create two internal courtyards. They will allow natural light to penetrate two new lower office levels created by adding a mezzanine in the basement.

Much of Bourne Steel’s erection programme has been done using the site’s two tower cranes. However, there are some areas within the project where the cranes cannot deliver materials due to the existing structure being in the way.

One such area is on the western end of the Old Street elevation and involves the new three-storey extension. As the existing stability system, which is based around cores, was deemed to be insufficient for this steel extension, a new series of cross bracings has been added in one bay per floor to the full height of the building.

“The bracing is formed by two columns and two beams bolted into the existing concrete bay, and then strengthened by a cross bracing in the middle,” says Bourne Steel Site Manager Steve Condon.

“However, there was no way they could be erected with the tower crane because of obstructions, so they were placed into a central area within the building and then manoeuvred and erected using a telehandler and manual hoists.”

One of the client’s desires for the new scheme was to increase the available office floorspace. This has been achieved with the new steel floors, basement mezzanines and internal additions.

However, to further increase the floorspace, a series of steel Vierendeel trusses, bolted to the existing concrete-framed elevations has allowed these floors to be extended by 400mm.

The trusses, which are 5m long and 1m-high, formed by 150mm × 150mm box sections, fit into individual bays. The internal void is in-filled with plywood decking to form the floor extension, while externally the trusses support the building’s cladding.

“For the areas built with new steelwork we were able to form cantilevers to create the exact same elevation profile,” says Mr Marcinkiewicz.

Elsewhere the steel programme has included Bourne installing new lift shafts and risers, and internal supporting beams for the existing frame where areas have been demolished.

“Logistics have been a challenge on this project as with most city centre jobs that involve a tight and confined site with little or no room to store materials,” sums up Mr Tulk.

“This job is no different and the steelwork had to delivered and then erected on a just-in-time basis.”

Most steel deliveries were made via Bunhill Row as this road is not as busy as Old Street. Consequently, the last steel pieces to be erected were a two-storey (basement and first floor) pavilion that will house the main entrance and a coffee shop.