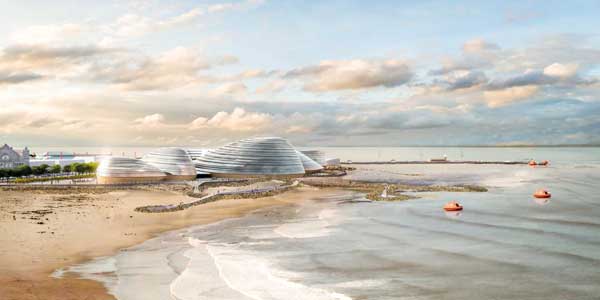 Plans have been submitted to Lancaster City Council for an £85M Eden Project to be built on Morecambe Bay.

It is proposed that the destination will combine indoor and outdoor experiences, connecting people with the internationally significant natural environment of Morecambe Bay while also enhancing well-being.

Housed in five large domes that would reach a height of 37.3m, the project will reflect Morecambe’s rich heritage, offering a vision of a seaside resort for the 21st Century including re-imagined lidos, gardens, performance spaces, immersive experiences and observatories.

Eden Project North would also have a 4,000-capacity outdoor arena designed for live music and entertainment.

David Harland, Chief Executive of Eden Project International Limited, said: “This is an important milestone for Eden Project North. Having a positive impact on the internationally significant environment of Morecambe Bay is fundamental to our vision for this project. This report is the next step towards making Eden Project North a reality.

“We have been overwhelmed by the support we have had from the local community and we look forward to working closely with everyone in the coming months and years as Eden Project North takes shape.”

The project is due to open in spring 2023, following a two-year construction period.