An exercise in steel 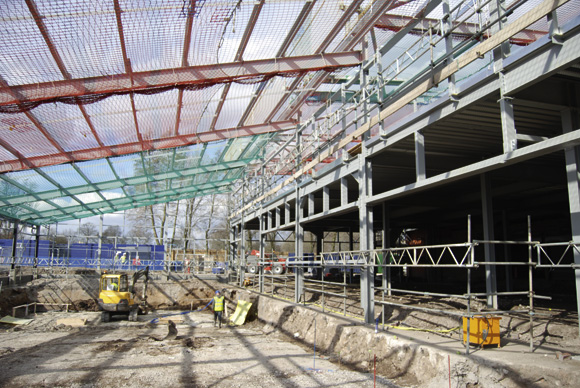 The pool was dug prior to the steelwork being erected

A new community leisure centre and swimming pool in St Helens, which incorporates a number of sustainable features, is making full use of steel’s speed and ease of construction.

Currently under construction on the site of the town’s former leisure centre, St Helens will soon have a new leisure facility containing a five-lane, 25m swimming pool, fitness suite, a community meeting room and a number of administrative offices.

Impression of the completed leisure centre including the refurbished retained hall 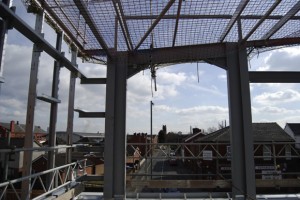 Blockwork cladding has required larger beams to be inserted 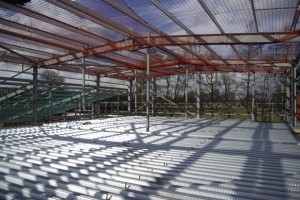 The upper level will house a dance studio and fitness suite 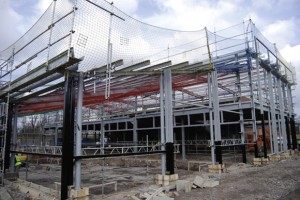 Originally known as Boundary Road Baths, the old centre was based around pool facilities which were built more than one hundred years ago. Due to the age and condition of the building it would have cost more to repair and maintain this structure than replace it with new facilities.

Taking up the majority of the site’s existing footprint, the new Queens Park Leisure Centre does however incorporate a retained sports hall from the old centre, which is undergoing a comprehensive programme of refurbishment both internally and externally.  The new structure wraps around this older building on two elevations, and links into it along one facade.

Councillor Wally Ashcroft, Executive Member for Culture, Heritage and Sport said: “Queens Park will provide a valuable new sporting facility underpinning the Council’s ‘Active St Helens Strategy’. It will make a significant contribution towards getting more people active, improving their health and the well being of the wider community.

”Craig Tatton, Managing Director of ISG’s regional business, agrees: “The replacement or modernisation of costly and ageing leisure amenities is a key issue for many local authorities across the UK and this situation will become exacerbated as more facilities become unfit for purpose. Direct replacement, such as the Queens Park scheme, is a compelling argument as the community benefits from new purpose-built amenities, with dramatically reduced running costs thanks to vastly improved heating and lighting efficiencies.”

As well as demolition, early works in the construction programme also included the installation of some 200 x 4.5m deep stone columns. The majority of these are located beneath the new swimming pool, which was excavated prior to the steel frame being erected.

Early in the design process for the new centre, a steel frame was chosen primarily for its speed and ease of construction. Although there were other considerations, such as the shape of the new structure, which incorporates a number of disparate elements such as a single and two storey section as well as a lean-to roof.

Steelwork erection was completed by EvadX during a three week programme, with a further one week needed to install metal decking as part of a composite steel/insitu concrete upper floor construction.

“Steel was also chosen because it is more versatile, particularly on a structure like the new centre which is not a regular shape,” says Chris Sage, Farebrothers’ Project Engineer.

The two storey part of the new centre abuts the retained sports hall and consists of changing rooms and administrative offices on the ground floor, while upstairs there is a dance studio with sprung timber flooring, and a fitness centre boasting the latest cardiovascular and free weights training equipment.

Adjoining the two-storey area the swimming pool is housed in a single storey structure with a lean-to roof. Forming the long spans are a series of 13m-long rafters which will remain exposed, as an architectural feature, along with the associated ductwork.

Another similar situation occurs at the meeting point of the pool area and the two-storey sector. This elevation comprises of either glazed screens to the viewing / cafeteria area or continuous openings into the pool changing areas at ground floor level. Internal partitions are predominantly built with blockwork, some of which is supported via flange plates attached to the undersides of steel beams in order to provide limited visibility of the supporting element.

Sustainability is also playing a key role in this project, and a number of environmental features have been included in the design including a combined heat and power unit, a passive ventilation system and energy efficient lighting throughout. Biodiversity will be encouraged across the site with significant landscaping and thoughtful planting designs as well as the installation of numerous bat boxes.

“Much of the material from the demolition process has been reused for landscaping mounds,” comments ISG Senior Construction Manager Tony Dougan. This limited the amount of material leaving the site and lessened the project’s impact on the surrounding community as there were fewer truck movements.

“The majority of the material being used for the new building is recylced including the glass and the aluminium for the cladding,” adds Mr Dougan. “And of course the steelwork is 100% recyclable.

”The project is scheduled for completion by October 2010.