All change at Cheapside 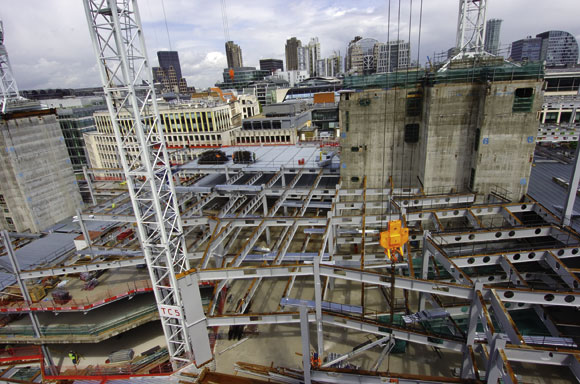 Plans are afoot to return one of London’s oldest thoroughfares into a retail destination. Martin Cooper reports from One New Change, a new landmark retail and commercial development which forms a central element of this grand scheme.

Cheapside was historically the City of London’s high street, a bustling and congested road which Charles Dickens described in his 1879 Dictionary of London as ‘the busiest thoroughfare in the world.’

Although that description does not quite ring true today, the road has remained one of the major routes linking the City with London’s East End and the shopping districts of the West End. Commercial developments have replaced shops along much of its length as a major rebuilding programme took place after the Second World War, as Cheapside was extensively damaged during the Blitz.

However, changes are afoot along Cheapside again, as the City of London’s planning policies from the beginning of the millennium have set about revitalising the whole area. Known as the Cheapside Retail Initiative, the plan is to create a new retail area in the City of London, something it lacks at present, and the construction of One New Change is at the heart of this scheme.

Located opposite St Paul’s Cathedral at the western end of Cheapside, One New Change will offer 20,438m² of retail space over three floors (housing 70 retail units) as well as 31,587m² of office space. The project will have three retail levels: lower ground, ground and first floor. Lower down there are two basement levels predominantly for goods in, while the upper levels of the building – reaching a maximum of six floors – are taken up with office space. 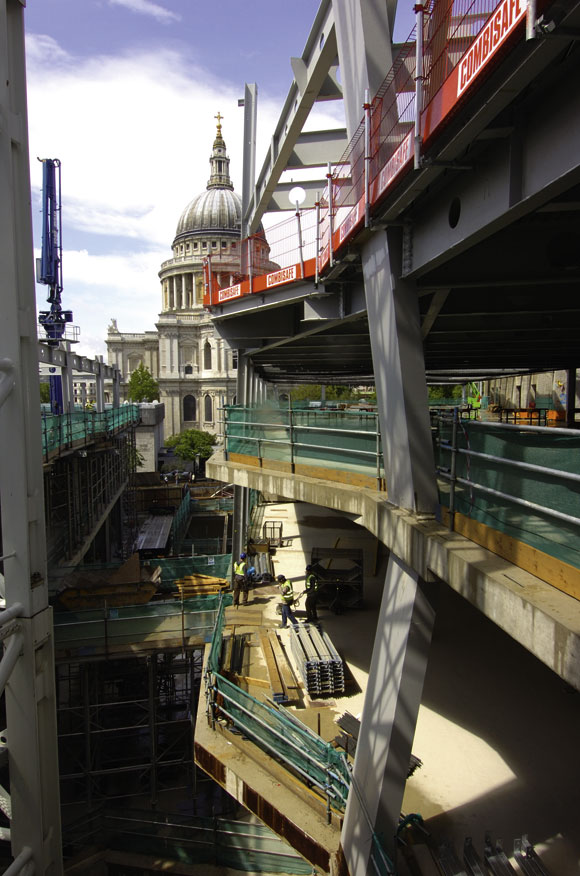 As well as offering a seven days a week shopping destination in the heart of the City, there will also be a pubic open space on the roof, which will open up new views of St Paul’s, making the building a new photo-stop along the capital’s key tourist route.

Constructing a new landmark structure on such a prestigious site called for a bold statement. Developer Land Securities commissioned leading French architect Jean Nouvel to design a building that respects its historical setting.

He has designed what has been described as a modernist masterpiece in a setting steeped in centuries of London life. The structure’s matt fitted glass exterior echoes the surrounding Portland stone and brick facades. While new pathways, which cut across the building at ground floor level, resurrect centuries old pedestrian routes, re-establishing an axis linking Cheapside with Watling Street and Bread Street with New Change.

The building is aligned towards St Paul’s and a large atrium opens out from the heart of the structure, offering views of the cathedral from deep inside the structure. Lifts and reception areas, located at the end of the atrium will also have direct views across New Change to London’s most famous landmark.

Sight lines have also played an important part in the design, as the southwestern corner of the building – nearest to St Paul’s – has only four storeys, compared to the rest of the structure which extends up to sixth floor level.

A sloping roof as well as sloping elevations are two of the most eye-catching elements. “The design is quite uncomplicated with the exception of the elevations which feature a number of sloping columns,” comments James Bown, Arup’s Project Engineer.

“There are some severe restraint forces, but this has been overcome by using direct lines in the primary steelwork to transfer the forces into one of the building’s cores.”

The sloping elevations and the consequent interaction between the structural steelwork and cladding has also been a challenging aspect of the project.

Steelwork contractor Rowen Structures has worked closely with the main cladding contractor Gartner, checking coordinates and agreeing parameters by swapping structural models. “This made the process a lot easier as we were then able to design the necessary bracket and their position,” explains Rowen Structures’ Project Manager Andrew Henstock. 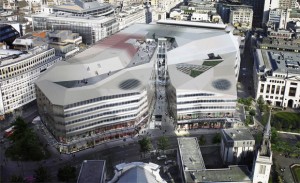 The south western corner of the project has four floors, while the rest of the building rises to six levels to give better views of St Paul’s Cathedral 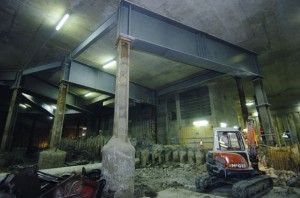 The early construction programme for this landmark building has taken on an intriguing format with a top down method being employed. This was seen as the best way to maximise a rather tight programme and ensure the project is ready for its 2010 completion date.

Following on from the demolition of the site’s old office development, owned by the Bank of England, more than 100 x 17.5m-long plunge columns were installed. Once the piling was done the project’s lower ground floor slab was cast on top of the plunge columns, allowing two basement levels to be dug out below the slab while construction of the upper floors was able to begin above this floor.

“This was the only way to achieve the top-down method and maximise the programme duration,” explains Bovis Lend Lease Package Manager Daire Hughes.

All of the plunge columns were supplied by steelwork contractor Rowen Structures and Mr Henstock estimates it has supplied 650t of steel below ground and a further 5,500t above ground.

The plunge columns are arranged in a 9m x 9m grid which corresponds with the steelwork grid pattern above. Steel columns have been connected to the top of the plunge columns which affectively means the project’s steel skeleton extends from roof top to below ground level.

As the lower two basement levels will house a large delivery yard, big enough to accommodate articulated trucks, a two-way ramp from street level is being formed with a number of large transfer structures. These large steel sections are required to transfer the loads from above, as a column grid line is missed out in the basement as the ramp can not have columns going through the middle of it.

The transfer structures are typically 23m long x 2m deep and the heaviest is 55t. They have been fabricated at Severfield-Rowen’s Dalton facility and brought to site in one piece for ease of erection. These large steel sections were all too heavy to be lifted into position by any of the site’s tower cranes, so seven weekend road closures have been necessary to accommodate large mobile cranes to complete this lifting procedure.

The site is surrounded by roads and the project’s entire footprint is taken up by the new building. This means the only viable place to locate a mobile crane is in the road. This has worked well except for one transfer structure which had to be positioned near the site boundary along Bread Street.

“This street is narrow and the biggest crane we could get in was a 200t capacity unit,” explains Mr Henstock. “As we’ve typically used 500t cranes for these lifts, this meant the transfer structure had to be spliced because at 19t total weight it was too heavy for the crane.” 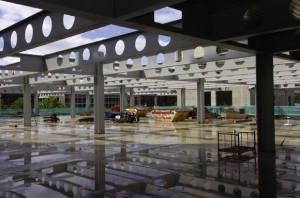 Cellular beams have been used for all office levels

The three retail floors of the project have been constructed with concrete. However, from the second floor slab upwards the building is all steel, making use of Fabsec beams for all levels alongside the steel columns.

“Fabsec beams have been used for their efficiency as they allow the services to run within the structural void,” points out Mr Bown.

The steelwork erection programme has called for a lot of sequencing between the various trades. The project has been divided into four main zones, corresponding to the number of cores. As concrete is being laid on one zone steel is being erected elsewhere, in readiness for the metal decking. Once concrete is down there is usually a few days wait before Rowen’s cherrypickers can move in and begin further steel erection.

The steelwork is due to be completed this August and the entire project is expected to open in time for Xmas shopping in 2010.

Quoting Charles Dickens: “Cheapside remains now what it was five centuries ago, the greatest thoroughfare in the City of London. Other localities have had their day, have risen, become fashionable, and have sunk into obscurity and neglect, but Cheapside has maintained its place.”

The project team will agree with that, as One New Change is set to breathe new life into this historic street.