The Steel Construction Institute’s Director Dr Graham Owens marked his resignation after a 21-year career at the Institute, at the annual dinner held at the Landmark London Hotel in November. Guests heard Professor Patrick Dowling pay tribute to Dr Owens’ great contribution to the success of constructional steelwork in the UK while at the SCI and in his earlier academic career. 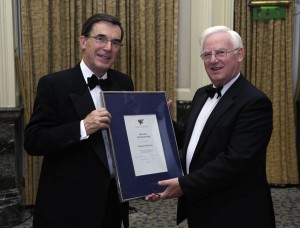 Professor Dowling said he was a gifted experimentalist who always produced even more data from his researches than had been hoped for. He achieved the rare distinction of being elected to the Royal Academy of Engineering on first application.

Earlier contributions to engineering included producing scale models of the Thames Barrier, a cutaway section of which is still on display. “I am delighted and proud of all of his achievements,” said Professor Dowling.

Dr Owens, who has been made the fifth Life Member of the SCI, said it had been a privilege to be involved with the SCI. “It has been a challenging experience and we have been incredibly successful,” he said. “We managed to make a real difference to the quality of steel design in construction.” Dr Owens thanked all those who had put their faith in the SCI, especially Corus.