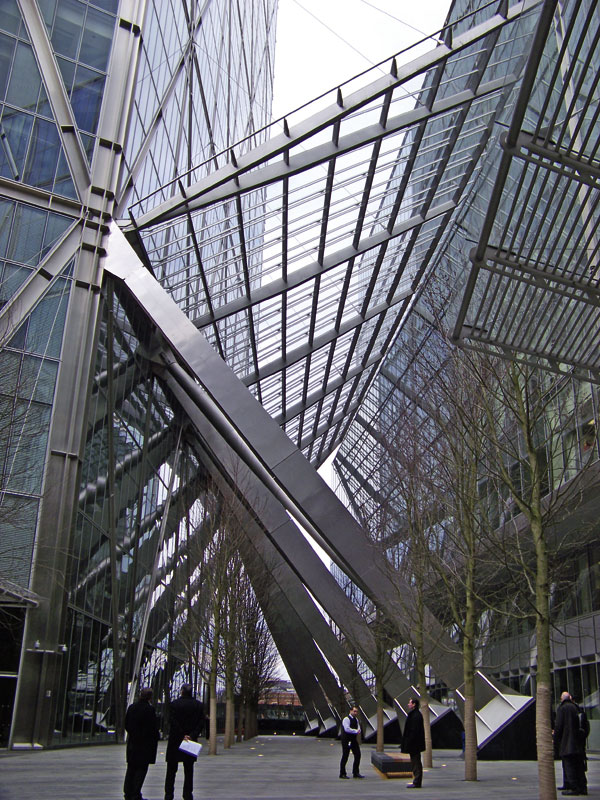 This City of London development consists of the 12-storey Bishopsgate building and the 35-storey Broadgate Tower, which together required more than 12,000t of structural steelwork.The project is located directly above busy railway lines and was only structurally possible after significant enabling works were completed to create a raft structure over these lines.

The project team made use of and modified a raft which was originally constructed for an earlier job which was shelved in the 1990s.In order to limit deflections and settlement it was necessary to distribute the resulting vertical forces from the two buildings evenly across the raft support. A series of raking A-frame legs effectively prop the structures at level 5 and transfer the loads to strategically located transfer beams and columns within the raft.

“The five-storey rakers provided a major challenge during the construction of the steelwork frame and an extensive arrangement of temporary props and trestles were required,” says Nick Day, William Hare’s London Director. “The operation included a sophisticated load transfer operation using a jacking system to transfer the loads from the temporary supports onto the main raking columns.” 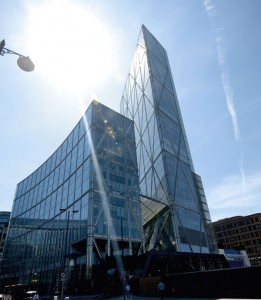 The Broadgate Tower is an elongated rhombus in shape and its lateral stability is provided by a perimeter diagrid bracing system. The diagrid nodes occur at six storey increments, with plan bracing and RC diaphragm floor plates distributing the horizontal loadings into the external bracing lines.

Wherever possible the main diagrid column and bracing connections were designed as a bolted joint, but in certain locations, it was necessary to site weld the joints. This detail required a robust temporary connection to be installed during erection in order that construction could continue above the splice location.

The 201 Bishopsgate structure is constructed with steel framed stability cores and long span cellular beams with nominal moment frames provided around the outside framing for enhanced stiffness.

“Both structures are technically sophisticated and include a number of innovations,” says Mr Day. “They have double-decker lifts and an efficient heating and cooling plant, which is expected to produce a lower level of emissions than required by current building regulations.”

The structural fire protection is provided by a combination of off-site applied intumescent paint and on-site installed fire boarding. At the tower roof level it was necessary to treat some external components with an epoxy-based intumescent to provide the necessary two hours rating, while others were concrete encased.

These landmark offices are prominent and prestigious, say the judges. A heroic solution, creating interesting space.