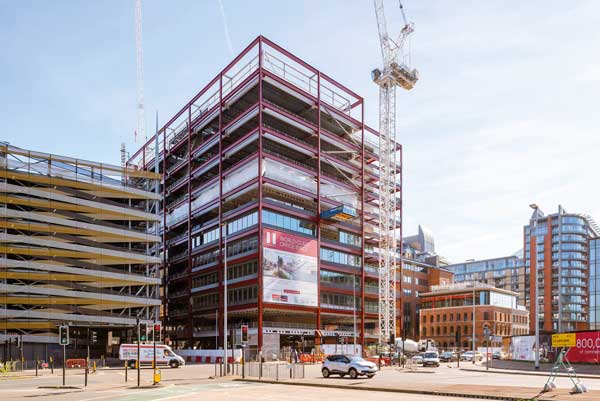 Steel-framed commercial buildings, each with their own individual design, are taking centre stage on a multi-million-pound development in Salford. Martin Cooper reports.

Located along the Salford side of the River Irwell, New Bailey, gets its name from the prison that stood on the site until being demolished in 1872.

Because of the plot’s historic significance, an extensive archaeological investigation was undertaken prior to the main construction works getting underway in 2014.

Phil Marsden, Project Manager at The English Cities Fund, said: “New Bailey and the wider Salford Central masterplan was brought forward to change what was being used as a surface car park, into a new, vibrant destination where people would want to live, work and relax. High-quality individuality in design, along with right mix of partners and a strong, progressive client in Salford City Council has enabled us to achieve just that.”

Bowmer + Kirkland is one of the main contractors for the scheme. Its work has so far included three steel-framed commercial blocks and a Premier Inn hotel. The latter structure was completed before the dig got underway as it sits slightly outside of the footprint of the former prison walls.

Of the office buildings, One New Bailey was completed in 2017 [with Billington Structures as steelwork contractor] and currently the firm is building units Two and Three [see box]. A fourth office building is also on the drawing board, as part of the masterplan. 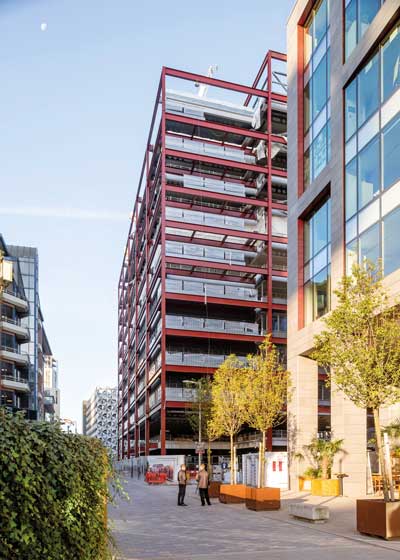 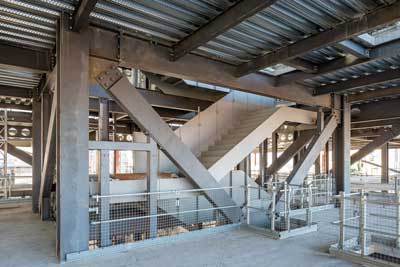 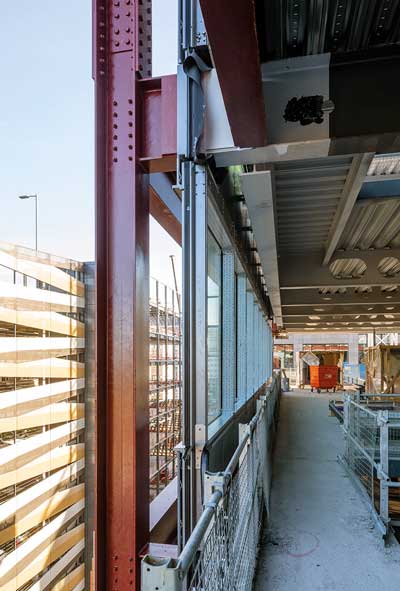 The glazed façade sits inside of the exoskeleton 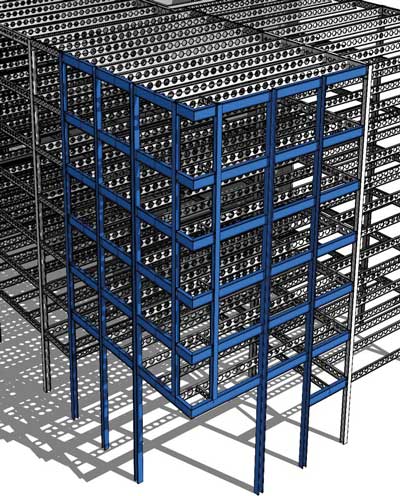 The steel frame has a cantilevering entrance

Meanwhile, a further part of the overall New Bailey scheme, currently consisting of three residential towers and another multi-storey car park is simultaneously being built by Morgan Sindall Construction.

“Every office block has a different design team, which gives the estate a unique selling point as the buildings have an individual look,” explains Bowmer + Kirkland Contracts Manager, Shaun Thomas.

Two New Bailey is an 11-storey office block, offering 17,300m² of floor space, a basement car park and is aiming to achieve a BREEAM ‘Excellent’ rating.

Contributing to the development’s individualistic feel, this building is a stand-out structure that boasts an external steel exo-skeleton, while internally, the majority of the steel frame will also be left exposed.

Explaining the exposed steelwork design choice, AHMM Senior Architect, Dan Farmer, says it is all about refining Salford’s industrial heritage and creating a 21st Century warehouse as an office space with character.

“The steel frame is the real driver for this project and having an exo-skeleton meant that we were able to highlight the steelwork and dispense with the usual clutter that surrounds many buildings.

Having so much exposed steelwork meant a lot of attention has been paid to the connection design and the paint specification. All of the steel frame’s bolts are countersunk as they were considered to have a more aesthetic look, while the majority of the steelwork will be repainted late in the programme to ensure it has the best possible finish.

The exo-skeleton is not just an architectural and aesthetic feature, the steel beams and columns around the perimeter are load-bearing and structurally-integral to the scheme.

Allowing the external steelwork to be even more of a stand-out feature, the internal floorplates and façade are set-back 800mm behind the skeleton.

Beams that penetrate the façade have a thermal break inserted into their length to negate any effects from the weather. The thermal breaks, which are bolted between two steel members and are hidden within the façade’s depth, arrived on site already installed within the steelwork as this process was undertaken by steelwork contractor Severfield during its fabrication programme.

Based around a 12m × 12m grid pattern, the building has minimal internal columns, allowing the office floorplates to have the desired long uninterrupted and flexible spans.

Fabsec beams, used to integrate the building’s services within their depth, support metal decked flooring. The underneath of the decking will be left exposed within the completed scheme, along with the services and duct work, adding to the overall industrial look.

Stability for the building is derived from a steel braced core. The decision to go for a steel core instead of a concrete one was all down to availability as Integra Consulting Engineers Director Rory Harris explains. “At the time, there were a number of concrete projects underway in the region and we thought there could be material availability issues, so we went with a steel core.

“It was a similar price in the end, but had the advantage of being erected along with the main steel frame.”

Two New Bailey is due to be completed in mid-2020. 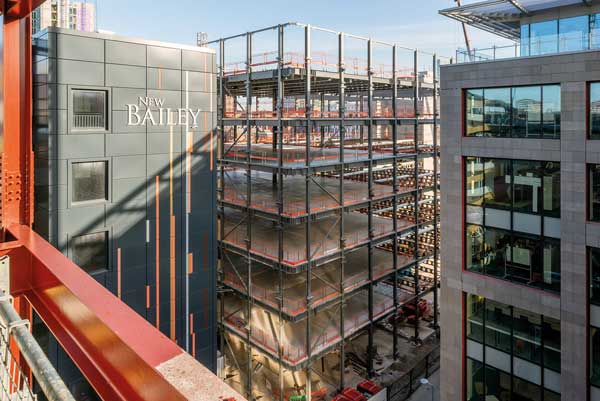 Third on the block

The BREEAM ‘Excellent’ rated office block is situated adjacent to Salford Central station and will have secure parking accommodated within disused railway arches. The entire building has been fully let to HM Revenue and Customs.

Although this building is not as tall as its neighbours, it is a long rectangular structure measuring almost 100m in length, which allows it to have significant floorplates.

“In the early design stages, we reviewed several options and a steel frame proved to be the most efficient way of achieving the long spans which were required to minimise the number of internal columns within the floorplate,” says Cundall Principal Engineer Clare Dawson.

To this end, the scheme contains only five centrally-positioned internal columns creating two 15m-wide spans that run the length of the building.

These two long spans are created with a series of Westok cellular beams that integrate all of the building’s services within their depth.

Stability for the frame is derived from reinforced concrete shear walls predominantly located around the stairs, lifts and risers within the central area of the building.

An interesting feature of the building is its 6m × 6m column-free corner zone that incorporates the ground floor entrance.

“To achieve this, we designed the structure above to act as a series of Vierendeel trusses at each floor level,” explains Ms Dawson.

“Meanwhile, the façade comprises precast masonry panel sections which connect together in sequence to create a weaving effect. Careful consideration had to be given to the connection details, sequencing of installation of the façade system and building movements due to temperature and lateral loading.”

The precast panels will attach to a series of brackets, which were welded to the perimeter beams by EvadX during the fabrication programme.

Three New Bailey is due to be complete by early 2021.