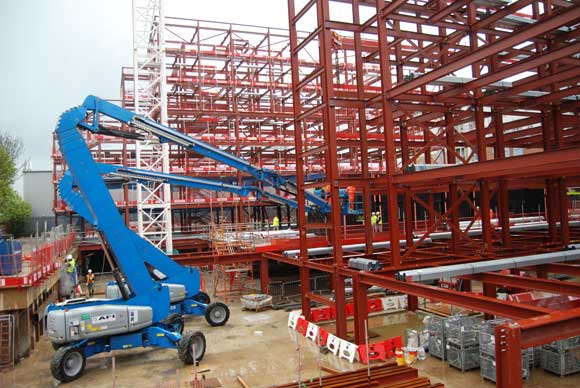 A steel-framed solution has ticked all of the boxes for the Metalworks residential scheme in Slough.

FACT FILE
The Metalworks, Slough
Main client: SevenCapital
Main contractor: Colmore Tang Construction
Structural engineer: CWA
Steelwork contractor: Mifflin Construction
Steel tonnage: 950tSecond only to London as a UK location for global corporate headquarters, the Berkshire town of Slough is a business and innovation hub, based around its proximity to Heathrow Airport and having a large workforce within its catchment area.

The town is also increasingly becoming a destination for people looking to move outside of the capital and it is listed in Knight Frank’s top 20 UK destinations for London leavers. The population is predicted to increase by an impressive 18,000 by 2021.

Commuters find Slough a convenient location as the town has good transport links, with half-hourly train services running to London Paddington station. These services will soon be complemented by the Crossrail Elizabeth line that will create direct, door-to-door connections between Slough and the West End of London, the City and Essex.

Slough’s attractiveness to residents is highlighted by the number of new residential schemes that are currently being built in the town. Many of these are close to the railway station and town centre, making them ideal for both people working in Slough and those wishing to commute.

An example is The Metalworks scheme, which is a stone’s throw from Slough station and is being constructed by Colmore Tang for SevenCapital.

Including ground floor, both blocks have seven-storeys above basement level and will contain a mixture of one, two and three bedroom apartments.

Steelwork starts at basement level as the subterranean level covers the majority of the site’s footprint. A podium deck covers the basement car park and supports the two residential blocks and a landscaped realm that separates the structures.

The podium is also a transfer deck, as the steelwork is based around a larger column spacing in the car park (spans of up to 10m) than the above residential areas, where spans are predominantly 6m and 8m long.

The project’s steelwork supports metal deck flooring throughout, as this was deemed to be the most efficient design as Colmore Tang Construction Contracts Manager David Scott explains: “Initially we were going to use precast planks for the floors, but this design would have needed many more crane lifts for the individual precast units.

“We may have slightly more steelwork in the frames to support the metal decking, but this solution has given us a quicker programme.”

Colmore Tang started work on this previously brownfield site during May 2018, initially demolishing existing buildings and then installing steel piles and excavating the basement. The slab was also cast in the basement prior to Mifflin Construction beginning the steel erection programme.

Using the site’s tower crane in combination with MEWPs, Mifflin estimates that it erected some 3,275 individual steel pieces for the scheme. The steelwork programme, which also included the procurement and installation of reinforced concrete staircases was completed this month (June).

“By choosing a steel-framed solution for the project we have the advantage of not just a quicker programme, but also a safer and easier solution,” adds Mr Scott. 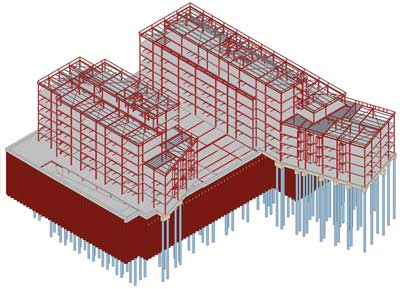 The Metalworks plot is a logistically challenging site, as it is hemmed in by existing residential buildings on three sides, with the fourth side offering the only access via Petersfield Avenue.

This thoroughfare is already quite busy, and the site team say a concrete-framed solution for this project would have meant far more delivery trucks on the neighbouring roads, which would have been an inconvenience to local residents. On a positive note, Mifflin has only needed to make one or two steel deliveries every couple of days to supply its steel erection programme.

Both Iron House and Steel House have similar designs, with the main difference being the latter structure is slightly longer than its neighbour as it over-sails the basement along the site’s northern perimeter.

Stability for the blocks is provided by cross bracing, predominantly located in the steel cores. While Iron House has one central core, Steel House has two cores, one containing a lift and stairs and serving all of the building’s floors, and another stair core that serves levels one, two and three.

Each of the blocks feature a number of set-backs, giving the otherwise rectangular buildings some architectural interest. These steps occur at level four and six on both blocks, with Steel House having an extra set-back at floor five.
The buildings will be clad with brickwork, with 90% of the apartments having retrofitted balconies installed as part of the latter works.

The Metalworks development is due to be completed by July 2020.