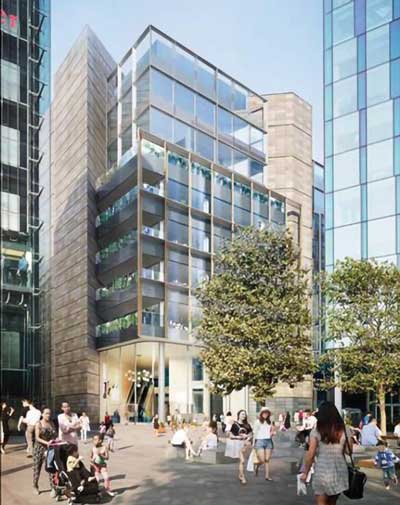 Steel construction has come to the fore as a concrete-framed central London commercial block gets redeveloped with additional floor space.

An example of this trend is 1 Triton Square, which was originally built for the First National Bank of Chicago and opened in 1997. This concrete-framed office building was the first structure to be completed at Regent’s Place, a 13-acre fully managed mixed-use campus on the north side of London’s Euston Road.

Now more than 20 years later, British Land has decided the time has come to update and refurbish the office building to meet the evolving needs of their customers and provide a modern, flexible office space, some affordable workspaces, new retail units and a new gym.

A number of criteria come into play when deciding to refurbish a building or not. These include whether the building is of any historic interest; if the surrounding neighbourhood is logistically suitable for a large-scale construction programme; the environmental impact of a demolition package as opposed to a refurbishment and, possibly the most important issue for many developers – the cost.

All of the above criteria were mulled over by the client and design team, but for the 1 Triton Square scheme, Lendlease Project Director Chris Carragher says the decision to refurbish the building instead of demolishing it was all about creating the most sustainable construction solution possible and is testament to British Land’s sustainable values.

“Refurbishing a project is a more environmentally-friendly option, as well as being cost-effective.”

According to Arup Structural Lead Andrew Robertson there have been significant carbon savings for this refurbishment compared with a new build equivalent.

“About 35,000t of concrete and 1,900t of steel have been re-used and saved from demolition. The re-use of the structure and façade elements have resulted in carbon savings equivalent to a gas and electricity emission free operation for 26 years.” 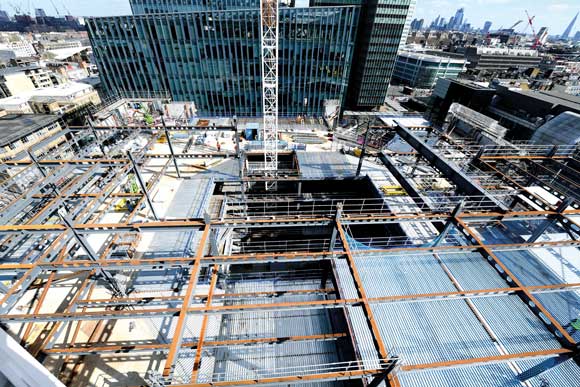 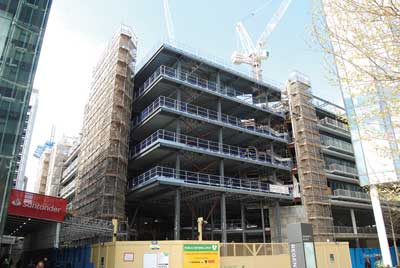 A core in the south east corner, which is split in two, has been infilled with new steelwork 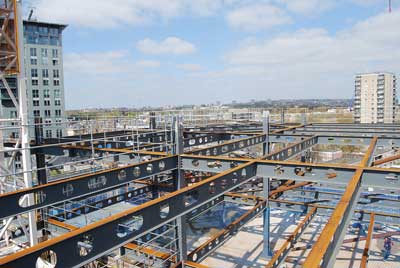 Cellular beams have been used for all new floors 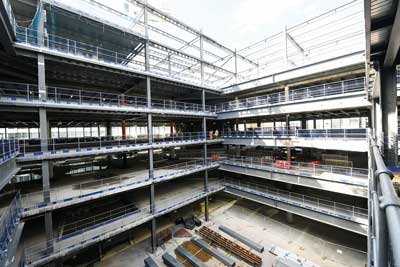 New steelwork partially infills some of the atrium, creating a smaller void

Employing the same design consultant from the original scheme, the project will see the five-storey building extended upwards with the addition of three new steel-framed office floors and a roof plant level.

Meanwhile, an unusually large 36m-wide atrium will be partially infilled with one new bay of steelwork all the way around, creating more office space for each of the existing floors and a smaller but impressive 18m-wide atrium space.

Steelwork for the new upper floors is based around a 9m column grid pattern, in line with the existing structure’s layout. For the new infill floor areas inside the atrium, a series of long beams create an open-plan floor area.

These new floor beams are all approximately 18m long, but vary in length due to the atrium stepping in and out at every floor with balconies and breakout spaces.

The atrium starts at level one, as this was originally designed as a large trading floor and extends across the building’s entire footprint and also has a slightly higher floor-to-ceiling height.

Explaining the decision to use a steel-framed solution for the project’s new additions, Mr Robertson says: “A key part of our design strategy was to employ lightweight steel-framed construction for the new floors and atrium infill framing, alongside limiting the proposed imposed loading requirements for the office floors and roof plant. This, alongside a range of innovative strengthening techniques for the existing structure, resulted in almost doubling the internal area of the building.”

Steel cores were primarily chosen because they were suited to the awkward geometry in these areas, with various riser, lift and stair openings to be accommodated. They were also simpler to coordinate with the pre-fabricated risers originally employed on the scheme.

Each of the cores is being heightened up to the top floor level with new steelwork. The core in the southeast corner is actually split into two parts (1a and 1b, but still referred to as one core) either side of a large opening that originally led straight to the central atrium. This large void is also being infilled with new steelwork to create even more office space.

All of the new steelwork is either founded on existing steel (in the cores) or concrete columns, but in the area between 1a and 1b, another solution was employed.

“Here we cut and carved the existing structure all the way back down to the basement, formed a new basement slab and cast the lift shafts out of the basement, forming a new ground floor slab and erected the steel from this,” explains Mr Carragher.

Prior to steelwork contractor William Hare beginning its package, Lendlease had to undertake preliminary works that included strengthening existing concrete columns as well as installing 180 new piles in preparation for the new steelwork.

The roof of the existing building was removed, the atrium partially infilled

This early work also included the removal of a steel-framed glazed roof that covered the atrium. Once the roof was gone, the construction team then had easier access to the central void and internal floorplates.

Before William Hare could add the new steelwork to the cores, cross bracing was replaced to accept the additional loads, while the new levels had to have some complex connections for the columns, as the original steelwork did not match the desired grid pattern and so column positions had to be realigned.

Where possible the strengthening of existing steel core columns has typically been undertaken by welding steel plates to the existing UC sections. These plates have typically been positioned between the flanges of the UC section, allowing the size of the columns to remain largely unchanged while achieving a significant increase in capacity.

According to Arup, this option was significantly lighter than the concrete encasement option, limiting impact on the structure below.

Summing up, William Hare Construction Manager Bill Fletcher says: “This has been a very complex project as steelwork had to be installed around existing retained cladding panels.

“Meanwhile, we had to work on the structure when part of the building was being demolished and so controlled safe systems of work were successfully applied at all times.”

1 Triton Square is scheduled to be completed in December 2020.

Richard Henderson of the SCI discusses some of the issues

In order to retain the accurate formatting of the equations in this piece, this article is available as a pdf download only.