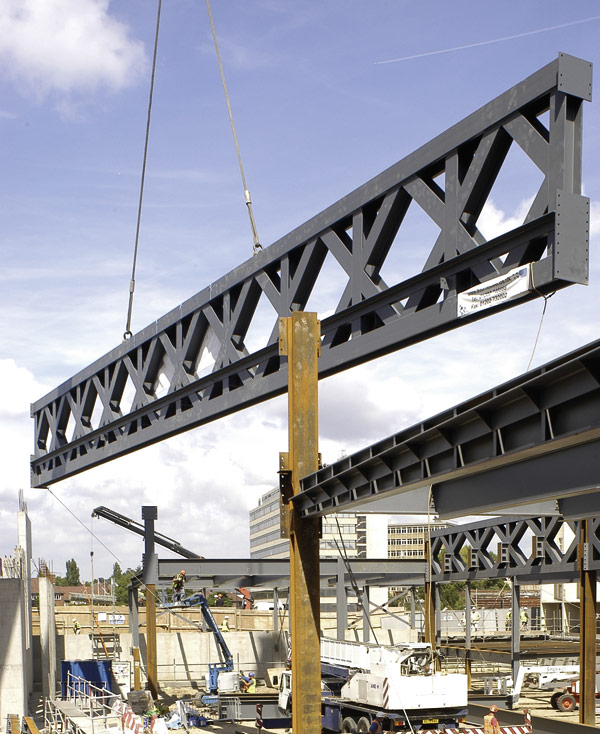 Three trusses, one of 65 tonnes and two of 55 tonnes were successfully lifted into place on consecutive days by Bourne Steel as part of a £35m refurbishment of Wembley Arena.

The building layout is being completely reversed, with the stage and entrance changing places together with a new square fronting the Arena.

Because the original ground level at the new stage end was higher, a new lorry ramp and 250m² service yard — big enough for 14 articulated lorries — had to be excavated to allow delivery of equipment for rock concerts to stage level. The three trusses, each 35m long, support the roof over the service yard. They were fabricated and transported to site as complete units, where they were erected by Bourne with a 500 tonne telescopic crane.

Bourne Steel is supplying and erecting over 800t of steel for main contractor John Sisk. In a separate contract with Sisk, Bourne is carrying out a succession of packages of internal refurbishment and strengthening inside the Grade II listed Wembley Arena building. These include installing terracing for seating, extending catwalks for access to lighting and other stage equipment, as well as strengthening the existing reinforced concrete floors by the addition of structural steelwork supports.

The building, originally the Empire Pool Wembley, was designed by Sir Owen Williams for the 1934 Empire Games. It was last used as a swimming pool in the 1948 Olympics. A temporary floor was subsequently placed over the pool and this was made permanent in 1976.

The refurbished building is due to re-open next April with a sell out show by Depeche Mode. With the construction of the new Wembley Stadium and planned redevelopment of the rest of the site, the Arena will be the last survivor of the complex of buildings on the Wembley site built for the Empire Games and 1924 Empire Exhibition.