Posted on July 1, 2005 by NSC2 in Certificate of Merit, SSDA Awards 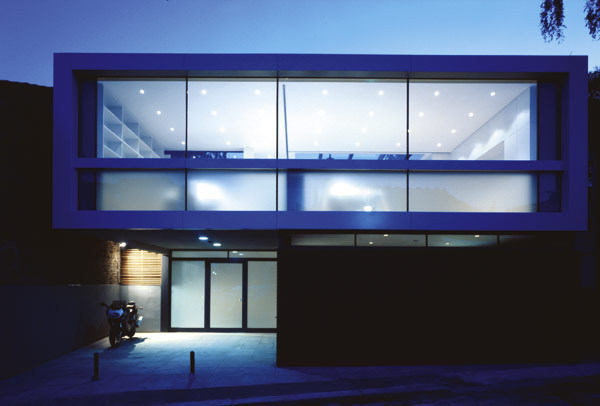 Steel framing has been used to great effect for the construction of a private house in Primrose Hill, north London, enabling creation of spacious living areas and best possible use of a constrained mews site.

The judges have awarded the house a Certificate of Merit, describing the living space as “being in a clearly expressed ‘box’ on the first floor with elegant living rooms and good views to mews and garden”.

The new house is the work of architect Springett Mackay, structural engineer Techniker, steelwork contractor Brent Fabrications and main contractor Harris Calnan. It completes a narrow mews in Kingstown Street covering a space of 12m by 12m and two storeys in height.

Selection of a steel framed structural solution has enabled full use of the available space. The main structure consists of a two storey frame of beams and columns on a foundation of bored concrete piles. On the ground floor, brickwork and lightweight partitions form bathrooms and sleeping accommodation, supported on ground beams and a suspended floor slab – below the open plan first floor living area.

This floor cantilevers out over the rooms below and provides a large uninterrupted living space. The front and back walls are fully glazed and the centre of the area – the kitchen – is naturally lit by glass roof panels which can be slid back by remote control to open up the middle of the space to the sky. 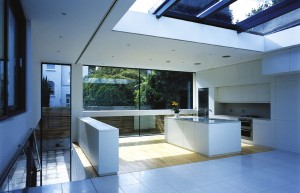 Lightweight construction has permitted wide spans. Timber stressed skin construction has reduced the overall weight of the building and use of universal beam and column sections has minimised floor, wall and roof thicknesses.

“Axial and bending stresses are allowed to develop in both roof and floor members to reduce overall deflections,” says Techniker Director Douglas Pow. “Lateral stability is provided by diagonal bracing in the ground floor and rigid joints at first floor level. This minimised column sizes at ground floor level and gave the rigid assembly desired for the open, uninterrupted space of the top floor.”

The judges said ‘steel framing behind the scenes’ enables the objectives of creating elegant rooms with good views “relying also on a clear working relationship between architecture, engineering and construction”.

It took just under 12 months to put the architect and engineer’s ideas into practice and construct the Kingstown Street house. The 15t steel frame was erected within four weeks and without setbacks, partly due to careful and accurate placing of steel base plates on the piled foundations, followed by sequential delivery and erection of prefabricated units. These were pre-assembled at Brent Fabrications’ works then cut into transportable components with joints located at points of minimal stress and relatively straightforward fabrication.

The frame was also erected with pre-camber adjustments to allow for two thirds of the movement from the anticipated dead load. The other third was simulated with kentledge, which was applied after the frame was complete and gradually removed as the building’s finishes were set out to final alignments. The end result, said the judges, “achieves the objectives beautifully”.