The principal of steel 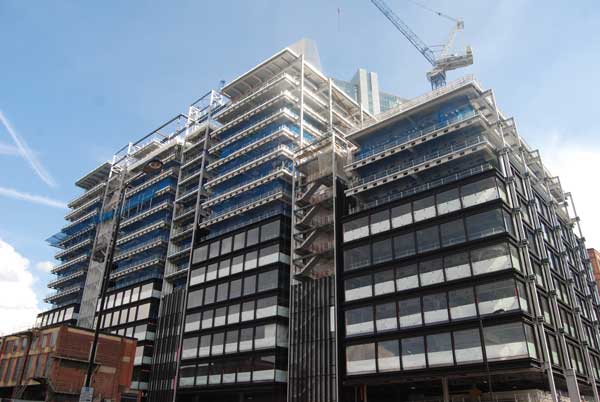 Cladding begins to be installed

Taking advantage of Shoreditch’s proximity to the Square Mile, a number of commercial developments have sprung up, including Principal Place Commercial, a landmark 15-storey development being built by Brookfield Multiplex.

Designed by Foster + Partners the 79,000m² scheme offers efficient and high density Grade A space with typical floors of 4,100m². The building will also offer retail space within its ground floor area.

The steel-framed building will also feature a 1,400m² reception area and a significant public realm, as well as two roof terraces exclusively for tenant use. All of these attributes, and with the City of London literally next-door, have persuaded Amazon, the global on-line retailer to pre-let 40,000m² of space at Principal Place.

A project on this site had been mooted for a number of years and a previous developer did begin preliminary works and installed a significant quantity of steel to form a bridge over the railway lines into Liverpool Street Station. 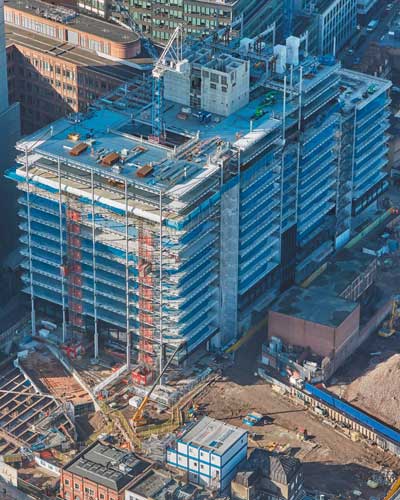 This ground level grillage of steel beams has now been incorporated into the Principal Place job, as it will form the entrance to the new building and a support for the public realm.

Brookfield Property Partners acquired the site in 2012 and immediately reviewed and improved the overall design with significant changes to the façade and interior of the scheme.

“Principal Place was always going to be a steel-framed building, but our design changes have enhanced the building and its cost-effectiveness,” explains Brookfield Multiplex Project Director David Jordan.

Prior to the construction programme starting, sports pitches most recently occupied the plot, although in the past it had been the site of a railway yard and one of Europe’s first gasworks in the early 19th Century.

“The industrial past of the site meant we had to remediate parts of the site before we could start on the building’s substructure,” adds Mr Jordan.

The site’s history went back further than Georgian times as Mr Jordan adds. “As with many central London projects, an archaeological dig was also undertaken and quite a few medieval and Roman artifacts were recovered.”

Steelwork for the superstructure begins at basement level, so once this had been dug out and the slab cast, Severfield was able to begin its steel erection programme.

The centrally-positioned concrete core, that provides the steel frame with its stability, was more than 60 percent complete when the steelwork package started. To allow both of the site’s tower cranes to be used for the steel erection, a third crane was temporarily installed by Brookfield Multiplex to serve the core construction.

“One of the main challenges for us was the installation of the basement to first floor columns,” says Severfield Associate Project Director Steve Dobbs. “They were erected and left free-standing while the reinforced ground floor slab was cast around them, as erecting them after the slab was cast would have been very difficult.” 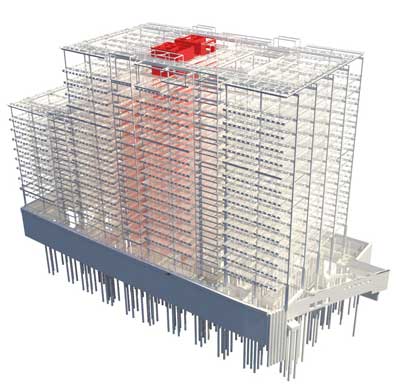 A model of the 15-storey commercial development

To allow the columns to free-stand, a series of large base plates was initially installed, these each measured 1.5m × 1m and weighed close to 1.5t each. Once the base plates were in place the columns were then attached via a welded connection.

Within the double-height basement a steel-framed mezzanine deck was also installed along with the main columns. This extra level will primarily support cycle storage facilities and plant areas.

The steel frame has been erected around a 10.5m x 10.5m grid, offering quite a lot of repetition as the steel frame went up. Two of the main features are the double-height entrance foyer that incorporates a first floor that is setback to overlook the main doors, and large 4.5m deep cantilevers that run along both of the building’s main elevations.

One of the enhancements to the original design was the addition of these two cantilevers. The columns have been set back to form these overhangs and increase the floorplates above. An added benefit has been the creation of a sheltered pedestrian walkway along the Worship Street elevation.

“A lot of work and coordination was required so we could agree the cantilever deflection criteria with the cladding contractor,” says WSP Parsons Brinckerhoff Project Engineer Andrew Woodward.

The building has a step at level 10 that creates one of its roof terraces on this western portion – the other terrace sits atop level 15 on the eastern side. As well as forming an interesting design feature, viewing corridor regulations also stipulated a lower part of the structure at the western side.

During the initial steel erection programme both of the site’s tower cranes were positioned within the structure’s two atriums. However, once the steelwork had progressed past level 10, Brookfield Multiplex decided to reposition the crane on the western side in order to help speed up the cladding installation within the atrium.

In order to support the tower crane on the steel frame at level 10, Severfield designed, fabricated and installed a bespoke steel grillage.

Also at level 10 the main core decreases in size as there are less services to accommodate for the upper floors.

“This means the steel piece count actually increases for the upper levels as more steel components were required to infill the area above the core,” adds Mr Woodward.

“Plus the roof has a significant amount of steel to form plant enclosures and a Building Maintenance Unit (BMU) support system.”

Principal Place is targeting a BREEAM ‘Excellent’ rating and is scheduled for completion by the end of the year.

In addition to the office building and the half-acre public piazza, there is also a significant residential component to the development, also being built by Brookfield Multiplex but under a separate contract for Brookfield Property Partners and Concord Pacific.

The residential tower will be completed in 2018.