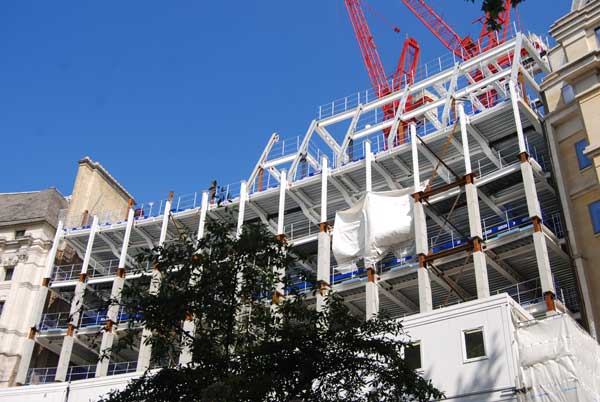 Number 8 Finsbury Circus is on a plot previously occupied by River Plate House, which was demolished in 2013 to make way for this scheme.

The new building will offer 14,800m² of offices and 880m² of retail space. The development also accommodates two main entrances, one on Finsbury Circus and the other on South Place, which will be set within a retained 1920s façade.

“After an in-depth appraisal of the site, it was decided that a completely new build as opposed to a renovation was the best way forward. This has allowed us to design a light filled modern office which is sympathetic to its neighbouring buildings on the Circus,” explains Wilkinson Eyre Project Architect Sam Wright.

A steel framing solution with a centrally positioned core was then deemed to be the best way of achieving this design.

Working on behalf of main contractor Lend Lease, William Hare has erected 2,000t of steel for the project.