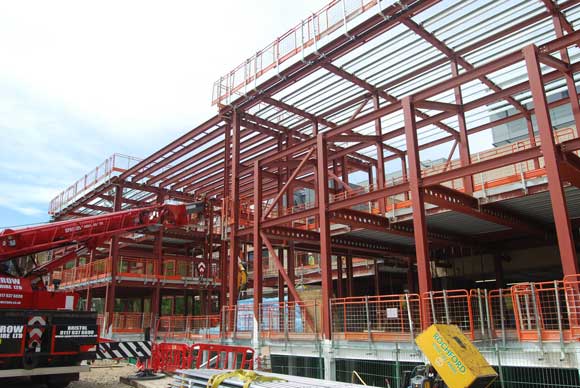 The 100m-long extension is structurally independent

Structural steelwork has proven to be the best option for a new chemistry teaching block at the University of Oxford.

Maintaining its position as one of the world’s top universities requires investment in its estate to provide students and researchers with cutting-edge teaching facilities. That’s exactly what has driven this latest project for the Department of Chemistry.

With available construction space at an absolute premium within Oxford University’s estate, the University hit upon the idea of creating a new build extension to an existing 1960s university building, incorporating underused space within this building to augment capacity.

ISG is building a new three-storey steel-framed extension to create a suite of highly-specified undergraduate laboratories for the Department of Chemistry.

The existing structure is a 1960s-built concrete-framed building and a lot of design consultation was undertaken before deciding that a steel solution was the best option for the new extension.

Although the steel frame ties into the adjoining existing structure, it is in fact structurally independent in terms of vertical load.

“It is a fully braced frame down the length of the extension,” explains Four Bay Structures Senior Estimator Tony Wright. “It takes stability from the old building in the other direction.” 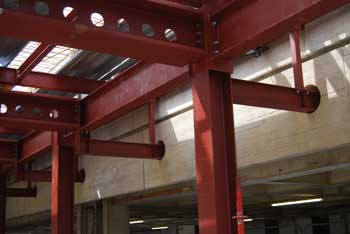 The new steelwork is bolted to the existing concrete building 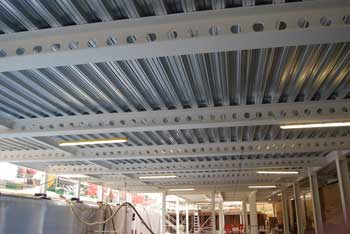 The extension is approximately 100m-long × 13m-wide, and comprises a partial basement, known as level A, with the laboratories situated above on level B and an enclosed plant zone and some offices on level C.

Level A will link into the existing building in one area to create a prep room and equipment store.

A glazed foyer and terrace with a louvred roof, which will also provide access into the existing building, divides the extension in two.

One of ISG’s initial tasks on-site was to excavate the partial basement for the extension. This lowest floor level is 2m-deep and consequently it is described as a partial basement, as the three exterior elevations will have windows at ground level, allowing natural light into the rooms.

Once a series of 10m-deep piles had been installed, Four Bay Structures were able to begin the steel erection programme.

It is a very confined site, bounded by the existing building on one side and playing fields on another. With very little room for manoeuvering or materials storage, Four Bay erected the steelwork sequentially, starting at the furthest point from the site’s road entrance.

Steelwork is predominantly set out around a regular 7.5m × 12m grid pattern, using Westok cellular beams for the internal spans.

“This is going to be a heavily serviced building, so cellular beams offered the most efficient solution,” says ISG Project Manager James Howard.

The 12m spans form the column-free spaces for the teaching laboratories in the basement and first floor, and open-plan areas for the plant and offices on the second floor.

“A feasibility study was carried out and steel was the best option for the clear spans the building needed,” explains AKS Ward Project Engineer Oliver Fyson.

“The existing building’s floor-to-ceiling heights – designed prior to modern IT heavily serviced requirements – needed to be linked into on the first floor and so a shallow cellular arrangement was the chosen solution. This accommodates most of the services and allows for a similar floor-to-ceiling height in the extension.”

A double row of columns has been installed along the internal elevation, forming a passageway and supporting the beams that connect into the adjoining concrete structure, as well as ensuring that loads are not transferred into this older building.

A composite structural solution has been used throughout with the steelwork supporting metal decking and a thin concrete topping. Metal decking has also been used to form the roof of the extension.

At roof level a row of 3.5m-long cantilevering beams form the extensions feature element. Known as the ‘Scoop’, the beams will support cladding, which will curve inwards from the top, sloping downwards towards the first floor and creating a curved façade.

The University of Oxford’s core focus on environmental sustainability has resulted in demanding targets of operational performance for the new build extension and refurbished elements in the existing building. ISG is targeting a BREEAM ‘Excellent’ rating for the new chemistry teaching laboratory.

The steel-framed extension is due to be complete by April 2018. 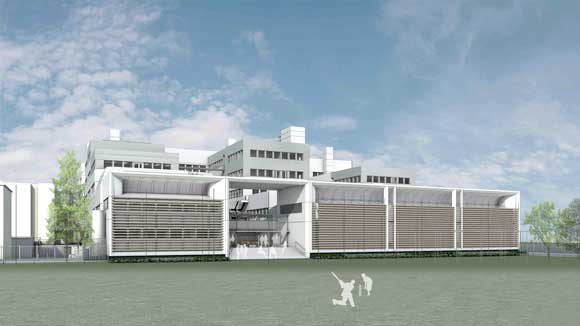