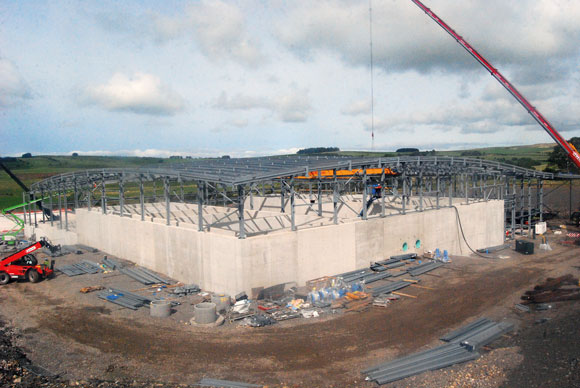 The largest building has a standout dual-curving roof

Steel construction’s long span qualities have been utilised on the largest building at the UK’s newest water treatment facility.

Located a few miles north of Cockermouth, the facility will perform a vital function for the overall project. It will treat raw water, fed to it from Thirlmere Reservoir, before a new network of pipes takes the treated water to two new service reservoirs, where it will be stored and ready to supply customers in West Cumbria.

The main driver behind the project is to provide a resilient water supply to West Cumbria following the Environment Agency’s decision to withdraw the abstraction licence for Ennerdale Lake, one of the area’s current water sources, by 2022.

Consequently, the project involves United Utilities (UU) having to link West Cumbria with the rest of its North-West England water network via a major new pipeline from Thirlmere. By tapping into the spare capacity at this reservoir and with careful planning, UU says it will make sure there is minimal long term environmental impact.

As well as the new water treatment works, the project also involves the construction of over 100km of water pipes, new pumping stations and underground service reservoirs.

A lot of consideration went into the choice of location for the water works in order to limit its impact. The site has been designed to merge into the natural contours of the surrounding environment.

“We’ve moved around 300,000m³ of earth to reshape the site and create a deeper valley into which the works sit,” explains Advance Project Manager Stewart Lucas. “Approximately 100,000m³ of that total will be later used as backfill, to bury the treatment water tank and thereby lessen the impact on the landscape.”

The largest structure at Williamsgate, housing the main water treatment facilities, is the Rapid Gravity Filtration Building (RGFB), which is a large steel frame.

Much of the steelwork is founded on a concrete substructure 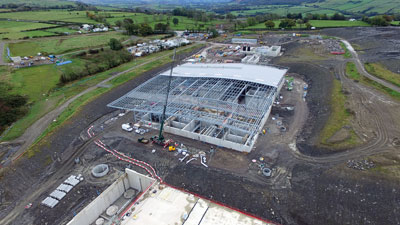 A large earthmoving programme was needed before steel erection could begin

Measuring approximately 90m × 90m, the structure has dual-curving roof, to be topped with sedum, a design specifically chosen as it will help it blend into the countryside.

“The framework to the building was designed to BS EN 1993-1-1. As the structure sits on a substructure of concrete walls and slabs, of varying levels, and has a dual wave-form roof, the design considered to be the best solution for the superstructure was a combination of braced steel frames and portalised bays where a clear span was required,” explains Border Steelwork’s Technical Manager Ian Elliott.

As well as fabricating, supplying and erecting the steelwork, Border is also responsible for the RGFB’s roof and wall cladding, including the installation of the sedum. The steel erection programme started once the groundworks and the extensive concreting had been completed.

Internally, the RGFB is divided into three main areas, an initial filtration zone, a chemical dosing area – where chemicals are added to further enhance the water quality, and a second stage filter area. All of these areas are of a different size and their internal configuration also varies due to the differing sizes of the water tanks and equipment.

Concrete walls, that compartmentalise the entire building, presented the steel erection team with their biggest challenge.

“Because of the walls, it was impossible to run MEWPs into many areas of the building, so we had to lift them into the structure by crane so our erectors could bolt the splice connections,” says Border’s Contracts Director Stuart Airey.

“We then removed the MEWPs via gaps we left in the roof steelwork.”

The initial filtration zone is five bays wide, with each one measuring up to 16m-wide. The widest central zone also features an overhead gantry crane, with its rail beams supported by the internal columns.

The fifth bay, is an open canopy which runs the length of the building, covering an access road. For design purposes, this area was treated as a lean-to in the structural analysis.

Internal partition walls for the central flocculation zone (main gallery) run at 90-degrees to the adjacent zones. This again has five bays with the largest having a 21m-wide clear span.

Lastly, the final stage filtration zone also has a longest span of 21m, in a zone that also incorporates another overhead gantry crane.

The dual-curving roof that spans the entire RGFB is formed with curved rafters in one direction, that have stepped faceted purlins between them to form the curve in the other direction.

As the roof will be entirely covered with sedum, which will exert heavier loads than a traditional standing seam roof, lateral sway/deflection had to be considered, using a 1 in 50 year return wind loading calculation.

The building’s roof also features a 2m-wide overhang around its full perimeter, which follows the curve of the roof, and contains the gutter. The design for this part of the steel frame had to consider general imposed loads, as well as the loading of a full capacity gutter.

Meanwhile, the upstand of the perimeter along the overhang was designed to consider lateral loads from the bespoke stainless steel edge protection.

Once the Williamsgate Water Treatment Works is completed in 2022 and the wider network and infrastructure is ready, the site will be capable of treating 80 million litres of water every day.

In summary, Ian Tomlinson, United Utilities Project Manager, says: “The project has been a great example of partnership working – and not just with our contractors, but also with our process colleagues who will eventually operate the treatment works.

“We’ve used the latest 4D modelling, Building Information Management (BIM) tools and virtual reality tours to specify the exact design detail, before a spade even hit the ground. That all adds up to a smooth construction process and a great final result.”